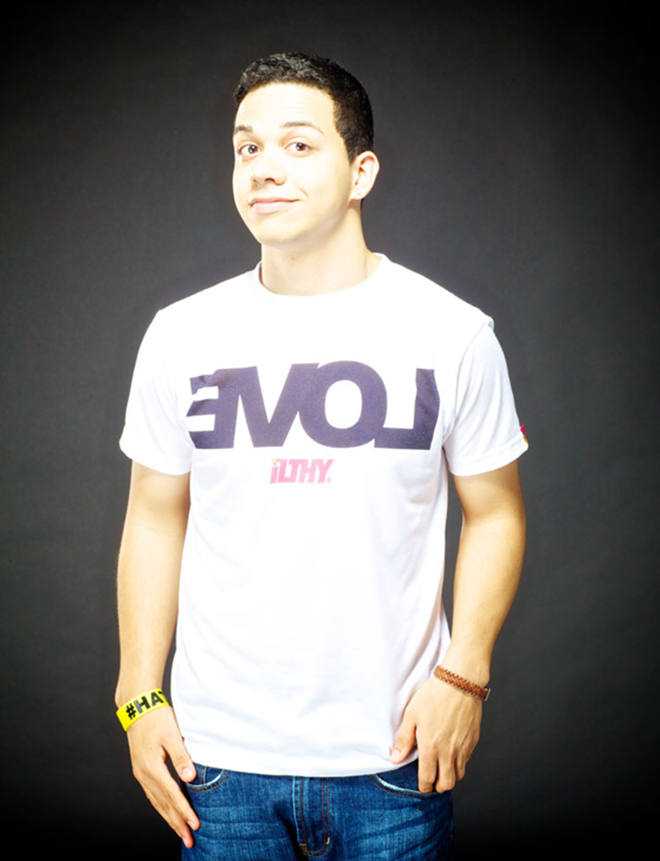 EDITOR'S NOTE: Following the initial publication of our interviews with the poets of Team Rock-It, below, we received an email from one of them, Nia Scott, who complained that we'd missed out on most of the story. You don't want to mess with Nia; she may be 15, but she stands up fiercely for what she believes (she's already written a letter to President Obama protesting arts funding cuts). Besides, she had a point. The original interviews focused more on the team's poetry than their personal histories, and also failed to mention a key player in their success: Walter "Wally B" Jennings, who helped them perfect their craft at his monthly Heard ’Em Say Teen Poetry Night in Tampa, an event that's about to get national exposure on Nickelodeon and MTV.

So consider this the augmented version — we hope it fills in the gaps, Nia.

How Heard ’Em Say led to Team Rock-It: Walter Jennings, 34, discovered his knack for spoken word at a fraternity open mic night when he was a senior at Florida A&M. “The first thing I thought was, ‘What would my life have been like if I’d been able to share these things when I was younger?’” Ever since — as a co-founder of Black on Black Rhyme and a member of the poets’ collective that organizes the Hillsborough Poetry Jam in area schools, as well as the founder of Heard ’Em Say — he’s been helping young people express themselves through poetry. For him, it’s about giving kids “a platform to talk about their experiences,” so they know “it’s okay to be you.” Through workshops and competitions during "slam season" in the spring, he helped Team Rock-It prepare for the challenge of Brave New Voices, considered the Olympics of youth poetry slams and billed as "the largest ongoing spoken word event in the world." Curtis Davis was on the Tampa team in both 2010 and 2011; this was the first year for Nia Scott and Eric Almanzar.

High verbal scores: Both times it's competed in Brave New Voices, Team Rock-It has finished in the top eight. More than 50 teams traveled to Oakland, CA from all over the country to compete this year. Eric, Curtis and Nia, all charismatic, candid wordsmiths in their own right, performed solo and with Team Rock-It East Wing from Orlando. L.I.F.E., the godfather of Black on Black Rhyme poetry nights at the Blue Shark in Ybor, says the West Wing poets are "amazing spoken word artists."

Eric Almanzar: The most polished of the group, he's done Black on Black Rhyme solo gigs and manages to come off both as a sly ladies' man and a kid just figuring things out. Example: In "Love/Hate Story," an ode to a difficult girlfriend, he proceeds through a series of rhymes that go from "godly, or should I say goddess-ly," to "honestly," "modesty" and the kicker, "Girl, you ain't as hot as me." He played string bass from third grade till his sophomore year in high school, and is now teaching himself ukelele. He has produced several hip-hop "beats."

But wait, there's more…: This is what Nia added in her email: “Eric Almanzar is a great poet — although he may appear comedic at times his passion for writing and skill should be taken very seriously. Not only does Eric make people laugh, but he makes fun of his true heart-break experiences. And I for one do not feel as if his interest in a ukulele is pertinent to his poetic potential. (You also spelled ukulele wrong).” Ouch. And… “Eric has also won adult slams, such as Sacred Sound Saturday slam, in which he has been the undefeated and defending champion for two months.”

And here's what Eric had to say about the slams: "Sacred Sounds Saturday slams take place on the third Saturday of every month at Sacred Grounds Coffee Shop. I am the defending champion of this slam and I decided to challenge myself by defending my title again this month, but with three completely new poems. Everywhere I go, I'm known as the 'funny poet,' which inspired me to show my versatility when it comes to subject matter.

Another note from Eric: "Nia, Curtis, and I really feed off of each other's energy and writing. We all have unique styles, so in spending so much time with one another, we've evolved as writers and performers. The skills that we've picked up from one another will certainly help us in the future, both as a team and individually. I must say though, I think the key to our success this year was our genuine love for one another and what we do. Wally B., Nia, Curtis, and I were never as passionate about winning as we were about getting our messages heard. That is all!"

Wally B on Eric: “I conducted Poetry Jam at his school [ Steinbrenner High] in 2009. It took me a whole year to get him to come out to Heard ’Em Say. This year I got him into the fold. He’s always been a very gregarious performer… natural, very comfortable on stage, engaging with the crowd — very funny.”

Nia Scott: A student at Blake High School for the Arts, Nia describes herself as a "poet, musician, and artist... I began writing poetry in the seventh grade and I'm looking forward to the continuance in the craft." She currently holds the title of Hillsborough County 2011 Poetry Jam winner. Remarkably cool on stage, she's a good actor, too, as in a performance of the lines, "Once I could have sworn I saw you smile, but I remembered it was, it was, it was [sneeze] probably just allergies."

“I love everything about words the older I get.” Nia started writing poetry in the seventh grade. Language arts teacher (and OWN host runner-up) Phyllis Tucker-Wicks saw her potential and cast her in plays, including a touring black history piece that led to her performing in front of big school groups twice a week.

Her brother was an inspiration, too. Phillip Scott, 25, is a recorded spoken word artist (and a trumpeter, currently touring the world in the Drumline stage show). He introduced Nia to the world of slams and open mics, where she met Wally B, who invited her to Heard ’Em Say. Along with Curtis and Eric, she began attending his Saturday afternoon workshops required for those who wanted to compete for the chance to go to Brave New Voices.

How she makes her poetry performance-ready: “I just reread it, keep adding line by line. Over time you realize you want to take a word out if it doesn’t feel right anymore… Sometimes I’ll take out a whole section because it’s slow.”

What the future holds: “I know that through words you can do so much. Even if I don’t become a professional poet I can still be someone through writing.

Have you always been this articulate? “Yes.”

Take, for instance, what she did in fourth grade: After deciding her teacher was doing too much indiscriminate butt-slapping (the congratulatory variety), Nia organized a mini-boycott and got her classmates to sign a petition. “We were having secret meetings: ‘Let’s meet behind the staircase and discuss.’” (The butt-slapping stopped.)

Wally B on Nia: “Amazing writer — very young, so she has the great advantage of having a really strong skill set in her writing and her performance. She has a comfort level beyond her years — she’s absolutely fearless."

Curtis Davis: Deceptively shy in demeanor, he comes into his own at the mic, his poetry deep and searching, as in this line: "Ever since the day I heard Otis Redding swallow a microphone so that we could hear his insides, I've been trying to figure out what it means to love and be loved."

How Curtis got his start: He started writing poetry at Blake, where he was encouraged by teacher Cassandra Curry. “All of my life I’d never been good at anything. Poetry was the first thing that made my parents proud of me.”

He accomplished plenty to make them proud: He made it onto Team Rock-It in its first year and competed in California two years in a row, and then, as a senior, he submitted a portfolio of five poems to the Alliance of Young Artists and Writers competition sponsored by Scholastic. He won a silver medal — one of only two seniors in Florida to win an award.

Sweetest part? The awards were presented at NYC’s legendary Carnegie Hall. His father drove him up. “My dad’s really a big sports buff. I never really got into it. Now I’ve found a way other than sports to really make him proud of me.” The drive up to New York, his father’s home town, was “a good father-son bonding” experience.

His poem about learning how to be a man — what was behind that? “I’m moving away for college [Florida A&M, alma mater of his mentor Wally B]… That was one of the main things — moving away. My dad always has long conversations with me about life — I quoted him in that poem. It just means thinking about becoming a man… taking with me all the things my dad has taught me.”

How he got into performing his poetry: “I didn’t start taking spoken word seriously until I started going to Hear ’Em Say two years ago in October. It really came natural to me even as a freshman… It helps me that I have a writing background.”

Wally B on Curtis: “The strongest writer of the three, very cerebral — not only from a knowledge standpoint, but he’s able to put his feelings into very creative words. I’ve been encouraging him to begin to tap into the emotion of his writing when he’s performing — he’s very reserved, tends to allow his words to lead him. The thing is, with spoken word, you’ve got to get in front of the words.”

How Wally B keeps the all-volunteer Heard ’Em Say going: The Hillsborough Art Council has been an important supporter from the beginning. Jennings says he’s made some “personal investments” to help the program, too (his day job is facilities manager for the USF Alumni Center). And he gets support from some “amazing parents,” who helped raise funds for the students’ trip to the Brave New Voices competition.

Heard ’Em Say on TV: Nickelodeon/MTV cameras were on hand for last Friday night’s open mic to film a surprise presentation to St. Petersburg poet Shanoah Washington, recipient of the 2011 TeenNick HALO (Helping and Leading Others) Award. A fan of Heard ’Em Say, Washington thought the networks were doing a documentary about her Sista2Sista mentoring program for young women, and she recommended they shoot footage at Heard ’Em Say. The segment is due to be broadcast the second week of November.

Also coming up: The 10th anniversary of Black on Black Rhyme on Tuesday Sept. 20. Details TBA, but look for the possible return of Wally B the performer.

Watch video of Eric, Nia and Curtis in performance: youtube.com/user/lifeiz.