5 guys the Tampa Bay Bucs will likely axe this offseason 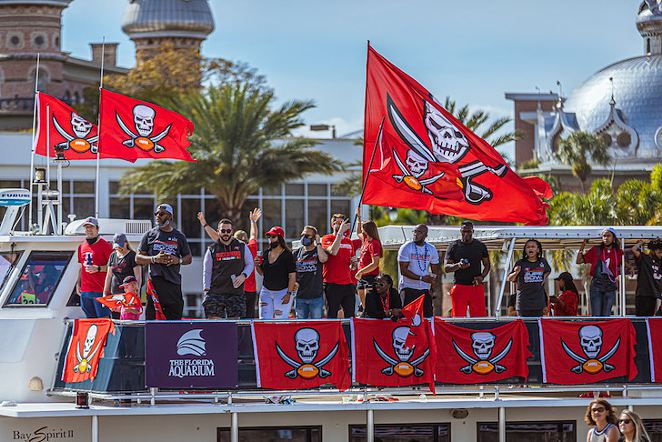 The Bucs may not have the same salary cap issues as the Saints (who are $75 million over the cap with no Super Bowl ring in the past decade to show for it), but they have a lot of important players scheduled to be free agents, and only about $27 million in cap space to re-sign them as the roster currently stands.

Last week, we mulled who the Bucs needed to resign. Now it’s time to look at a much tougher, but just as important, issue—who’s getting cut.

Really good football players get cut on a yearly basis, with guys on non-guaranteed contracts, growing old and getting replaced by younger, less expensive guys from the draft. Ask Ryan Leaf, it's just the nature of this screwed up league.

But enough of me getting on my soapbox about the NFL treating their players like shit. Here are the five Bucs most likely to be getting the axe.

Howard’s $6 million cap hit is a little less than Cameron Brate’s $6.5 million salary, and both aren’t guaranteed, but Howard’s extensive injury history makes him the Buc most likely to get cut. Brate showed that he and Tom Brady have some nice chemistry, and he is a really solid backup for Gronk. Howard has yet to play a full season without injury, however, and the most number of games he’s played is 14 (twice, once his rookie year and again in 2019). Brate hasn’t missed a game in three years. Howard is a talented tight end and will most certainly get a shot elsewhere, but unfortunately he’s not worth his salary since he seems to spend most of his time on the injury report.

See, this is what I mean about talented guys getting cut. Gholston is a high-character guy who’s been in Tampa his whole career since getting drafted in the fourth round in 2013. He’s incredibly well-liked by teammates and fans alike, but he’s scheduled to make $5.5 million next year, and since it’s not guaranteed, he could very well be on his way out. The Bucs can replace Gholston in the draft or in free agency by going after a less expensive veteran who’s willing to take a pay cut to come compete with Tom Brady (ex-Houston Texan J.J. Watt would be fantastic, but he seems to be on his way to Cleveland). Gholston’s production simply isn’t at the level that a guy making $5.5 million should be. Now, the Bucs could value his locker room presence enough to either keep him or bring him back on a cheaper deal, but Gholston might be playing elsewhere next season.

This has been a popular option for clearing cap space since last year. Smith is due to make $14.25 million this year—that's the third highest salary cap hit on the Bucs roster—and his level of play in the regular season wasn't worth half that. Smith is dependable and durable at a valuable position, but phew man, $14 million is a big number. The Bucs have that first round pick which could easily be used for Smith’s replacement, or they could flip that pick and next year’s first for the Ravens’ Orlando Brown, who recently requested a trade to a team that will allow him to play left tackle. Now, Baltimore might be looking for a much higher first-round pick for the talented former Oklahoma Sooner, but who knows, if the Bucs are willing to part with two first rounders maybe both teams pull the trigger.

Brate getting cut would mean the Bucs are either in desperation mode trying to get back Shaq Barrett, LaVonte David and Chris Godwin, or that they’re sold on O.J. Howard staying healthy and having a bounce back year. On paper, Howard is a more talented tight end. He’s faster, he has better size, and he is $500,000 cheaper. Now, the Bucs could even cut both Brate and Howard and use one of their higher draft picks on a tight end (probably second or third round) and sign a cheaper veteran as a backup for Gronk, but that seems a bit extreme. Then again, only having $27 million for three really high-quality guys is a bit dangerous, assuming Shaq at least gets at least $18 million and Godwin gets at least $10 million.

This one is incredibly unlikely to happen. Cutting JPP would only net the Bucs $7.5 million, and his production has been incredibly high during his time in Tampa. He’s an elite pass rusher, and those types of guys don’t just grow on trees. But… Denver's Von Miller could be available, with conflicting reports emerging on whether or not the Broncos will accept the team option on his contract for the 2021 season. Miller has some off-the-field issues with a domestic violence investigation involving his ex-fiancée, but the Bucs have shown with Antonio Brown that they seem willing to take chances on guys. Miller would be an upgrade over JPP, but he might cost more. Miller is more likely to be a potential consolation prize if Shaq Barrett proves to be too expensive and signs elsewhere, but Miller has a Super Bowl ring. He might take a pay cut to get another one.