Be prepared to cheer the first superhero film to confront and destroy toxic male attitudes toward female characters. 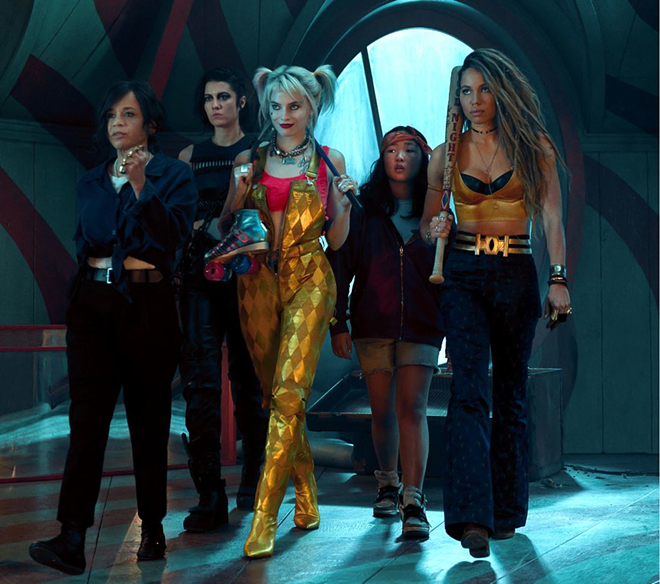 Claudette Barius
Harley Quinn, center, is flanked by Det. Montoya and Huntress to the left and Cassandra Cain and Black Canary to the right.

At least half of America—the half that spent hours during the Super Bowl spewing vitriol about a musical performance—is going to be pissed.

Less than a week after Jennifer Lopez and Shakira melted conservative faces by daring to use their collective talent to celebrate diversity and decry failed politics, here comes Margot Robbie and her posse to kick inequality square in the sack and slap the taste from any mouth that says women can’t stand on their own without a man to guide them.

“Birds of Prey (and the Fantabulous Emancipation of One Harley Quinn)” is many things, but subtle and quiet, it is not.

As written, directed, co-produced and starring some of the smartest, fiercest women to tackle a superhero flick yet, “Birds of Prey” is a delirious denunciation of toxic masculinity with a killer soundtrack and some of the best comic book visuals to appear on screen since Tony Stark first suited up way back in 2008.

“Birds of Prey” is a smarter “Deadpool” with sharper wit, a ridiculously high body count and a healthy smattering of F-bombs.

And it finally gives DC an answer to the most persistent and perplexing problem that has plagued its attempts to match Marvel Studios in creating quality superhero cinema.

Who knew that all they needed to do was move the brawny dudes to the backseat and let some badass females show the world how it’s done? Spoiler alert: everyone.

If there is a movie goddess helping to shepherd these iconic stories and characters, I trust that she will ensure that “Birds of Prey” provides a template for DC’s future output.

Because, honestly, as fans, that’s what we deserve, especially after the slog of “Batman v Superman: Dawn of Justice,” “Justice League” and “Aquaman.” Even “Wonder Woman,” for all its good intentions, didn’t fully deliver on its promise in large part due to a messy third act undermined by excessive CGI.

We deserve rich characters and intelligent storylines that reflect the world we live in, and that’s what “Birds of Prey” does better than any of its predecessors.

I can’t honestly recall the last time I watched a movie that felt so authentic in its depiction of the female experience, and yes, I am well aware that we’re talking about a movie whose anti-heroine is a borderline sociopath.

“Birds of Prey” is, at its heart, the story of a woman finding the courage to trust herself and leave an abusive relationship behind. But it’s also the story of a group of women finally taking a stand against the daily bullshit they have to endure just because of their gender.

Gotham City Police Detective Renee Montoya (Rosie Perez) works for a male superior who stole her rightful promotion by taking credit for the police work she did. She is saddled with a male partner who denigrates her. And she works in a squad room filled with piggish misogynists.

Maybe that’s why, early on, after Harley Quinn destroys the chemical plant where she and The Joker first found love, Montoya quips un-ironically: “She just publicly updated her relationship status.”

Dinah Lance, aka Black Canary (Jurnee Smollett-Bell), works for Roman Sionis, aka Black Mask (Ewan McGregor) as a torch singer turned personal driver. Lance is subjected to some truly queasy come-ons and condescending put-downs, but when she watches Sionis objectify and belittle a random woman in his nightclub, it’s the single tear that tracks down her cheek that hits home.

In that moment, Lance is every woman who has ever had to bite her tongue while a man did whatever he wanted just because he felt entitled.

Even Helena Bertinelli, aka Huntress (Mary Elizabeth Winstead), is still trying to process the pain she felt as a child watching a mob boss order a group of henchmen to gun down her entire family, but with each revenge killing that she undertakes as an adult, that pain eases a little more.

Speaking of killing, “Birds of Prey” doesn’t hold back, but even here, the film further distinguishes itself as almost every single impressive fight sequence involves women kicking the crap out of male adversaries.

As Harley Quinn says, “Nothing gets a guy’s attention like violence.”

So, why, you might ask, would I even bother to inject politics into a vibrant, unbelievably detailed funhouse ride like this?

Because this movie is nothing if not a steel-toed boot stomp to our current corrosive culture that continues to marginalize and silence the voices and abilities of women and minorities, in particular.

“Birds of Prey” is a rallying cry for female fans of all ages. It’s a celebration of friendship, of breakfast sandwiches and of one too many margaritas to drown down the pain of a broken heart.

And it’s a tour-de-force by Robbie in a role that she was born to play, just as Hugh Jackman was to Wolverine and Ryan Reynolds to Wade Wilson.