A modest proposal for dealing with gun violence 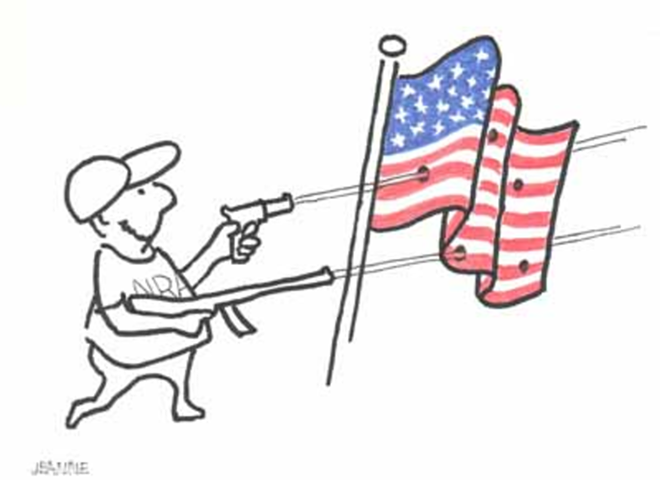 Jeanne Meinke
FIREWORKS DISPLAY: A gun policy that could make every day the Fourth of July.

Oddly enough, Americans were rocked and shocked by three recent shootings — at the military recruitment center in Little Rock, the abortion clinic in Wichita and the Holocaust Museum in Washington, D.C. I write "oddly" because these are little red droplets in the bucket of American society. We've lost our way in some violent wilderness, where we can't see the forest for the trees.

Everyone knows that over 3,000 civilians were killed on 9/11, and over 4,000 soldiers killed in the Iraq war — but how many know that America regularly has over 16,000 murders per year, often over 20,000? Among so-called civilized countries, we're the world champions.

This isn't new news, and it's clear that the suggested solutions aren't going to happen. We're simply not going to limit our ability to get hold of any kind of weapon: that seems to be unAmerican.

So here's my idea. As all the wisest self-help gurus advise, it's healthiest to go with the flow (a rather literal flow, in this case). Since we can't beat the NRA or the gun-suppliers, we should do the only sensible thing, and join them.

My proposal is to arm every man, woman and child in the United States.

There are obvious gains from this plan. First, it recognizes the way we're going; it's like taking off a girdle, loosening a belt. We're arming the world, anyway; charity should begin at home. And the NRA, having run a multi-million dollar campaign against Obama, fearful he'd reinstitute the ban on assault weapons (which expired in 2004), could use the saved money to set up universal training sessions.

Second, this could be a major part of the stimulus plan. The only things America seems to make well these days are weapons — one of our few successful exports, especially to Asia, South America and Mexico — so we should build on our strength, creating more weapons and ammunition factories and outlets across the country, which should make a big dent in our joblessness problem. The world, which has lost respect for us in most areas — health care, education, morality — does recognize one thing: in every battle, whether we win or lose, our soldiers kill the other soldiers at a ratio better than 20 to 1.

Some will object that this plan will arm the criminals as well as righteous Americans. But the NRA has often told us that the criminals already are well-armed, so this will affect them scarcely at all. A similar objection might be that putting deadly weapons in the hands of children could be risky. Again, it's been proved over and over that children, like criminals, can always get a gun when they want one; they're experts at finding whatever weapons Uncle Charles has hidden in the house, and waving them around to the great distress of those nearby. Far better to give them the guns early, as we do with iPods and laptops, and train them in their use.

Get everything out in the open. Apply the Sunshine Law to firearms. Children could be given small pistols like 380 ACP's; semi-automatic rifles like the popular AR-15 wouldn't be available until the child turned 13. Many people could be employed at Testing Stations, to verify the applicants' ages and abilities. A vision test, as with driving, would be included; those with truly poor vision could be supplied with army knives, or if in good shape, sabers of various shapes and sizes (the Polish sabre is a simple and versatile example).

Third, a growth in subsidiary industries will naturally result: hospitals, morgues, cemeteries, medicines, organ transplants, bandages, how-to books. It's been shown that a single murder will employ hundreds of people, beginning with the detectives, through cleaners, reporters, doctors and record-keepers, ending with the gravediggers or urn-makers. A whole new line of sympathy cards will spring up; new fashions, stylistic bullet-proof bras, à la Madonna's, will become even more popular; more gun ranges, silencers, barbed wire and bugles; the list is endless.

Even better: this modest proposal will result in not only more jobs, but fewer people, thus addressing overpopulation, another major problem. Still, some might complain, what about the perplexing problem of immigrants? I would advise handling it thusly: No guns for illegal immigrants, which, I think you will agree, will finally discourage them, as they realize they'd be the only unarmed people in the whole country.

And finally, I hope that when President Obama sees how well my plan works, he'll follow the example of Kentucky's New Bethel Church, and declare Bring a Gun to Church Day an annual event, with fireworks like the 4th of July.

I want to emphasize at the conclusion that I have nothing to gain from this proposal. We have no financial interest in any munitions or arms factory, nor are we connected in any way to the nursing or prosthetics business. Jeanne and I are already as armed as we'll ever be, the bars tight in our windows, the alarms set — and we're prepared to enjoy life like any other red-blooded Americans.

—Peter Meinke (www.petermeinke.com) was an Army sharpshooter in the 1950s, but on rainy days his glasses are a great handicap, so he relies on his Louisville Slugger in close combat. Jeanne's eyesight is perfect, but her hearing is delicate so she thanks in advance those of you who use the above-mentioned silencers.