A run for your money

5Ks, half marathons, fun runs: In an increasingly crowded running industry, the competition is heating up both on and off the field. 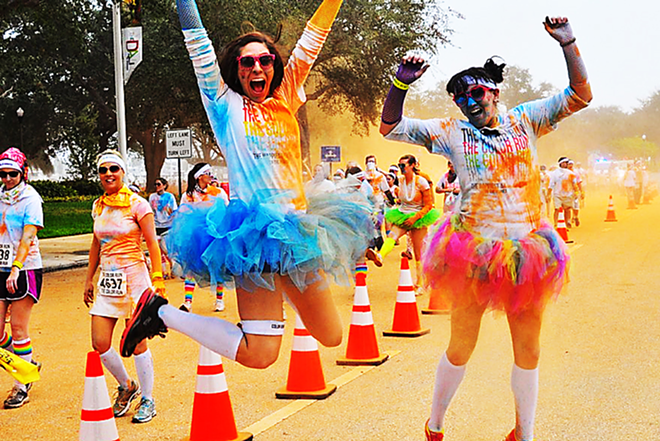 Khalid Hameed
THESE COLORS DO RUN: In its inaugural year the Color Run drew an estimated 15,000 participants to downtown St. Petersburg.

Editor’s Note: Heidi Kurpiela submitted this story to CL on April 14, timed so that we could run it on April 25, right before the St. Anthony’s Triathlon weekend. Then, on April 15, about two hours after we’d been conversing via email about photos for the piece, the bombs exploded at the Boston Marathon.

I asked Heidi if she wanted to rework the story in light of the attacks. Her answer, essentially, was no, and her reasoning sums up the resolute spirit of the running community:

“Other than to say that the folks at St. Anthony’s have upped their security measures in light of this situation (which they have), I don’t know what else can be said that hasn’t been said … Coincidentally, in the middle of writing this email, I got a call from the organizer of the 5K Zombie Run, Darren Dietsch. His wife is a marathon runner. I asked him if it would be tactless to run the story [now]. Here’s what he just said:

‘If anything, my wife was kind of like, you can’t stop us. You’re gonna try to stop people who run through pain? We are not deterred … and when we stop doing the things that our freedom allow us to do, that’s giving into the terrorism and letting them win.’

For runners and triathletes racing is an inherently jubilant experience. This is why the 5K and half marathon industries have grown so much in the last few years. Those of us who compete in athletic events do it because we feel happier and stronger as a result of our efforts. While it’s understandable that we respond solemnly to the Boston Marathon tragedy, it’s OK to regard running for what it is: a celebration of the body and spirit. No act of violence can take that away from us.”

If there’s one thing I’m looking forward to at this Sunday’s St. Anthony’s Triathlon, it’s that I won’t be forced to pretend like it’s super fun to run with goofballs disguised as athletes.

Call me a party pooper, but I’d rather train for four months and fork over $200 in registration fees so I don’t have to pass mobs of “fun runners” in tutus and knee socks taking cell phone pictures of their friends in the middle of the course.

But then again, I’m a stick in the mud, and most people would rather just get drunk and do a mud run.

With so many events vying for our adrenaline, rivalries are bound to crop up. As the industry expands, local race directors are facing stiff corporate competition. When St. Petersburg hosted its first Rock ’n’ Roll Half Marathon in 2012, not all area runners were stoked.

According to press reports at the time, Pinellas County race organizers Chris Lauber and Dawna Stone were agitated when they learned that the city of St. Petersburg kicked in $30,000 in subsidies (on top of the $100,000 spent by the St. Petersburg Area Convention and Visitors Bureau) to a race promoted by Competitor Group, Inc., a for-profit company based in California. Local race promoters rarely benefit from such largesse. Lauber, who runs the Florida Halfathon race series, and Stone, who founded the Women’s Half Marathon, also argued that the race, which drew 7,000 runners to St. Petersburg, would steal participants away from their Tampa Bay events.

“Certain corporations have moved into the territories of existing race promoters,” says Lynn Gray, a longtime Tampa runner and coach. “There is big-time dissonance in the community.”

I remember when only the leanest Prefontaine types ran marathons. Now anyone with a free Sunday morning, cheap running shoes, a feather boa and a modicum of cardiovascular strength can pound the pavement for a few miles. Hell, running shoes aren’t even necessary. Last fall, hundreds of men and women in pink stilettos galloped down Fifth Avenue in Naples to raise money for breast cancer awareness.

I know it was for a good cause, but seriously … When did running a 50-meter dash in high heels become an athletic accomplishment? Are twisted ankles really a badge of honor?

Stiletto Dashes, or Stiletto Stampedes as they’ve been dubbed by the race industry, are downright humdrum when you consider that people are willing to fork over serious bucks to be chased by zombies in Florida’s swamplands. The 5K Zombie Run, which was held Dec. 22 in Dade City, cost $90 to run and $25 to watch. Even the undead had to pay to get on the course. For $60, participants could “hunt” runners for 90 minutes, after undergoing a professional zombie makeover. The event’s race slogan: “The zombie apocalypse is coming. Will you survive?”

“There’s very potent marketing going on here,” Gray says. “You give these things a cutesy name or a tremendous theme and you capture people’s attention. The half-marathon is one of the fastest growing races in the athletic world. Why? Because (organizers) are making them fun. Anybody can run now. You put on a costume and you run … or you walk really fast.”

Gray, a retired schoolteacher, doesn’t see the harm in making fitness more entertaining. A runner for 47 years, the 60-year-old has logged 94 marathons in 22 states. She knows not everyone is in it for the love of the sport. Gray saw the industry shift when Muddy Buddy, a popular bike-and-run mud race series, came to Orlando in 2006. The first mud run to go national in the United States, Muddy Buddy cleared a path for dozens of imitators, including major corporate operations such as Tough Mudder — a 10- to 12-mile obstacle course designed by British Special Forces — and Warrior Dash, an extreme 5K mud run with obstacles and a costume contest.

The Bucs beat a really a bad football team, but at least they made it fashion