An international version of our American Loving biracial romance. 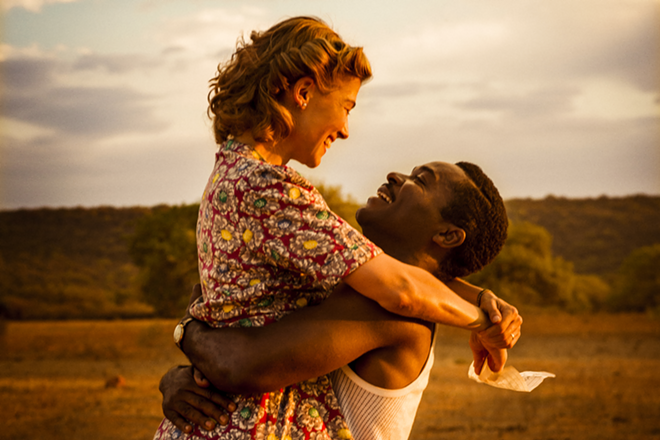 Fox Searchlight Pictures
David Oyelowo and Rosamund Pike in 'A United Kingdom'
Africa is a massive continent, and it must be filled with a million stories worthy of cinematic enshrinement. After all it’s the home of the original homo sapiens and ancient cultures as accomplished as Europe and Asia. And it’s a world of fantastic landscapes, an imperial playground, a colonial house of horrors, filled with rampant corruption and greed, and noted for the barbarism of the slave trade and apartheid. So many stories, so little time.

But to make sense of any of it, especially if a film is to achieve a worldwide audience beyond Africa’s boundaries, the narrative must be simplified. And what’s simpler and more time tested than star crossed lovers and their thwarted love? In Amma Asante’s A United Kingdom, potential themes the size of the African continent itself are reduced instead to a familiar romcom approach where boy meets girl, families reject the interloper, the couple prove their staying power, and everyone finally comes around to celebrate true love.

Even with that reduction, this film is still an accomplished, compelling look at a remarkable slice of history likely unfamiliar to most of us. Indeed, the film is based on a true story from the post war 1940s when a white English office clerk meets a black African student studying at Oxford at a missionary society dance in London. They kiss, they walk through London fog, they declare their love, he reveals he’s a royal prince, they are taunted by racist slurs, they marry, they consummate in a fade out, they travel to Africa and are equally beset by forces that threaten to defeat them. Out of Africa meets Guess Who’s Coming to Dinner.

Based on Susan Williams’s powerful book Colour Bar, this film directed by Amma Asante (Belle, 2014) and with plodding screenplay by Guy Hibbert, brings to life the story of Seretse Khama of Botswana and his efforts to claim his royal ancestral throne, with his white wife, Ruth Williams, at his side. They must contend not only with their marriage upending centuries of social and cultural expectations, they also have to navigate the politics of Great Britain and its alliances with neighboring South Africa. To tolerate, much less approve, this biracial marriage between a Brit and an African is to jeopardize the economic realities of the mineral trade, gold and uranium, with South Africa and its recent codification into law of apartheid.

These star-crossed lovers have not only disapproving families to deal with but now a disapproving royal Empire. When Sereste speaks to his own outraged people who cannot imagine a white woman becoming their nation’s symbolic Mother, it’s reminiscent  of Edward VIII’s abdication speech in 1936 when he tells the British nation that he finds it impossible to carry the heavy responsibility and duties as King without the help and support of the woman he loves. Still, Seretse and Ruth persevere, arguing for his rightful inheritance and their legitimate love in the face of blistering familial and political disagreement over this mixed race romance. The Duke and Duchess of Windsor could have learned from their lessers how to out-maneuver all that crude political power and age old cultural sanctions against such relationships. 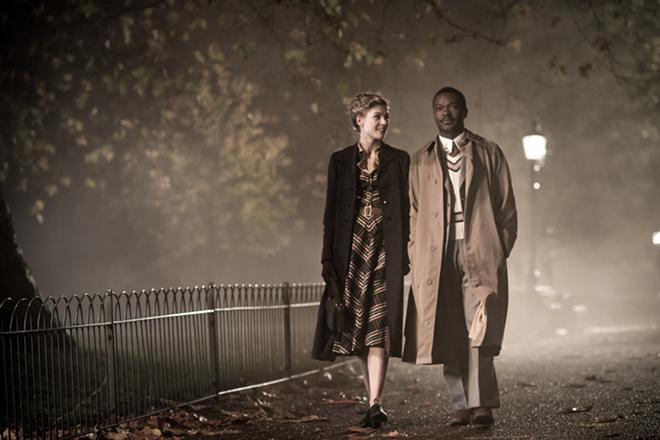 Fox Searchlight Pictures
Rosamund Pike and David Oyelowo in 'A United Kingdom'
It’s a well intentioned, albeit earnest, film. It’s also bloodless, if not literally (there are a couple of bloodied noses), then certainly passionately. Rosamund Pike (Gone Girl) as Ruth and the magnificent David Oyelowo (Selma) as Seretse embody the hopeful ideals of a post-war world even while confronted by bitter and angry bigotry. Ideals, though, need some piss and vinegar; otherwise the hagiography spotlight blinds you to the very human characters beneath the halos. Let’s not forget it’s a true story, and it’s obvious that the real Ruth and David loved and cherished one another, but in this movie there is little chemistry and even less electricity to propel the love story forward.

Oyelowo was such a powerful embodiment of Martin Luther King in Selma (2014) that he may forever be typecast by that portrayal of long suffering nobility. More than once as I watched Oyelowo, I wondered why was MLK making a cameo appearance in this movie. Both actors are given big sweeping speeches with always the right pithy observation at just the right time — ”I see an Africa that’s about unity, inclusion and equality.” or ”No man is free who is not master of himself.” or “Not everyone agrees with what the government does on their behalf.” — but such things sound more movie talk than real talk, and certainly not pillow talk. I wouldn’t have been surprised had either of them begun to channel Lord Nelson at Trafalgar, “England expects every man to do his duty.”

Fox Searchlight Pictures
King Seretse Khama of Botswana (David Oyelowo) and Ruth Williams (Rosamund Pike) and daughter in 'A United Kingdom'
The actors are beautiful, the cinematography David Lean worthy whether it's London fog or golden African sunsets, but the dialogue is convoluted and preachy, the editing occasionally disjointed and disorienting. The Brits are unfailingly polite yet vicious, the Africans understandably wary of outsiders.  London is a city of fusty rooms and claustrophobic places, the perpetual wet and fog obscuring people and ideals. On the other hand, Africa is dry and dusty, but with wide open vistas and clear starry skies, suggesting an openness and willingness to accept a changing political and cultural landscape.

For sure, it’s a big story, this attempt to bridge the racial divide. Hollywood has not done the best in bridging its own racial divide in the stories it chooses to film. However, recent 2016 movies such as Loving and Hidden Figures, both based on real life events, added to the originality of Fences and Moonlight, and now this year's A United Kingdom, suggest that perhaps finally we are beginning to make films that let us view not just the color of our skin but the content of our character.