Adventures in Weekending: 10 things to do in downtown Tampa this weekend

It's Fourth Friday, which, in downtown Tampa, is kind of a big deal. Plus, Tampa Bay Comic Con's happening, so there are some super things happening and some comical things, too (see what we did there?). Downtown Tampa comes alive on Fourth Fridays, so make sure you don't start your weekend late. Plus, you know, you've earned it. It's been a hell of a week, it's hotter than a manatee's teat out there and it's time to cut loose. So, what are you waiting for? Get out there and weekend.

In honor of Tampa Bay Comic Con, Downtown Crawlers has organized a comic con-themed scavenger hunt that starts Friday night and ends Sunday. And you thought you'd never use that Catwoman costume again.

2. Enjoy Arts on the Patio.

Get your art fix at the event that's got it all: Le Méridien Tampa teams up with a variety of local artists to display art on their front patio. It's a sort of mini-event horizon of local artists, including Illsol, Tes One, Chris Parks, Phil Holt, Sarah Guiffridda, Chad Cardoza, Cam Parker and Bekky Beukkes — among others. Then saunter over to...

3. Watch bartenders duke it out at Battle of the Bartenders. Bizou Brasserie pits their own bartenders against each other — the managers, no less. Bizou managers Dawn and Andrew duke it out in a "friendly" cocktail competition. They'll both mix up $8 creations: Andrew's, a Kivvi Fracasser and Dawn, a Tropical Escape, and whichever one sells the most of their drink gets crowned winner. Don't overdo it, though, because you still have more to do at...

Come on, you know you want to go. What? You're not into comic books and super heroes? That's cool. Go on Friday night and see me and my buddy Tim Dorsey in a super-intellectual panel discussion about... hell, I'd wager at some point in the panel we'll talk about his Serge sex scene in front of the Gulfport Casino. Point is, it's not all about superheroes and it's a ton of fun. Plus, if you go Friday night you can see other cool shit in downtown Tampa, like the...

5. Tour of the century at Le Méridien.

It only happens once a month, and it doesn't take long — only about 30 minutes — but this tour gives you a glimpse back into old Tampa (the building dates to 1905). Maybe the building has some ghosts, too — I mean, we don't know, but hope springs eternal, right? Also, if you go you get 10% your dinner at Bizou. Since you're already going to stop by for the bartender battle thing, why not, right?

6. Attend the opening reception of the International Photography Competition exhibit. These are, literally, the best photos in the whole world (as judged by the Florida Museum of Photographic Art). Photos are fun to look at, FMoPA is a gem of a museum (plus, their address includes the word "cube" which is plain old fun) and Fourth Fridays there include artist talks and other goodies. That's a pretty full Friday night so far, you know?

7. Get really hyper with hyperrealism at the Tampa Museum of Art. 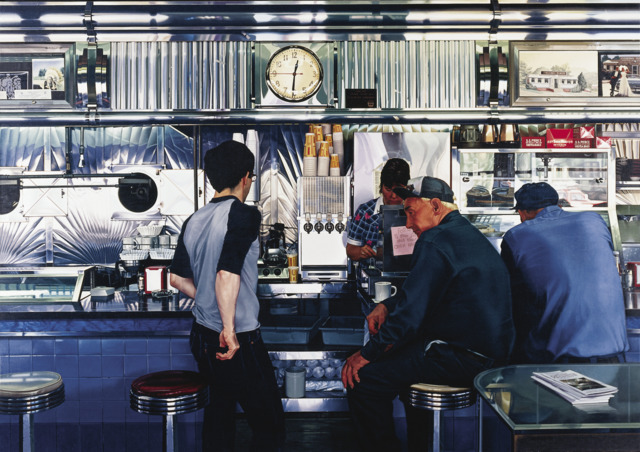 See that up there? That's a painting. We swear. When you get realllllly close to it, you can tell — and you can also see all the intricate details the artist included, sort of like a hyperrealism Easter egg. These paintings are relatively new to the art world — the form really took shape in the 1960s — and this is the only place in the United States this exhibit will tour on its international rotation.

8. Fight for your right to health care.

You've been putting up with a lot of shit lately, but Congress's latest attempt to wrest healthcare from those who need it the most is political skullduggery at its foulest. If it's not you that'll lose healthcare under the pending repeal of the Affordable Care Act/Obamacare, it's someone you know. People are going die — or lose the Medicaid-funded tools that help make them productive members of society. Sure, Marco Rubio doesn't give a shit what you think. But you can hold him accountable by showing up to Saturday's press conference and rally, which a coalition of groups from Planned Parenthood to Mia Familia Vota. Go ahead. Make some noise. You know you wanna. For more info, or to share your health care story, contact Stephanie Garza at [email protected]. —Kate Bradshaw

OK, so you're not going to have sex on Cloud Nine, because it's a play, but hey, we have your attention, right? But it's a fun show at Jobsite, and, as Bill DeYoung describes it, it's grounded in whimsy and weirdness. It's been a bitch of a week and we could all use more of that right about now, couldn't we?

If we were classier, we'd say this better, but they have a shit ton of kick-ass old Cuba and Florida maps at the Tampa Bay History Center. They also have some cool old tourist stuff from when Henry Plant's railroad dropped people off at Henry Plant's steamers and took them to Cuba. You know what? Just go. I mean, read this first, but then go. Totally worth your time.