Baby, it's cold outside. That was not supposed to happen... 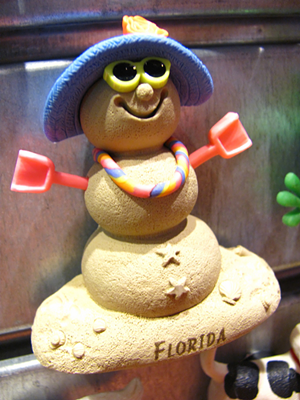 EvelynGiggles
This is about as close to winter as I like to get.
When we went to print this week, I had a whole clever little bit about skipping winter, but then I wake my ass up this morning and I've got goddamn icicles outside my window.

OK, maybe I'm exaggerating, but it's cold. Cold enough that I'm jealous I'm not judging the Grand Central Chili Cookoff (they asked music editor Ray Roa instead). It's cool, though (literally) — I'm headed to Dunedin and Palm Harbor to research the Beer Issue (of course, I can't drink any) while the rest of the folks shiver in our old cigar factory and prep for Meet the Brewers. How do we do that? I’m glad you asked. Come with us as we pre-game for Tampa Bay Beer Week. We start, of course, at the mother of all local breweries, Dunedin Brewery. And, you know, since we’re here, may as well hop over to Casa Tina for chayote and a caipirinha (Dunedin is the new black, far as I can tell, because I can’t get enough of its downtown lately). Don’t forget to get creative with your drinking — head to Paper & Pints with Ringling College (in St. Pete’s southside).

If the cold holds, you'll be glad Williams Park has gumbo on Saturday, because it's the perfect southern cold-food fodder. Earlier in the day, take a stroll through Gulfport at the #BecauseGulfport walking tour; later in the day, head to the Iberian Rooster for the Fringe Fest pre-fest (I like saying "fest").  Feeling romantically artsy? Check out Night Blow at the Morean's Hot Shop. Night Blow, believe it or not, is about glass , not synthetic white powder. Although, hey, you never know where the weekend will lead...

Sunday, learn to cook collards at Sweetwater (trust me, they're yummy), or grab a burger at the District Tavern and watch the incredibly pampered (and incredibly adorable) pups frolic in the adjacent doggie park. From there, walk over to see The Aliens at Stageworks, then, hey, dinner at Drama Burger, because our food editor flippin' loves that place and if I don't mention them regularly, she gets antsy. Plus, it's pretty tasty stuff (I mean, pastrami fries? Come on!).

You can't be too safe, Loafers — you should probably break out those closed-toe shoes for this one. Whatever you do, though, stay warm in this unbearable spot of winter we're having.