And the winners of the Tampa International Fringe Festival lottery are…

Trish Parry pulled 33 names out of a sombrero Saturday afternoon during a convivial gathering at Ybor's New World Brewery.

And just like that, the first Tampa International Fringe Festival was off and running.

Parry, Will Glenn and David Jenkins are the team behind TIFf, which will follow the model originated many decades ago by Scotland's Edinburgh Fringe Festival in which performers and companies in multiple disciplines (theater, dance, music and lots of wild and crazy) enter a lottery for the chance to stage their work in venues throughout the city. Festivals all over the world have replicated this model, in cities as close as Orlando and as far away as Adelaide, Australia, but this will be Tampa's first such fest. It's slated to take place in Ybor City May 11-14, 2017 — in Parry's words, "a ton of shows and a big party for a long weekend." (TiFf is not to be confused with CL's curated mini-Fringe, the GASP! festival at the Tampa Museum of Art Mar. 31.)

Hopeful artists and interested onlookers listened intently at New World as Parry drew the names, with volunteers' smartphones sending out the proceedings to those not able to attend. With 43 applicants for only 28 slots — and half of those slots reserved for local artists — there were sighs of resignation as well as victory whoops after the names were announced, but as Parry pointed out, acts whose names didn't get selected still have a chance to get it via the waiting list. 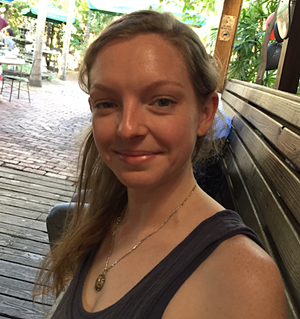 Theatre eXceptional Artistic Director Brianna Larson was one of the locals in attendance who liked what came out of the hat. "I'm very excited — we were a little anxious," she said upon hearing that her company would get to do its production, Tyler's Time Out, starring her talented younger brother in the title role of a show inspired by Pee Wee's Playhouse. Theatre eXceptional is dedicated to creating innovative theater and performance art with, for, and about people with disabilities. "We were still going to try and produce it anyway," she said of the show, but the Fringe opportunity guarantees them three performances with technical and promotional support and a venue. (Fringe artists pay a $25 application fee and a $100 registration fee once selected; they get to keep 100 percent of ticket proceeds.)

Another local who liked what he heard was Lakeland actor/playwright Thom Mesrobian, who will be premiering his play Callbacks at the Fringefest. The premise — two older actors at the end of their careers find themselves working in theme parks — reflects his own experience; he's been a theme park actor for 11 years, including a stint as conductor of the Hogwarts train at Universal's Harry Potter attraction. He'll likely be in his play, but first things first: "I have to go home and finish it tonight."

The lifeblood of any festival, especially a new one, is the volunteer corps. Chris and Briget Hart were present at the drawing; they've already signed up to volunteer and house visiting artists, and if their enthusiasm is any indication, TiFf's prospects look good. But then again, the Harts are a hopeful sign for the Tampa Bay theater community as a whole; the 40something Seminole Heights couple go to everything — professional theater, community theater, even high school theater — and (wonder of wonders) don't mind crossing the Bay to see stuff. "We like local theater better than movies," said Chris, who's the "graphics dude" at Alessi Foods. And, added Briget, "We don't mind trekking around.” (Someone build these people a monument.)

The lineup for TiFf is subject to change, in case any applicants decide they aren't interested after all, but here's how it stands after Saturday's drawing.

Behind the Front Lines: Warriors and Wives, theatre nomads

For further info and continuing updates, go to tampafringe.org.