A trifecta day at the Sarasota Film Festival

Yet another day at the Sarasota Film Festival involved viewing three films back-to-back-to-back, one after the other, with just minutes between showings for contemplation.

This time the schedule included two foreign-language films and an American film. First wasThe Seen and the Unseen (Indonesian/Balinese), a fantastic fable of 10-year old twins facing a brain tumor diagnosis and otherworldly encounters with indigenous mythologies. From there to The Queen of Fear (Argentinian/Spanish), a rather unfocused melodrama of an actress in endless rehearsals for a one-woman show that's to open in days but she seems clueless what the show is about and preoccupied with a best friend dying of cancer. Then finally, 1985 (American), black-and-white drama of the early days of the AIDS crisis as one young man returns home to Texas to tell his parents that he’s dying.

Whew, just the luck of the draw to confront mortality and desperate search for meaning in such dramatic ways on the silver screen. While the Florida afternoon blazed away outside the multiplex, the SFF patrons soldiered on.

All of which can make for a rather unsettling, out-of-body experience as you’re in darkened theaters for six hours, watching cinematic archetypes of resurrection, reincarnation and redemption. Sitting in blackness and staring at the light while the images dance across your mind — sorry, I cannot but think of Plato and his cave of shadows — can be surreal. Of course, what is cinema, anyway, if not sur-reality? Then you get up and leave, return to the sunshine, encounter real people in the lobby and parking lot, and drive home across the Skyway to return to your own non-cinematic life. When your big-screen encounters are as complex and cumulative as these three films today, re-entry doesn’t come easily.

Variety
Kamila Andini's The Seen and the Unseen, in Indonesian/Balinese with English subtitles

The Seen and the Unseen, Not Rated, directed by Kamila Andini, in Balinese and Indonesian with English subtitles, starring Ni Kadek Thaly Titi Kasih and Ida Bagus Puta Radithya.

Twin brother and sister Tantra and Tantri suffer together when Tantra is diagnosed with a brain tumor and soon loses his senses. The film is a fabulist exploration of these twins and their relationship and how the Indonesian landscape and mythology give supernatural meaning to such cruel death. It’s obvious that the chicken and the egg are important symbols to this culture as in an early scene where the sister stands at the hospital room door, a raw egg in her hand, while her brother lies senseless on the gurney. She slowly crushes the shell, the albumen and the yolk dripping out of her hand onto the floor, a lyrical and literal life being crushed. Then the film flashes back to a more idyllic time in their childhood, a time of ritualized shadow-puppet shows from midnight to dawn, rice planting (even using a discarded IV bag as a watering can), exploration of the eerie forest in moonlight, and you guessed it, more eggs, this time eaten, stolen, or hidden in shrines to the ancestors. There are vicious cockfights, followed by the children reenacting such fighting roosters, costumed in palm leaf feathers and spurs. Another ghostlike game involves children curling themselves into egg-shaped ovoids and rolling around on the ground. It’s mysterious, it’s enigmatic, it’s other-worldly. It’s traumatized children trying to figure out why we die, and what happens when we die.

The sister plaintively asks her dying brother, “What happens to the moon after it becomes full?” and gets no answer. Are we reincarnated into monkeys? Certainly the monkey is another animal important to indigenous Indonesia, and here the surviving sister takes on the form and antics of a phantom monkey, jumping and scratching and screeching in a spectral rage to express her grief over her brother’s death. The ethereal photography of a dreamlike death and mourning, the hypnotic music and singing, the attention paid to lunar/lunatic light, the blend of Balinese arts and spirituality carry the film's meaning by far more than the rather thin plot. Director Andini and cinematographer Anggi Frisca have given us a cinema treasure, an impressionist look at this ancient land and its ancient mythology. But it's going to take a very supportive arthouse and film festival audience to fully appreciate the subtleties and nuances of this film. 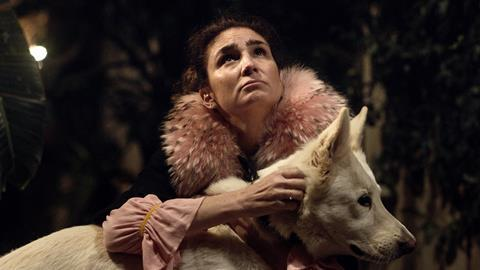 screendaily.com
Valeria Bertuccelli, director and star of The Queen of Fear, in Spanish with English subtitles

It's a rather unfocused, meandering, perhaps pointless film that attempts to explore contemporary life and its complexities, all through the lens of hopelessly distracted actress. Once again, we are expected to believe that the prime metaphor to explain our existence is the notion that an Actor with a capital A, struggling to perfect her craft and deliver her art, is what best conveys our own struggles for meaning. Are there really acting lessons that ask you to imagine yourself dead and pretending to be a rock? Sorry, not buying that incestuous notion from the film-making coterie that the career of acting is tantamount to explaining our lives. For sure, stage fright and inability to move forward is likely something we all experience, and for sure for an actor, it could be life-defining if not career-ending. Bertuccelli co-directed, wrote the screenplay, and plays the main role. It’s a haphazard and aimless performer at the center of the film, and even the best of actresses would be hard pressed to convincingly convey this desultory aimlessness, even on a jaunt to Tivoli Gardens in Copenhagen. As some have suggested, there’s probably a bit of meta-frisson in Argentina watching a famous actress play a famous actress. But for the rest of us, we get no kick from this particular champagne. Overall, it’s a tedious and monotonous tale of self-centered narcissism in Buenos Aires, and we’ve had quite enough of that already both in Hollywood and Washington.

Be prepared for an emotional tearjerker of a drama here, but the emotions and tears are genuine, understated and honest. Adrian was last home in Ft. Worth, Texas in 1982, and now he’s returned for Christmas, 1985 to tell his family that he’s dying of AIDS. That’s his intention, but he’s constantly thwarted from the truth to his very conservative and religious parents. The film is shot in a granular black-and-white, and some viewers may be put off by that retro-documentary look, but I found it period-appropriate and intensely riveting. Gay, closeted, and HIV+, Adrian (Cory Michael Smith) tries to connect to his mother Eileen (Virginia Madsen) and macho father Dale (Micheal Chiklis) and most heartbreakingly to his younger bother Andrew (Aidan Langford). Adrian has a limited amount of time left and wants to make amends to a jettisoned girlfriend Carly (Jamie Chung) and enfold himself with his parents, and most importantly, explain himself to his younger brother, a boy he feels he abandoned by moving out of the house to New York. When Adrian finally returns home, he sees that younger boy Andrew has become a teenager, and to Adrian’s eyes, also is gay. The torture is now that Adrian will not be there to help Andrew navigate a time and place where the gay was to be prayed away.

What wisdom from his own heartbreak can never be shared with Andrew as his death is imminent, so just another abandonment of his brother. The lesions have begun their march, there are no retroviral drugs in this time, the leper's "unclean, unclean" must be his opening alarm. 1985 —only 33 years ago — a time when you were told, “Don’t tell your mother. You’ll break her heart. Not one word.” But the cassette tape that Adrian leaves for Andrew says quietly, simply, purely, “You will learn to be happy with who you are.” This is a sterling cast, dealing with difficult material, providing a profoundly authentic exploration of who we once were and what we have become. For a certain generation of gay men watching this film today, it surely will be a haunting elegy for those lost and a thankful hymn for those who survived.

But for now, off into the daylight, three films still swirling in a collision of shadows, all those truths demanding their own time in the sun.