As You Like It: Fine acting in a missing forest

This production excels in many ways; but where's the Forest of Arden?

Pritchard Photography
Emily Belvo and Derrick Phillips in Jobsite’s As You Like It.

The Forest of Arden in Shakespeare’s As You Like It is a lyrical place where love conquers all, lions roam, and a bitter old usurper is transformed into a saint because of one brief offstage meeting with a religious man. If it’s not magical in the sense of hosting supernatural creatures — as in A Midsummer Night’s Dream — still, it’s a place of Possibility, contrasted with the closed and contentious Court. In the one place there’s rivalry and megalomania; in the other, romance and “books in the running brooks.” At the Court there’s the vicious Duke Frederick and the murderous Oliver; in the Forest, the good Duke Senior and the earnest Orlando.

I bring up this distinction because I want to point out the only thing that’s missing from Jobsite Theater’s otherwise near-impeccable version of Shakespeare’s great comedy. To put it bluntly: there’s no Forest. I don’t mean that the characters don’t tell us they’re retiring to this area of liberation, or that the many scenes in the Forest don’t take place; I just mean that designer Brian Smallheer only gives us an urban-looking set, featuring Tampa skyscrapers in the background (and the University of Tampa’s minarets), and a plaza-like area in front such as you might traverse on the way to a downtown bank. Yes, there are some natural-looking landscapes projected on two small screens during the Forest segments, but these hardly register as more than minor signals. So all the primordial human responses to a wooded area, to uncultivated nature, are lost, and with it, a certain emotional poetry. Even a few onstage trees would be more evocative.

And that’s a shame, because in just about every other way, this is a wonderful production. The cast, led by the splendid Emily Belvo as Rosalind, speaks Shakespeare so crisply, there’s not a chance you’ll misunderstand, and Brittany Reuther’s contemporary costumes are witty and resonant. Director David M. Jenkins tampers with gender with great success: He turns the two Dukes into Queens, both played potently by Becca McCoy, and he has Touchstone the jester portrayed by the superb Roxanne Fay. Then there’s Rosalind’s love object, Orlando, as presented by Derrick Phillips: This is a truly sympathetic figure, earnest and good-hearted and so in love he can’t think straight. As Rosalind’s friend and cousin Celia, Lauren Field is charming, and as a courtside wrestler and a forestside lover, Michael C. McGreevy is nicely persuasive. Shawn Paonessa handles the melancholy Jaques’ lines with precision, but this outsider figure appears too much on the outside: It’s not clear that he belongs on this stage with these other characters. As for the Tampa setting of the play, it makes no difference: The backdrop could be Atlanta or Seattle without any change in staging. 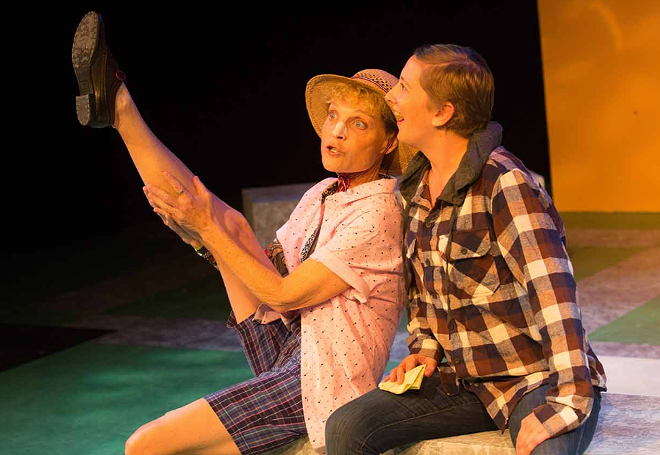 Pritchard Photography
(L-R) Roxanne Fay and Emily Belvo in Jobsite’s As You Like It.

But if there’s one special reason why this As You Like It is memorable, it has to be Belvo’s Rosalind. I’ve been reviewing Belvo’s work for years in this newspaper, but I’ve never before seen her dominate the stage as she does here. Her Rosalind is smitten with Orlando virtually from the first moment, and she’s very funny when, alone with cousin Celia, she shrieks out her excitement. When she decides to escape the evil Frederick by passing for a man in the Forest of Arden (her main change is the loss of a long wig), she has the opportunity to test Orlando, and, not trivially, herself. Particularly mind-boggling are those moments when, having convinced Orlando that she’s a he, she asks him to pretend that he’s a she. Is Orlando falling in love with Rosalind’s male self, or is he so besotted with Rosalind, he’ll hit on anyone with the name, regardless of sexual equipment? No matter what Rosalind is up to, Belvo always plays her as someone who’s sincerely in love and can’t believe her good luck in finding her dreamboat. There may be a schoolgirl’s innocence in her unmitigated confidence, but we never doubt its authenticity.

Still, Arden, where art thou? The urban geometry of Smallheer’s set emanates exactitude, hard edges, just when we want to fall under the spell of the graceful and natural. As You Like It is famously a play about opposites — the good and evil dukes, virtuous Orlando and his mean brother Oliver, the effervescent Touchstone and the depressive Jaques, and... the Court and the Forest. In some plays, even a bare set is fine; this is not one of those plays. It’s a pity that the Jobsite production, so superior in so many ways, has to suffer from this irregularity.