'Benny Loves You,' but he also might kill you if you don’t watch these best new movies available to stream at home

From killer toys to killer sex, this week’s newest releases offer a mixed bag with some hidden gems to discover. 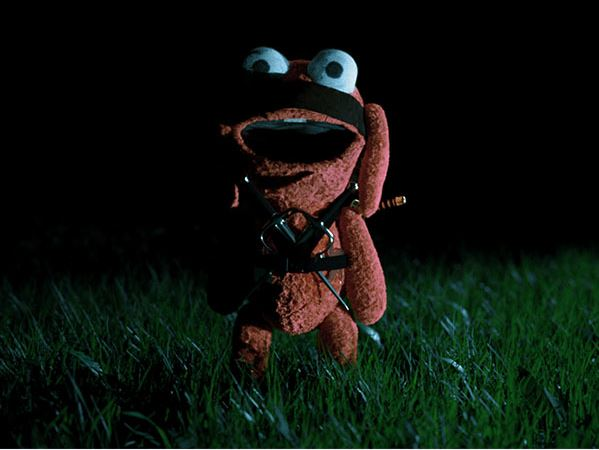 What could be more fun than a tiny, Elmo-esque doll possessed by supernatural abilities running around and slaughtering folks with reckless, random abandon?

In writer-director-star Karl Holt’s feature debut, “Benny Loves You,” Jack (Holt), a concept designer for a children’s toy manufacturer, discovers that his beloved childhood toy does not respond well to being pitched into a tub filled with nostalgia and placed in a dark basement.

Jack’s backstory is deliciously dark. Both of his parents suffer awful, accidental deaths while prepping for his birthday party, which leaves him unable to move past his grief.

When he decides to sell his parent’s home, and he begins clearing the house of belongings, Benny magically animates and immediately starts a campaign to ensure that no one, not a realtor nor the inept local police nor a work colleague who suddenly expresses a romantic interest in Jack, can get between him and his rightful owner.

As far as killer doll flicks go, “Benny Loves You” skirts the line between all-out horror and subversive comedy, but it occasionally strays too far over the line into camp. Jack, for instance, as played by Holt, is a little too wide-eyed and unnecessarily goofy when trying to cover up Benny’s growing list of crime scenes.

But it’s worth navigating those bumpy patches if you’re a fan of murderous Muppets as Holt piles on the gore after Jack responds to pressure from his boss to create the next big fad and pitches a line of horror-themed dolls that resemble Benny.

Christine Ramage/Shudder
At night, Olga wanders through the house with only her trusted rabbit doll to protect her from ghosts in "Caveat"

Another impressive debut arrives with “Caveat,” the latest Shudder streaming platform exclusive, which excels at depicting increasingly unnerving sequences even if writer-director Damian Mc Carthy refuses to provide much in the way of answers.

Mc Carthy’s first feature film is a hallucinatory nightmare that follows an amnesiac, Isaac (Jonathan French), who accepts a curious offer from a man he doesn’t recall being friends with, Barret (Ben Caplan), to spend a week house sitting and babysitting his niece Olga (Leila Sykes), who exists in a perpetual state of paranoia following the death of her father.

Olga has set up residence inside the same house where her father committed suicide, on a remote island accessible only by rowboat, and she spends her days wandering through the home with a creepy stuffed rabbit that seems to have a life of its own.

“Caveat” is a strong debut, even with the myriad of questions that it leaves unanswered, and Mc Carthy is definitely a director to keep fixed on your radar. Saban Films/Paramount Pictures
Freddie Highmore, left, stars as a genius engineer recruited to help break into an impenetrable safe in "The Vault"

I’ll be the first to admit that when I initially requested a review copy of “The Vault,” I fully believed, based on the DVD cover art, that director Jaume Balagueró (“[Rec]” and “Sleep Tight”) was returning to his roots with a zombie heist thriller.

Imagine my surprise to discover that the throng of bodies depicted at the bottom of the box art surrounding a fortified Bank of Spain was not a zombie horde, as I had hoped, but thousands of fans flooding the street to celebrate the Football World Cup.

Despite my mistake, I am happy to report that “The Vault” is a nifty cracker-jack thriller built around an impenetrable Fort Knox-like safe that immediately submerges if breached by would-be thieves and focused on a reluctant engineering genius named Thom (Freddie Highmore), who is recruited by a famed treasure hunter to help him reclaim a cache of untold riches that he discovered in an ancient shipwreck off Madrid.

If only it was as good as its double-entendre title promoted.

My main problem with “Road Head,” which actually does a wonderful job presenting Alex and Bryan’s relationship, as well as Stephanie’s inability to move past an abusive ex-boyfriend, is that neither Del Rio nor Xavier know what they want their audience to feel after watching the movie.

This is a movie that asks you to invest in fully-formed characters, to care about their plight and their fight to survive, with no discernible reward for doing so. If anything, Del Rio and Xavier callously and cruelly subject viewers to an unwinnable contest that ultimately leaves you feeling empty inside.

Gorehounds likely will champion “Road Head” for its unwavering attention to bloody, visceral carnage, but I found myself almost angry and embittered once the credits rolled.

Cleopatra Entertainment
I'm not sure why this is the official publicity art for "Baphomet," but let's all pretend the bleeding goat-demon mask is scary.

If ever there was a movie that seemed custom-made for cult status, it’s “Baphomet,” which makes the fact that writer-director-star Matthan Harris misses the bullseye by such a wide margin all the more difficult to fathom.

Harris plays Mark, husband to Rebecca (Rebecca Weaver), who is pregnant with their first child. Rebecca seems to be staying with her parents while Mark works as a veterinarian and surfs during his downtime. Oh, and there’s a Satanic cult that seems hellbent on claiming Rebecca’s soul for no discernible reason other than they’re evil and practice powerful dark magic.

“Baphomet” is the kind of movie where Mark gets partially eaten by a shark, which is summoned by a cult member pouring a small vial of blood into the ocean, only to be resurrected by a “witch priestess” at Rebecca’s urging and with her father’s permission, only to have recurring nightmares about the shark attack before turning into an unstoppable warrior.

“Baphomet” is the kind of movie where a sheriff tells his deputy to call for backup, as they are surrounded by cult members, and instead of using a walkie-talkie or a radio affixed to his uniform, the deputy immediately grabs a cell phone and shouts, “Sir, I can’t get a signal!”

“Baphomet” is the kind of movie where Rebecca, without a trace of menace or irony, tells Mark that even if he is vanquished by the cult, she will just resurrect him again. “I’m never going to let you die, so you better just suck it up,” she says.

“Baphomet” is the kind of movie that prominently promotes the involvement of Dani Filth, lead singer of horrorcore metal band Cradle of Filth, only to have him appear via webcam for less than two minutes total as an expert on the occult.

“Baphomet” is the kind of movie that ends with one of the most awful, truly ridiculous jump scares that I have ever seen.

Face of the Devil (Streaming and DVD): This bizarre import from Peru about a group of friends who go on a jungle hike only to run into an evil spirit was completed in 2014, and apparently shelved until now. Watching it, it’s not difficult to understand why.

Open Your Eyes (Streaming, Blu-Ray and DVD): A writer finds himself spiraling after meeting an alluring neighbor who lives in his building.

The Carnivores (Streaming): The latest from Dark Sky Films is a psychological thriller focused on a family pooch and a crushing need for fresh meat.

Terror Eyes (Streaming): It’s a play on terrorize, get it? This latest attempt to mine social media influencers tries gamely to find its focus, but conflicting narratives and a lackluster finale leave you wanting much more.

Blurred Vision (Streaming): This Danish thriller takes a stab, excuse the pun, at using an unexpected pregnancy to fuel a descent into madness.

Blackstock Boneyard (Streaming): It’s official, the “Get Out” / “Antebellum” bandwagon is chugging along with a racially-charged urban legend about avenging Black ghosts exacting revenge on a group of elite white folks.

The Amusement Park (Shudder): The late, great George A. Romero will forever be known for his undead visions, but Shudder has nabbed exclusive rights to this long lost early film by Romero about an elderly man facing a hellish nightmare at a theme park.