The Pagidipati family purchased Big John at auction in 2021 for a record $7.7 million. 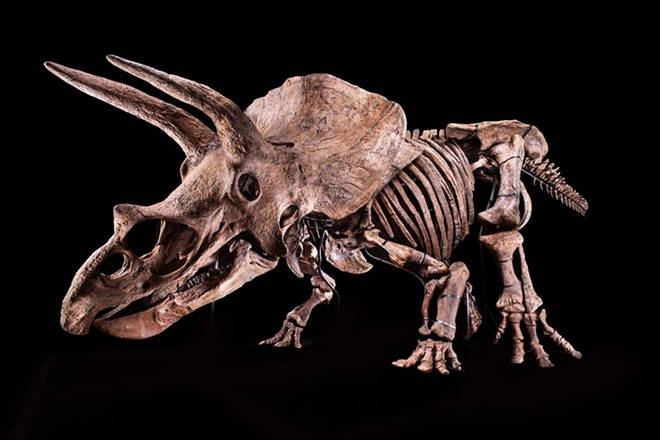 At nearly 26-feet long and 10-feet high, Big John is the centerpiece of Glazer's brand new exhibit, which will take viewers into the Late Cretaceous period.

According to a press release, the exhibit will include tunnels with clear domes, where curious viewers can pop up and see the 66-million year old skeleton from underneath.

Roughly the size of an RV, the fossil is 60% complete, and is estimated to be 5-10% larger than any other known triceratops.
click to enlarge


According to National Geographic, the specimen was discovered unintentionally in 2014, when commercial paleontologist Walter Stein discovered it on a ranch in Perkins County, South Dakota.

Named after the ranch where it was discovered, Big John was later sold to an Italian firm, which prepared it for auction in 2020.

Tampa's Pagidipati family purchased Big John at auction in 2021 for a record $7.7 million, the second largest sale ever for a set of dinosaur fossils. 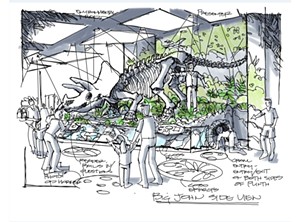 The sale was controversial at the time, and added fuel to an ongoing debate about the ethics surrounding private auctions which drive up sales of scientifically valuable fossils and often prevent scientists from further studying the specimens.

But, as it turns out, the  Pagidipati family did not plan to keep Big John behind closed doors.

“Our interest in purchasing Big John and other specimens is first and foremost to make them available to the public and for research,” said Sidd Pagidipati in a statement. “We want to do our part to help the Tampa Bay area become the best place in our country for families to live and raise their children.”
click to enlarge 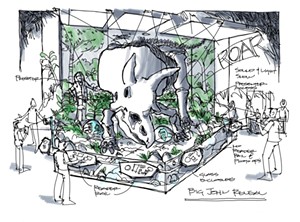 
Big John made headlines last year, when a study published in Nature suggested that the gigantic triceratops was likely involved in a violent encounter before its death.

The study states that a rival triceratops may explain why Big John has a keyhole-shaped opening on its frill.

Signs of healing on the skull also suggest that he did not immediately die from this injury but perhaps from infection months later.

"The location, shape and size of the lesion suggest that it was caused by the horn of another Triceratops of similar size," said lead researcher Ruggero D'Anastasio, a professor of biological anthropology at G. d'Annunzio University of Chieti-Pescara in Italy to LiveScience.

"The impact probably came from behind, as suggested by the location of the lesion itself and the shape of the 'exit hole,' which resembles the bullet holes described in forensic cases."

Big John’s new exhibit opens Memorial Day weekend, and is included with general admission to the Glazer Children’s Museum, however tickets must be reserved in advance.