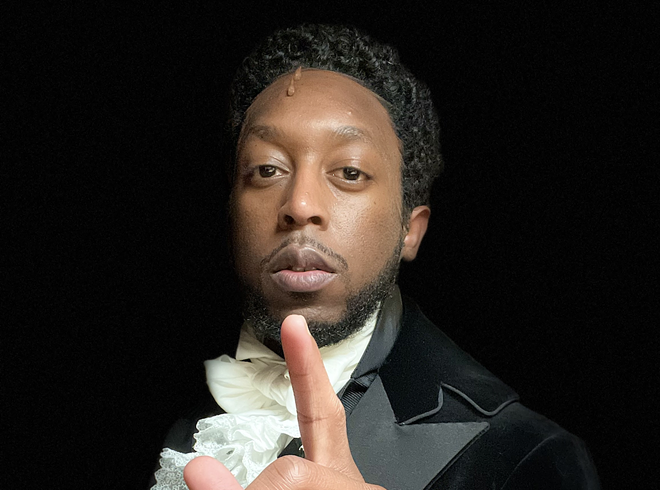 Courtesy of Hamilton via Straz Center
Deejay Young is a Blake High School graduate and swing for several roles in the 'Hamilton' national tour.
"Hamilton” returns to Tampa this week, and it’s booked a month-long stay, which gives local theater fans plenty of chances to see one of their own take the stage.

Deejay Young is a Blake High School graduate and swing for several roles in the production’s national tour (including Alexander Hamilton, Aaron Burr and Marquis de Lafayette/Thomas Jefferson). In June, he even stepped into the role of Hamilton himself.

Tickets to see "Hamilton" at Tampa's David A. Straz Center for the Performing Arts from Dec. 28-Jan. 22 are on sale now and start at $49. Young, 32, found his voice singing in his mom’s church, and joined his first national touring production at just five years old. He told Broadway World that he fell in love with theater after seeing “Chicago,” but also composes poetry and music of his own. Depression as a result of being away from his craft led to him dropping out of Florida A&M University, but the gamble paid off.

He joined City Groove, a Tampa group signed to Universal Records, then moved to Orlando where he joined a Disney show cast, which opened the door to playing in places like Radio City Music Hall, plus with artists like Yolanda Adams.

“It is very mind-boggling. I once said I would never be a swing because I thought I never could. It’s funny how the mind works. Our minds are so powerful. It’s just how you approach things,” he told BW.

“I just want Tampa to be proud. I’ve worked very hard for a very long time. I have my own music. I’ve done so many things within this Tampa community. I want people to see me in this show and just be proud that I am putting Tampa out there in a positive way and that I didn’t give up on my dreams.”

If you catch Young out and about, maybe he’ll play you some of the new album he has coming out next year.

Read his 2016 intro letter and disclosures from 2022 and 2021. Ray Roa started freelancing for Creative Loafing Tampa in January 2011 and was hired as music editor in August 2016. He became Editor-In-Chief in August 2019. Past work can be seen at Suburban Apologist, Tampa Bay Times, Consequence of Sound and The...
Scroll to read more Events & Film articles