The wildly popular adult entertainer and filmmaker Julian Shaw explore what it means for a man to be ruined by a woman he can never touch. 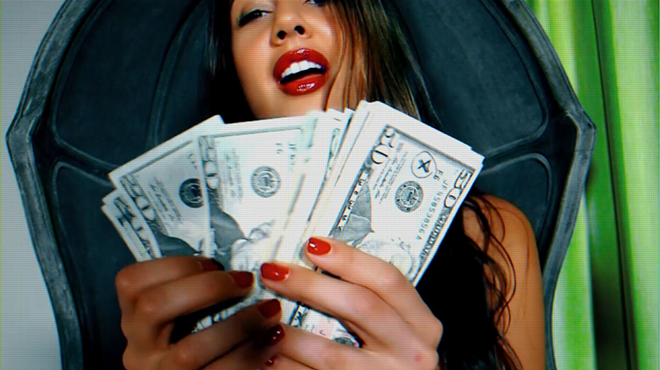 If Helen of Troy’s face launched 1,000 ships, it’s fair to say that Lynch’s demure, good girl next door with the devious smirk has coerced 10 times as many men to open their wallets and pay her a fortune online. And now, with the release of “Use Me,” her first mainstream feature film, which she co-produced, Lynch is poised to transition from fetish star to professional actress, and possibly become a household name.

The Portland, Oregon-based Lynch plays a modified version of herself in “Use Me,” which was written and directed by Julian Shaw, who also stars in the movie as a documentary filmmaker straddling the line between cinema verité and artistic cruelty.

Shaw’s “thing” in the film is that he likes to leave his camera rolling even during the most difficult moments of life, and as he admits at one point, he might even goose the drama a bit just to get a better, more raw reaction. But he meets his match in Lynch, who quickly transfixes him with her personality and her freeing approach to sexuality, which creates a dramatic tension that escalates into almost a traditional Hollywood thriller during the third act.

In real life, Shaw first approached Lynch around 2012 with the idea of using her a documentary subject, but that evolved over time to become the hard-to-categorize “Use Me,” which incorporates found-footage, cinema verité and conventional filmmaking.

“Our goal was to blur those lines of fantasy and reality and make people wonder what parts are real, and what parts aren’t,” said Lynch, who has a bachelor’s degree in psychology. “It’s really cool to see people try to figure it out because no one seems to get it right.”

Much of “Use Me” seems to be very real. Lynch’s father appears in the film. She discusses being raised Jehovah’s Witness. And she talks about how she cultivated her online fetish brand so that she never appears naked on camera. And then, with Shaw, she breaks that rule.

“Me and Julian talked a lot about that scene,” she said. “I was hesitant about it at first because, yeah, I don’t appear nude, but to be honest, after a while, I just really didn’t give a fuck.”

Much of “Use Me” focuses on Lynch’s unique ability to destroy, or financially ruin, male clients. The film explores the relationship she has with these men, none of whom she ever meets outside of the internet, and how much they are willing to pay her to be demeaned, demoralized or forced into servitude.

One such example in “Use Me,” a pivotal moment, is when a client seems to revel in how greedy she can seem, and when he tells Lynch to pay herself $100, she instead charges $1,000 to his credit card, which is something she said would never actually happen.

“Use Me” is a fascinating experiment and a surprisingly thought-provoking work of art that manages to explore a subversive world that most people never experience even as it consistently morphs from documentary to pseudo-love story to techno-thriller and beyond.

Above all, Lynch comes across as a seasoned professional, not surprising given her years in front of computer cameras, but she exudes a confidence and a natural energy that’s as intoxicating as her more provocative fetish clips.

“Use Me” even plays with her carefully cultivated persona, presenting her as a villain throughout, which is something that Lynch doesn’t mind one bit.