It's a Best of the Bay-winning local comedy tradition. 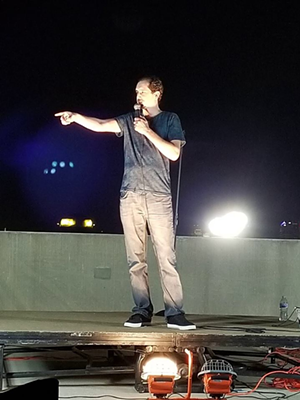 There's a great comedy show happening on Thursday night, and it's free. But it's not happening in a club or a theater. It's not technically inside a building at all. It's more like on a building, really.

The 7th Annual Rooftop Show was fun enough to win a Best of the Bay award in the past, and Cigar City Comedy is ramping up the entertainment in 2019. In addition to being a showcase for professional comedians, including John J. Murray, Jaquavious Curry and headliner Danny Bevins, the show at Visconti Luxury Apartments will include music from Stick Martin and free beer samples from Dunedin Brewery. You're encouraged to BYOB, as well as lawn chairs, blankets and an interest in adult-oriented comedy. Did we mention the whole thing is free?

All you really need to do is park your car in the garage, and go up until you find the roof, the crowd and the stage. Then kick back and enjoy some music and laughter. We won't say it's the most fun you could possibly have in a parking garage, but it's up there.

Stay up to date with Tampa Bay culture, comedy, arts, music and more — subscribe to our newsletters.