Comedian Alonzo Bodden on his upcoming Tampa set: 'One thing's for sure, Florida won’t cancel shows'

'One thing's for sure, Florida won’t cancel shows. I don’t think they've cancelled anything.' 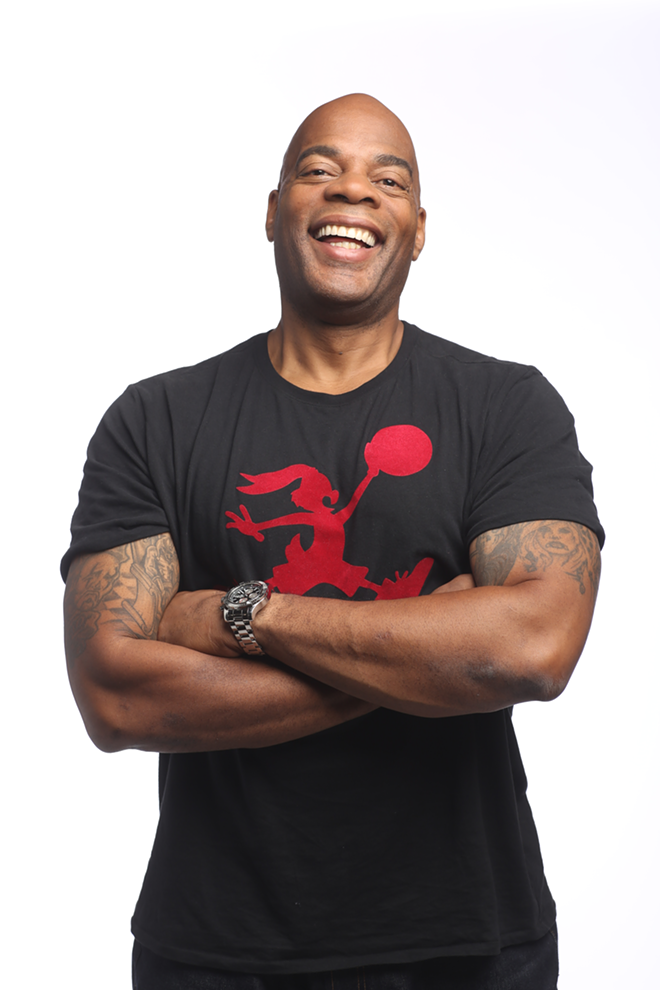 Alonzo Bodden hasn't been on stage much recently, but he hasn't been sitting around doing nothing, either.

The longtime comedy vet hasn't let COVID-19 destroy his creativity. He's been active on virtual shows, he's always posting something interesting on Twitter, and he's releasing regular episodes of his "Who's Paying Attention?" podcast. Still, it's not the same as headlining stand-up comedy shows, and Bodden will finally get back to the grind at Side Splitters starting Thursday, Aug. 13 (he's got five shows in between then and August 16).

We asked Bodden about returning to stand-up, motorcycles, the NBA and cancel culture. That's a diverse list, but he's a versatile guy, with plenty of voice and acting work and interesting hobbies on his resume. He has plenty to say about a lot of topics.

How long has it been since you've done a headlining weekend? What are your thoughts about finally getting back on stage?

I haven’t done a regular show since The Laugh Factory on March 14. I did a 10-minute guest spot July 3 in La Jolla. I can’t wait to get back onstage and work this rust off.

You tried to stay active the past few months, performing in a number of virtual comedy events. What's your take on those experiences? What did you think was positive, and what was lacking?

The virtual shows and Zoom shows are all we’ve got. They're fun, but nothing like a real live crowd. It’s the difference between driving on a video game vs. driving an actual car. "Gran Turismo" is fun, but it doesn't match driving a Porsche at Laguna Seca, or even driving a Camry on the 405 Freeway.

You're a nationally-touring headliner, and Florida is, unfortunately, a hotspot for COVID-19 right now. What made you choose here and now to get back on stage, and do you have any concerns headed into the weekend?

Well, a month ago I’d have said Florida is crazy. But since California has caught up, I can’t really complain. Yes, I do believe Florida overall has fewer protections and maybe more conspiracy theorists or people not taking it seriously, but my safety is up to me.

I think the club is doing well with social distancing and I can control how close I get to anyone. Now, you probably won’t see me on the beach or shaking hands after the shows but that’s not just Florida, that’s anywhere.

The great thing about Florida is I can make Florida jokes without even mentioning COVID-19. One thing's for sure, Florida won’t cancel shows. I don’t think they've cancelled anything.

Returning to the stage, you probably don't want to ignore talking about the virus, but you also want to give people an escape from what they've been focusing on. How do you determine how much you'll touch on the subject, and how will you approach doing that material?

I’ll have to feel it out when I get there. Obviously, it can’t be ignored but there are other things going on. There are also some unexpected things as a result of the shutdown, quarantines, home schooling, etc. There’s plenty of funny out here.

You're known to be an avid motorcycle enthusiast. If you could keep only one from your collection, what would it be and why? And what's a good starter bike for someone just getting into riding?

If I only had one bike the rest of my life it would be the BMW GS Adventure. It’s what we call an adventure bike. Made to travel and go on and off road. Sort of like a two-wheel SUV.

As for starter bikes, there are so many great ones out there now. Small bikes are hot, so everyone is making good ones from the Honda Monkey to the sporty KTM 390, The Yamaha and Kawasaki 300cc bikes, to the Ducati Scrambler. Any have enough power to be a real motorcycle but are easy to ride and great to learn on.

You've done a lot of different projects since your successful turns on "Last Comic Standing." What keeps bringing you back to the stage? What does stand-up give you that acting, radio and voice-over work can’t?

Wow. That’s like asking why do you love your wife. I’m only guessing that’s what it’s like as I’ve never been married, other than to stand up. I’d have to say it’s the creativity. Stand up is live and in the moment.

Stand up lets me talk about anything I want: My life, current events, society’s ills. It’s the comic's job to cover it all. I can go onstage and talk about racism and yoga pants and make them both funny. That’s the creativity, to make it funny and not preach. If I can make you laugh a lot and think a little, that’s a pretty good day.

Anyone who's seen your Twitter feed knows you're very supportive of social justice causes, but you're no fan of cancel culture. How do you navigate being a comedian in 2020, where your job description is to say things that might shock, offend and make people think?

I don't see being a comic in 2020 as different from 2019 or 2009, etc. The comic's job has always been to speak truth to power. I don't think you can hold a comic to the fire for something he or she said 10 to 20 years ago. Society changes, as does humor and society’s norms.

I’m not a fan of cancelling at all. I think it's OK to ignore someone who just goes for the outrageous to gain clicks, like Kanye, but I don't think he should be officially canceled. Just ignore him.

As for cancelling comics, if you don’t think the comic is funny, don't listen. Comics and politicians should be held to different standards, although with our politicians it’s often difficult to tell who’s doing comedy.

As a basketball fan, how do you feel about the recent NBA contests you've seen so far (putting aside the Lakers defeating your Clippers in a close game)? The "bubble" (keeping players isolated in one place) seems to be working, but how do you feel about watching games with no fans? Is this something you could get used to seeing with other sports on television?

I think the NBA is trying, but I’d much rather they got the players in the bubble and just had pick up games. In normal summers, NBA players meet up in various cities and play pick up ball and the games are legendary. Let us see that. Even if the Clippers win, I’d say this season’s “Championship” has to have an asterisk.

These bubble games are better on TV than I expected, and there’s no home team calls by the refs. Not sure if that’s good or bad. I’ll be glad when fans are back. By the way, what are they doing with my ticket money? I haven't seen a refund.

Your most recent comedy special, last year's "Heavy Lightweight," available on Amazon Prime, has both "heavy" and "light" comedy material. Will the shows this weekend lean toward the heavy side or the light side, or does it depend on your mood, the crowd or something else?

I’m hoping the shows this weekend lean toward funny. As for the heavy vs. light balance, I never know. One person’s light is another person’s heavy. I just hope Carole Baskin isn't too close to the club, because I will mention "Tiger King" and I’d rather not be fed to a tiger.