From the Fairgrounds to Raymond James.


Creative Loafing Tampa Bay's arts & entertainment section includes sports because, well, we're not a daily with a sports section, and sports are entertaining. So it's no surprise that Tampa Bay's hopefully-dynastic football team dominated CL's A&E web traffic this year, but the Brady effect had some company in 2021.

In the offseason, CL Bucs columnist Carter Brantley wondered out loud about the five guys Tampa Bay might cut before the 2021-22 campaign; readers parked at the post and told their friends, but it wasn't all they were interested in. Brady fans and haters were all about the yacht he bought a day before fans discovered that his TB12 company got a $960,855 PPP loan (you didn't expect the guy with more than $260 million in career earnings to not buy the boat did you?). Sports fans also rightfully drooled over the Super Bowl and were big hurt when Brantley suggested that the Bucs shouldn't stop at disgraced former head coach Jon Gruden when it came to Ring of Honor removals.

In July, comedian Bill Burr went on his podcast to say that he wanted Tampa Bay to win the Stanley Cup again, because we "absolutely need it," adding that Montreal fans look like they're doing OK personally. "You go to Tampa. Oh, Jesus Christ. I mean, it's just, I don't know what it is down there. It's just a city that time forgot, right? Everybody's down there like, you walk around Tampa and it's like, is everybody on their way to a cookout?," Burr added. And because he wants to see Tampa himself, the comedian booked a show here, set for May 22, 2022.

Star Tampa Bay Lightning forward had a different opinion on Montreal fans though, and he didn't hold back in a shirtless, postgame interview following the Bolts win to win the Stanley Cup for the second time in a row. In between chugs of Bud Light, Kuch really hit his stride when he touched on the Canadiens' one series loss up North. "The fans in Montreal, come on," said Kucherov. "They acted like they won the Stanley Cup, last game. You kidding me? You kidding me? They're final was last series, OK."

Dave Bautista is opening a tattoo shop in Tampa

The WWE star and actor's most notable appearances in this issue are in the news roundup (turns out, he doesn't like MAGA either), but he made news by announcing the opening of DC Society Ink in partnership with his own tattoo artist, John Kural of 2 Extreme Tattoos. An exact location was not unveiled, however Bautista says it's close to The University of Tampa.

"Selling Tampa" is the no. 1 U.S. show on Netflix, and a lot of the success has to do with Allure Realty chief Sharelle Rosado who spoke to CL in September. "Viewers are going to see powerful minority women stepping into luxury real estate. This shows anyone as long as you work hard and no matter what, you can do it," said Rosado. Fans are expecting the season to be renewed, so news on a release date for the second outing should arrive soon.

It's a bit sad, but everyone's already forgotten that for a little while, thanks to Canada's much more restrictive COVID-19 policies, Tampa had its own NBA franchise. Sold by Wade + Williamson and designed by Luc Samanski, the "Tampa Raptors" jersey is something of a collectible and a true hallmark for a new generation of downtown-dwelling Tampeños.

Chad Johnson lost $2,000 in a pick-up soccer game in Tampa

It probably didn't help that Johnson's pregame meal consisted of two bread rolls and a Coke, but in February at East Tampa's Cinco Soccer the footy fan lost $1,000 in a game of five-a-side and then even more after going double or nothing. Ochonaldo he's not, but a fun guy nonetheless.

A June opening morphed into a September one, but that didn't matter for Bay area art lovers who flocked to the website as news of Fairgrounds' opening intensified. You also converged on a photo gallery of 2606 Fairfield Ave S where women and people of color make up half of the 60-artist roster that's transformed 15,000-square-feet of warehouse space into a weird, wacky and whimsical tribute to Florida. 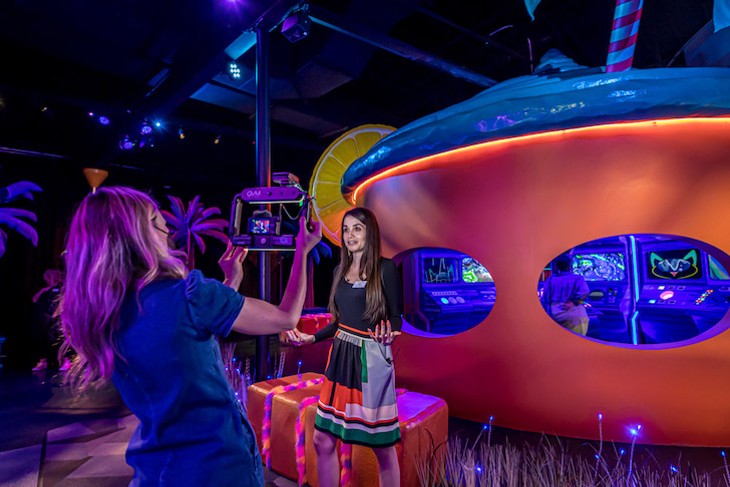 Click to View 95 slides
Support local journalism by subscribing to our newsletter and following @cl_tampabay on Twitter.