Creature feature: Ti-Jean and His Brothers 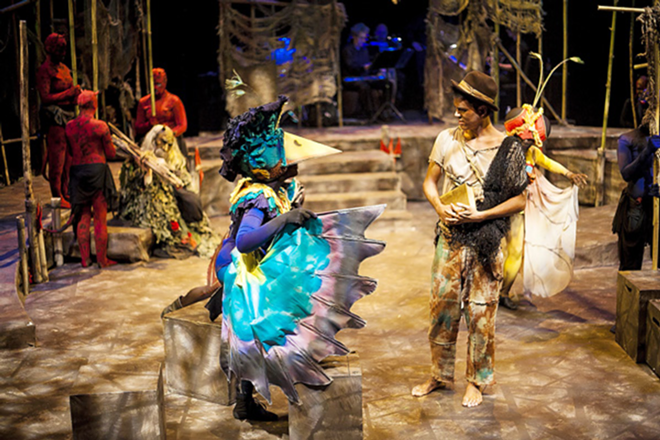 Candace Kaw
PUT A BIRD IN IT: Naomy Ambroise as Bird and Paul Pullen as Mi-Jean in USF’S Ti-Jean and His Brothers.

Ti-Jean and His Brothers takes place in the collective unconscious of its spectators, a land where life is a quest in a haunted forest, animals speak to humans and each other, and the Devil gambles for the souls of the self-satisfied. In the beautiful production at TheatreUSF, Derek Walcott’s vision of elemental things comes across so vividly, we’re reminded that at the core of our complex modern world are the perennial, oldest questions: how to live, whom to trust, and what to value. On Henry Muttoo’s splendid set — a semi-circular walkway edged by bamboo poles — and with the help of Yao Chen’s spectacular costumes — the Frog, Cricket, and Firefly are gorgeous — Ti-Jean reminds us that evil wears many disguises and that the only effective response to Old Nick is stubborn disobedience. There’s music here, too, the lovely sounds of the islands (for which we can thank Robert Macar) and ingratiating choreography by Katurah Robinson. Add a stage full of supernumerary red and blue demons (more bodies than most professional theaters can afford to employ), and the result is near-magical — or perhaps I should say, mythical. As in “communicating a truth deeper than fact.”

Nobel-winner Walcott bases his tale on a West Indian fable about three brothers — Gros-Jean, Mi-Jean, and the title character — who are just coming of age and venturing out into the wide world. As their mother worries over and blesses them, we’re made aware that the Devil has set forth a challenge: if they can make him angry, he’ll reward them with riches, but if he enrages them first, he’ll eat them for dinner. The first to try his luck is Gros-Jean, brawny and proud of it. The Devil, in the form of an arrogant white Planter, assigns him one impossibly trivial task after the next until the strong man loses his temper: Devil 1, Brothers 0. Next comes Mi-Jean the intellectual, who’s certain that his book-learning and sophistication will protect him from error: the result is not such as to encourage the overly cerebral. But then finally comes Ti-Jean, who knows confidently that both God and Devil exist, and whose campaign against the latter is ingenious and proactive. As these contests transpire, we’re treated to the commentary of Frog, Cricket, and other animals, and we’re invited to consider why the Father of Lies sometimes takes the shape of the Planter and sometimes the look of a seemingly harmless Old Man. (There’s also a strange creature called Bolom, who, neither living or dead, needs the demise of all three sons in order that it might gain human feeling.) The final outcome of the last conflict is never really in doubt — these myths tell us how to prevail, not how to fail — but the way there is punctuated with fine song and dance, and the spectacle of all these strange personages on stage together is wonderfully affecting. If only our pro theaters had a university budget!

Among the score or so of actors, a few stand out. Tiffany Schultz as the Mother is a lovely, melancholy presence, protective of her sons but also conscious that her power to keep them from harm is next to negligible. Adam Seacord as Gros-Jean is happy in his skin, proud of his strength, and blithe to the point of folly: his peril grows precisely out of his feeling that he’s in no peril. As Mi-Jean, Paul Pullen is jaunty and charismatic, as much entertainer as intellect, and as the Devil/Papa Bois/Planter, Diego Hernandez-Calabria is Vicious/Sinister/Supercilious. The weirdest of the evil characters is Angel Guppy as Bolom, who doesn’t resemble any earthly or unearthly being I can think of, and who seems to emerge most directly from the realm of nightmare. But Ricardo Soltero-Brown is a delightful oversize Frog, and Carlos Garcia as Cricket and Katurah Robinson as Firefly are also endearing.

I have to point out, though, that sometimes these characters’ masks muffle their speaking voices: Frog’s lines, for example, are at times difficult to make out. Henry Muttoo’s direction gives equal importance to songs and dialogue: this production has the unity that only a strong overarching imagination can organize. Fanni Green is to be praised for coaching the actors on their island accents.

It’s not often that the modern theater plays, even for a few moments, on our most primordial hopes and fears. Ti-Jean is an exception — the sort of theater that a Carl Jung or a Joseph Campbell would appreciate. In a world of mostly realism, it’s a welcome departure. This is a striking, memorable play — something to think and to dream on.