A Center That Holds eavesdrops on prison letters from the late humanitarian and Czech president. 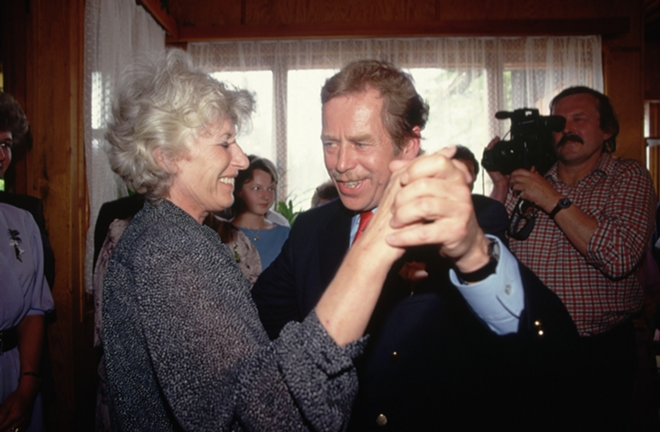 Profimedia.cz
TO HAVEL AND HAVEL NOT: The romance between Havel and wife Olga Havlová endured several years of separation.

Become intimately acquainted with one of the 20th century’s greatest thinkers and world leaders this weekend, when The University of Tampa presents a staged reading of A Center that Holds, a play inspired by the prison letters of Václav Havel.

The drama re-imagines interactions between Havel and wife Olga Havlová, drawn from prison correspondences from 1979 to ’83 — a pivotal period that led to the Soviet Bloc’s demise in Eastern Europe, followed by Havel emerging from oppression to become the last president of Czechoslovakia and first president of the Czech Republic.

Havel's legacy is being revisited by UT professor emeritus and playwright Francis Gillen, who brings to life the Havels’ determined devotion.

"I had taught several classes on Havel in the '80s," Gillen said, "and I have been fascinated by his letters to his wife. They fill 400 pages in the excellent translation by Paul Wilson, and are often very abstract since he was not allowed to write on politics. So when the request for projects on Havel came along, I was fascinated by the challenge of trying to adapt them for the stage. In doing so I had to re-create Olga's letters, for they had been seized by the state police, and only four of them still exist and those four can only be accessed in the archive in Prague."

Gillen's play also includes a fictionalized parallel love story between two Soviet censors, whose parallel love story serves as a foil of sorts. "I also created the characters of two censors who read and comment on Havel's letters," shared Gillen. "Jiri's voice is the cynical response to Havel's idealism, and Kamila's is that of someone who would be an idealist but cannot be, or chooses not to be, within the socialist/communist late totalitarian system."

The cast includes Ned Averill-Snell, Rosemary Orlando, Aileen Suseck and director Bob Gonzalez, and the play is part of the Mutual Inspirations Festival sponsored by the Embassy of the Czech Republic, presented with Havel’s Temptation, a newer take on the Faust legend.

"Bob Gonzalez put together a terrific cast," Gillen effused, "and I learned a few things from the August production, and have made a few changes, but the same cast will return for this production."

The staged reading of A Center That Holds can be seen at 8 p.m., Fri.-Sat., Oct. 18-19, at the Reeves Theater on the second floor of the Vaughn Center, the University of Tampa campus, 401 W. Kennedy Blvd., Tampa. Photo courtesy of Profimedia.cz.