They put a ghost in the machine.

The slab of human-sized screen encased in metal standing out in front of the entrance to St. Petersburg's Dalí Museum looks like a portal to another world, or maybe a sci-fi version of the Mirror of Erised from Harry Potter & The Philosopher's Stone. Far back in its depths, a figure paces back and forth, in and out of a dim shaft of light.

Someone steps forward and presses the button next to the screen. A rich tone sounds — more a "bong" than a chime — summoning the figure, which moves forward until it reveals itself in life size.

It's Salvador Dalí himself, back from the dead to welcome you to one of the 'Burg's most popular attractions with locals and tourists alike.

The screen out front is one of three that comprise the museum's newest attraction, "Dalí Lives," which uses artificial intelligence (or AI, or machine learning) to resurrect the Spanish master of surrealism for patrons to interact with. The image on the screen looks and sounds convincingly like the artist, who died in 1989. Even the words spoken by the likeness sound like him — because, by and large, Dalí actually said them at one time or another.

"Dalí Lives" is the result of a collaboration between the museum and Goodby Silverstein & Partners, the San Francisco agency also responsible for the museum's beloved and critically raved virtual reality exhibit Dreams of Dalí, which debuted in 2016.

(And also, like, a third of the ads you've seen during every Super Bowl.)

The agency sorted through untold hours of archival footage, along with hundreds of letters, quotes and interviews to come up with content for the project. It then employed more than 6,000 frames of video and 1,000 hours of machine learning — wherein the computer "learns" from the information it's provided to expand upon it — to create a realistic "new" face and movements for the artist's image, which were superimposed over a living actor. 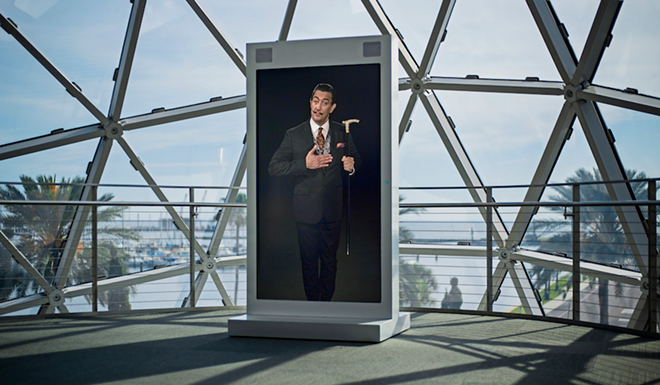 Courtesy of The Dali Museum

The result is 45 minutes of new video, and thousands of combinations of statements from the reincarnated Dalí as he interacts with visitors to the museum via the three screens spread throughout the complex.

The aforementioned first screen welcomes visitors to the museum, and will even utilize current information via the internet to comment on the weather. The second, on the museum's third floor, delves more into Dalí's philosophy and artistic process while displaying even more of the artist's famous, er, personality (read: ego). It's the third, however, that best displays this technology's perhaps somewhat unsettling potential, and is also the one that's really gonna thrill visitors: Stationed in the gift shop near the museum's exit, it gives us a Dalí that thanks us for coming, and then offers to take a selfie with us. As we stand in front of the screen, this Dalí not only wields a smartphone, but snaps a pic, marvels over its quality and then rotates the phone to show us the results while the screen flashes a short, easy-to-remember code we can text to the number on the base of the screen's casing to receive our own file of the image.

Gimmicky? Maybe. It's also fascinating — to see and hear what a true icon of the visual arts looked and sounded like, and to experience what contemporary technology can do in a more sophisticated and educational context than that of, say, an Avengers movie or first-person shooter video game.

Or a Super Bowl commercial, for that matter.

"Dalí Lives" debuts this Saturday, May 11, on what would've been Salvador Dalí's 115th birthday.