Unlike other countries, personal responsibility isn’t baked into the American mindset.

Last week, Tampa Mayor Jane Castor issued an executive order calling for masks to be worn outdoors in the city’s entertainment districts. Save for some street preachers, a few drunken revelers on outdoor patios and folks in pirate cosplay, folks in Ybor City last Saturday night from 8 p.m. to midnight seemed to comply.

The new executive order runs through Feb. 13 and supplements existing city and county ordinances which strictly prohibit not wearing masks while standing (ie: on dance floors). Under existing orders, the only time face masks may not be worn is when seated to eat or drink.

RELATED
With the Super Bowl on the horizon, here’s how Tampa handled its first weekend of mandatory masks

While violators will face a civil infraction, which carries up to a $500 fine, Castor’s announcement did not specify how the executive order will be enforced. And while the arrival of the order signals the city’s desire to host a Super Bowl safely, the mayor has said that the city is more focused on education when it comes to seeing the mask mandates enforced. “We’re not looking at this from an enforcement viewpoint, but from an encouragement viewpoint,” Castor said at a Jan. 25 press conference that left some locals scratching their heads and asking for stricter reinforcement and rhetoric.

When contacted last week about whether or not code enforcement would be out at local bars hosting Super Bowl watch parties, a spokesperson for the city reiterated the city’s focus on "education" over enforcement. And in new comments to the Tampa Bay Times, Tampa Police Chief Brian Dugan also defaulted to the city’s desire to educate before enforcing the mandate, adding that giving “a citation will be a last resort.”

“We’re just going to hope for the best and hope people comply,” Dugan added. But hope is a tricky thing.

At last week’s press conference, Dr. Jay Wolfson, senior associate dean of the Morsani College of Medicine at the University of South Florida, pointed to Disney World as an example of a place where relying on encouragement over enforcement was working, but he noted that folks who go to theme parks are already invested since they’ve bought a ticket to get in and agreed to certain terms and conditions, including the wearing of face masks. Plus, Wolfson, added, theme parks have employees ready to break up large groups and enforce the park’s mask rules.

But orders like the ones in place in Tampa for the Super Bowl rely on personal responsibility, respect for self and others, and common sense.

In an email to Creative Loafing Tampa Bay, Wolfson pointed out that a place like Florida—and a country like the U.S.—just doesn’t have the same cultural foundation as places like Japan or Thailand where personal responsibility is more embedded in the culture. Wolfson added that in those countries and others, when there’ve been slips, unambiguous controls have been imposed. In Europe, there are cities where fines of up to 300 Euros are issued for violating curfews and mask ordinances.

In his own email to CL, Dr. Edwin Michael at the Center for Global Health Infectious Disease Research at University of South Florida agreed that there are other places in the world with greater social cohesion and governments acting foremost to protect the public. He says those places—including Taiwan, South Korea, Singapore, Vietnam, New Zealand, Australia, the United Arab Emirates, Bahrain and Israel—have done well in managing the pandemic.

But “ ...even those are being challenged and sometimes ignored in bastions of ‘common sense’ such as Berlin,” Wolfson said, adding that the Tampa Bay area must face the reality that tens of thousands of people from across the state, U.S. and world are converging here.

“We can not hope that away; we won’t police the bad behaviors as the French and Greeks have done,” Wolfson wrote, “we can only try to rely upon limited, local law enforcement resources, the responsible actions of proprietors of restaurants, bars and other venues, and the presumption that some common sense will prevail.”

Wolfson points out that admonishing and pointing fingers at non-believers and non-compliants only causes a doubling down and a breakdown in reasonable communication and educational efforts designed to encourage safe behaviors. He does, however, expect that most people will behave and that local business owners will do their best to balance known, basic public health practices with a desperate need to re-balance the economic and psychological traumas and damage that have afflicted the community.

But balancing the two is complicated in so many ways, and Wolfson believes “there is no clean solution outside of common sense and personal responsibility.”

Michael adds that in the U.S. there is a deeper distrust of the government and a profound racial, religious and class-led divide that makes it difficult to control the pandemic. To him, the U.S.’ market-led capital system of chasing profits compounds the difficulty in implementing social measures that can harm trade.

In short, a political economy plays a role in creating weak political leadership that is comfortable with ensuring control of the pandemic first as the only way to fully reopen the economy.

“Business leaders who have disproportionate power in the U.S. system forget that without controlling the pandemic first is the major reason for the cycles of restrictions that we have seen in the country, which in turn disrupts economic functioning,” Michael added.

All those reasons—communal divisions linked to race and economic standing, tentative leadership, no clear direction and market agendas—have led to a mixed desire by the local community to see the city enforce ordinances in the name of public safety, even though everyone knows this pandemic is far from over.

Wolfson, for his part, thinks post Super Bowl spikes in cases may be expected to wave through our community for weeks following the event. That could potentially further exhaust resources at local hospitals still dusting themselves off after the post-holiday surge of coronavirus cases.

What needs to be done

Michael told CL that from the health community, there is undoubtedly a great desire to try all measures available—“including mask and physical distancing ordinances and vaccinations and on the horizon, therapeutics”—to achieve control and even end the pandemic. But even vaccine-induced herd immunity has its own long-term question marks with new variants already circulating in Tampa Bay.

For Michael, to control the complex emergency of this spread, social mandates will be needed through at least April or May to allow for vaccination distribution. Travel into Tampa Bay needs to be screened. If any variant of the coronavirus spreads it’ll negate any positive gains from vaccines.

“ ...there is a strong desire by the local health community to see the City implement and enforce ordinances against the virus… [and] we also need to better engage with the community and hear their concerns so that the reasons for these mandates are clearly understood and not be distorted by agents with political/business agendas,” Michael said, adding that Mayor Castor’s Facebook show is a good step towards better communication.

He added that both folks asked to self-isolate plus businesses and workers affected by coronavirus mandates be supported as they are in places like northern Europe. “It is easy for some of us to self-isolate and work from home but not for a large proportion of workers—the class/economic divide… needs to be addressed,” Michael wrote.

In in the surest sign of satisfaction about last weekend in Ybor, Crowbar owner Tom DeGeorge—who’s been loudest about half-assed efforts by state and local governments to control the virus and help businesses—told CL that he was placated with the increased police presence in Ybor City, the sight of many venues following CDC guidelines and the fact that many of the district’s concerns about plans have been addressed. “I'm optimistic,” DeGeorge said.

He’s hopeful that Super Bowl weekend won’t bring the same crowds the district saw on Halloween and New Year’s Eve, but still finds it hard to stomach watching the city host a Super Bowl and WrestleMania while the live music industry is in shambles with no signs of any national tours coming through until March.

“It’s hard to see so much celebrating,” DeGeorge said. “It was one thing when you'd see clubs getting away with blatantly breaking any CDC, city, and county guidelines but it's a total new level of loneliness, anger, and frustration when you see that the City itself has drank the Kool-Aid.” 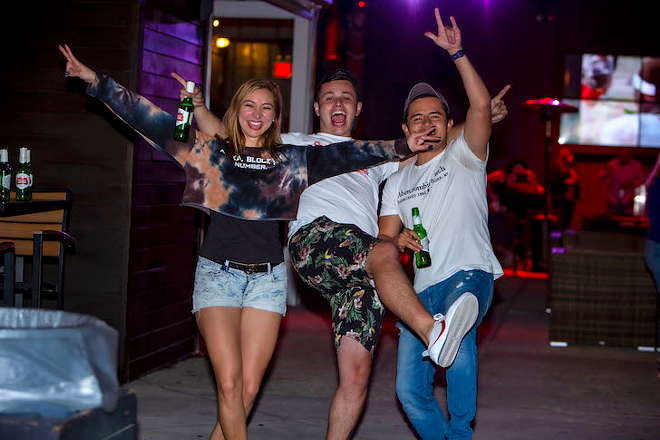 Kimberly DeFalco
Locals show off how to get your favorite bar in trouble in Ybor City, Florida on Jan. 30, 2021.