How a 1939 Florida guidebook led to a journey of rediscovery.

As I troll the backroads, I remain forever in search of that secret backwoods state with its sun-bleached roadside shacks.

My grandfather’s face twisted as we turned off the oak- and pine-fringed interstate and entered the final leg of our southwest journey down US 301. As we passed bleached wood cracker houses, and dingy brown cedar sheds, his tanned forehead furrowed, drawing his coarse eyebrows tighter and tighter together until the bushy lines above his dark eyes disappeared under a thin ridge of curly dark hair. …

My grandfather sucked in sticky-hot Florida air, his silence crowding our weighed-down 1976 maroon Buick Regal. “This,” I can only imagine him thinking, “is worse than what I left in Italy. This is what I have worked my whole life to give my son? That they should move to a slum in the South?”

Cathy Salustri
Apalachicola oyster boats
“This” referred to Florida, specifically, the interior parts of the state detailed along US 301, the parts of the Sunshine State not photographed by any Florida tourism board. “They” referred to my father, my mother, and me: a seven-year-old whose greatest adventure in life, prior to the three-day journey to Florida from New York, was a dead heat between a goat eating my coat at the Bronx Zoo and taking a train to see Peter Pan on Broadway. In a chain of events too complex for my young brain to comprehend, my parents decided to leave Westchester County, New York, and move to Clearwater, Florida. While my parents knew the drive’s end result, a small two-bedroom just miles from then-pristine Clearwater Beach, my grandfather, who had come along to help, did not.

Eventually we turned onto I-275, where the landscape grew noticeably tidier and steadily more sanitized. Our orange-striped moving truck dutifully followed the car as we made our way to Clearwater. The water of Tampa Bay bounced the sparkling sun into our car, and the salt formed diamond crystals on my grubby, sweaty hands.

“Look at that, Cath,” my dad said, his voice reverent. “Look at how clear it is, not like Staten Island at all.” My father still made the sign of the cross on himself when we passed Catholic churches, but not until this moment had I heard such hushed worship in his voice.

I nodded and peered out the window, feeling something new and familiar inside my chest as I gazed at the sandy landscape offering itself to me. I recognized this, much later, as the sense of coming to where I needed to be. …

Today I explore Florida on roads that parallel the interstates, rattling along with the same excitement that thrummed through me that afternoon in our maroon Buick. My beaches have changed, and the strip malls may one day win, but as I troll the backroads, I remain forever in search of that secret backwoods state with its sun-bleached roadside shacks. I feel the quickening inside as a sense of the familiar envelops me. It is that same sense of simultaneous longing and recognition I first felt when the salt water of the Gulf opened itself before me.

It is the feeling of coming home. Cathy Salustri
Chokoloskee
From “Shells, Sugar, and 1928 (SR80 and around Lake Okeechobee)”

…As we plod along the lower swampy third of the state, there’s no doubt that Florida’s chief land use has more to do with working the land than sunning oneself upon it: this route has pasture and planted fields in abundance. In 1939, this tour ran in a straight line from West Palm Beach to Punta Rassa, but we opt to also circle around Lake Okeechobee. Without stops, this route will take just under four hours…

Lake Okeechobee drains south into the Everglades, east into the Atlantic, and west into the Gulf of Mexico. On the Caloosahatchee River’s western edge, bridges connect Sanibel and Captiva Islands to the mainland. Motorists pay six dollars to cross over into Sanibel, the larger of the two islands at just over 10 miles long. Sanibel is barely a mile wide at most parts, with its widest stretch maybe 3 miles across…

The cottages, homes, and shops that pepper the island mimic the colors of a tropical jungle: shocks of fuchsia bougainvillea explode between coral and lemon cottages, peach hibiscus frame the crosswalks, and orange birds of paradise flower between lime-green traveler palms, red Poinciana, the beach. Sanibel’s crescent shape and its position, perpendicular to the edge of Florida’s peninsula, make it an ideal landing place for shells getting washed along the seabed, and shells on the beach mirror and mute the colors of the island: pink Florida fighting conch, cerulean lion’s paw, and lavender olive shells blot out the cream sand.

Every year in February, the Sanibel Captiva Shell Club kicks off its annual shell fair (“Shellabration”) with the Sanibel Stoop. The Sanibel Stoop is named after the stooped-over posture of shell collectors as they scour the beach for cockles, sand dollars, and coquina. During the Sanibel Stoop event at the fair, shellers gather along the beach en masse to mimic that pose. The fair includes other things—shell lectures, shell salesmen, shell books, to name a few—but make no mistake: people come here to hunt for shells. The hunt along the beach, the thrill at finding a perfect Scotch Bonnet, the ache in your lower back at the end of the day—this is Sanibel’s allure. 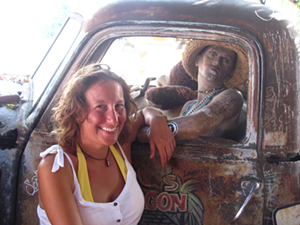 Cathy Salustri
END OF THE ROAD: Cathy Salustri and an aging friend at B.O.’s Fish Wagon in Key West, the final stop in her A1A/US1 journey.
From “Paradise (A1A)”

…Most people—and this included us at the top of this road—have driven roughly 10 miles on A1A and subsequently painted the whole of the road with the tiny brushstrokes they see in those 10 miles, often part of a drunken spring break, early-morning surfing safari, or sightseeing tour of South Beach. None of these things is the whole of A1A; none of these experiences prepare you for the sandy seaside villages interspersed with silver saw palmettos.

In parts, A1A runs right on top of the sand dunes and fronts the cobalt-blue Atlantic. In other parts, it runs through a horrid glut of T-shirt shops and low-rent tourist traps, but every inch of this road speaks to a different part of Florida’s soul. It is, if you will, a compendium of the entire state, although it didn’t exist when the WPA writers toured the state. Instead, the writers toured US 1. I did not do that, thanks to Pop, my great-grandfather.

Pop died before I turned five, so I don’t remember much about him, but I believe I inherited my penchant for road trips from him. He lived in New York, but every year he would head south on US 1 to Florida. He started before Eisenhower created the interstate system, but long after the interstate lay a 2,000-mile trail of black asphalt from Maine to Miami, Pop still drove US 1. He loved it and saw it through the eyes of the Guide writers:

“US 1, and its extension State 4A south of Miami, the longest and most heavily traveled route in the State, enters north Florida over the St. Marys River, runs along the coast, and goes to sea to reach Key West, Florida’s southernmost coral island, only 90 miles from Cuba. For most of its length it runs close to a chain of salt lagoons, separated from the ocean by low-lying islands and narrow reefs. These lagoons, connected by canals, form a section of the Intracoastal Waterway, a popular yacht and motorboat route to and from southern Florida waters.”

As we perched at the top of the state, it quickly became clear: The road described above? Pop’s road? It had shifted. And disappeared…