There’s hair in my food!

Just kidding, but Sharon Norwood’s ceramics might give you a double-take and have you send your food back to the kitchen if you’re the type who freaks over strays in your soup.

Sometimes, getting stuck or lost in studio work is what forces an artist to expand their work. This is what happened to Norwood last year with her figurative paintings, which has led her to her current body of work that has opened a lot of doors for her art career.

“I said, ‘Forget it, I’m just going to go with pencil, ink, paper, that’s it!’ I was trying to think of things I could set up in my still life that would be like a self-portrait and at the time I was thinking about hair, so decided to just draw this line. I just grabbed some of my hair out of my brush and started doing these drawings, not knowing if it would render as hair, but not really even friggin’ caring. I was just trusting the line, letting the mark do what it wants to do,” she says.

Behold the power of the line. Before she got the concept for clay, she started with a simple line on paper after becoming overwhelmed and frustrated, feeling that she was making the same things over and over again. 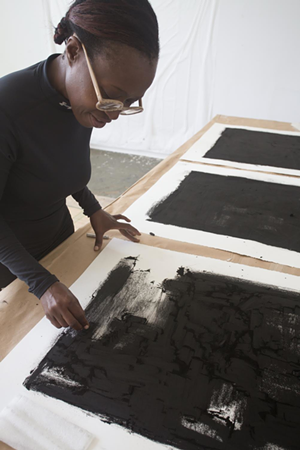 “I felt like I was spending most of my time setting up to paint, so I decided to keep things simple and go back to the portrait by means of still life,” Norwood explains. “When I started showing the drawings to folks, I was surprised that people were recognizing it as hair.”

Hair tends to teeter on that line between sexual and repulsive depending on the circumstance: on one hand, long, silky hair can be attractive (Herbal Essence, anyone?). On the other hand, hair can easily slip into revolting territory depending on where it is on your body, or if it’s detached from the body (and possibly floating in your cup of tea). Playing with cultural as well as universal concepts of hair, Norwood toys her viewers with many layers of meaning.

Ceramics came into the picture after the artist had done a few residencies in old, historical, colonial-esque spaces.

“I was thinking about my body—and these people that came before me—in these spaces, so I wanted to make a connection with that. I thought, ‘Wouldn’t it be great if I got these really expensive plates, like Versace, that cost thousands of dollars and just littered them with these hairs?’ My pocketbook couldn’t handle the price tag, so I went thrifting and bought some materials I could experiment with,” she explains. “I lucked into this really nice minimal, porcelain, high-end dinnerware set, like the kind you would get as a wedding gift. I tested these out for the first time, and they just came out amazing.”

Using repurposed porcelain, she creates ceramic decals using special decal paper (think along the lines of temporary tattoo) and her original hair line drawings to create her surface design. From there, it’s a simple low-fire at around 1200 degrees.

“I love porcelain, there’s so much history behind them, so it just made sense to use it. I think my ceramics is my center, but I’m definitely interdisciplinary,” Norwood says.

While earning her BFA at USF, she spent her time honing her painting skills working with the figure, but the conceptual nature of their program seems to have grown on her. As a 2018 MFA candidate at Florida State University, she’s been developing her hair series for a little while now from ceramics to works on paper, to even animation and photography.

“I took a photography class this past semester with Pat Ward Williams, but I wanted to do experimental photography with found images. I really curated a certain image that I used throughout the Root of the Matter. Most of them are fashion illustrations from the Met around the 1840s. I wanted them to have similar visual aesthetics. I like the decorative aspects of them, so the works look like very pretty things, but have many layers of meaning,” she says.

Her Root of the Matter digital collage series is reminiscent of Kara Walker’s lithographs at Gallery [email protected] at the beginning of this year. The faces of white women are written out in favor for a large, dark hairball. Other models have their faces and arms cut out to reveal the solid, stark white background.

“What I like about this work is that it says a lot of things that are hard to put into words, but they’re there. It’s still a part of me working things out in a public way, but the Roots of the Matter series I did this past semester at school, so it’s really new,” she says. “When you first get into grad school, you go in with this work you’ve made before, but you want to push yourself, so I ended up making a bunch of stuff. I’ve started to notice that I like working with technology, especially the laser printer.”

“Another series I did was my Scar series. There was this interesting story of Gordon the slave (aka Whipping Peter, an enslaved African American who escaped a Louisiana plantation and eventually became a free man once reaching Baton Rouge), and his back was just completely scarred. I traced all of the scars, and etched it out on paper. When you held up the paper, it was this delicate mark that was just beautiful. That’s what’s interesting about this work: the audience is seduced by these delicate lines and marks, then they are taken aback once they realize what they’re looking at,” Norwood says.

Since her debut earlier this year as an Emerging Artist in the Gasparilla Festival of the Arts, she will have work featured in Atlanta Biennial at Atlanta Contemporary Art Center opening Aug. 27.

In her Split Ends series of ink on paper or vellum, the artists describes the work as “the hair as a landscape,” even calls one of her pieces “Untitled Landscape.” I ask Norwood if this is an invitation from the artist as something to be traversed across.

“Yeah, I think an invitation is a good way to put it. When I was first thinking about these series, I definitely had landscape on my mind, and I was thinking about an undiscovered place. I knew I wanted to get the figure out of it, so it became this new, imagined space you have to travel into,” she says. “The drawings became a way of seeing hair in its natural form instead of changing it, so it becomes this unfamiliar landscape.”

Sometimes it’s more interesting in what the artist refuses the viewer than what they are willing to give up. Keeping more anonymity in the pieces, whether they are portraits or self-portraits, there’s a literal and figurative separation from the body. Despite this detachment, the work is left open for interpretation.

“When I thought about doing the figure or portrait, I didn’t want it to be one specific person: I wanted it to be universal, so anyone can come to the work,” Norwood says. “If people come to the work and are challenged to have a quiet conversation with themselves about how they feel about these topics, I think that’s a good thing. I don’t think I’m necessarily saying you need to feel this way or that way, but if people connect with the work in a way that offers introspection, I think that’s important.”

Before getting into the fine arts, Norwood was a graphic designer for many years in Canada. There’s a line that has carried over from graphic design to her new drawings, and that is that line itself has the power to evoke so much in its complex simplicity.

“I’m like a late starter with art. I did a lot of things before starting up, but art was always there though. In Canada, visual art wasn’t something I really thought about or was valued much where I was living. As a self-taught graphic designer, there was always this feeling of inadequacy because you’re not quite sure of what you know or what you don’t know. So when I first realized I was interested in becoming a painter, I wanted to go to school because I didn’t want this ‘inadequate’ cloud over my head,” Norwood says.

Since stumbling into the arts, standout art influences for Norwood are Sonya Clark, Lorna Simpson, and Kerry James Marshall. All of these artists explore how socially constructed identities undercuts the complexity of forming your own identity, which is something Norwood can relate to.

“Growing up being Jamaican-Canadian, I’m always questioning these narratives. I’m always questioning stuff. For example, I question how so many crimes could be committed every day, so how does the media get the news to your table? What news makes it and what does not? Growing up in a culture in Jamaica, I never felt inadequate: When I went to the bank, took the bus, or went to church, there were people who looked like me in all of these spaces. When I lived in Canada and navigating those spaces, I became aware that my stories weren’t anywhere,” she says.

As a child, Norwood was always reading these fantastical story books with white protagonists, trying to find a way to fit into them so she wouldn’t feel like a spectator on the outside looking in. The artist recalls when she was four years old, she asked her father for a black doll.

“I always wanted to write a narrative that was complete, something I could relate to,” she says. “In navigating the world, I was always sort of trying to create a space where I was part of that narrative in the positive way that matched the way I view myself.”

Making room for a multiplicity of underrepresented narratives in this world, this emerging artist is worth keeping tabs on. She’s going places.

Urban Dictionary defines Femme Fatale as “a woman with both intelligence and sex appeal that uses these skills to manipulate poor helpless men into doing what she wants. May cause death.” Keeping in line with this concept, the women highlighted in Caitlin Albritton's "Femme Visuale" series aims to highlight local women artists and show off some lesser-known talent that's been hiding in the shadows. In the art world, if it ain't big and loud, it ain't being seen (looking at you, Koons). Art as a grand spectacle leaves little room for modest, sincere, or quiet voices, especially women's voices. And I promise, we won’t bite.