No way they take an L against the Dirty Birds. 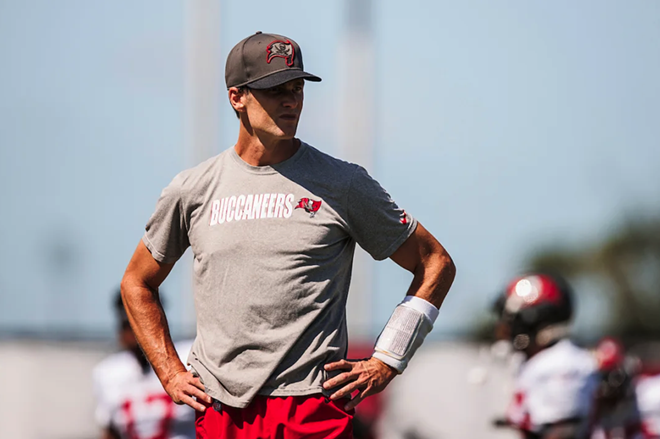 Photo by Tori Richman/Tampa Bay Buccaneers
Despite all the TB12 divorce rumors, his rotator cuff issues, and all the injuries plaguing this Bucs team, Tampa Bay won’ have many problems with the Marcus Mariota-led Falcons.
The Bucs have been on a tough stretch here recently, playing some solid opponents that’ll likely top their divisions come playoff time.

Luckily, that stretch ends this week, with Tampa Bay taking on the pretty bad Falcons Sunday afternoon for a 1 p.m. home game at RayJay.

Atlanta flies in on a two-game winning streak, with victories against the Browns and Seahawks and a 2-2 record.
While it’s encouraging for the Dirty Birds to be able to take advantage of very weak opponents, do not expect the Bucs to lose.

Despite all the divorce rumors surrounding Creative Loafing Tampa Bay Readers' favorite couple, Tom Brady's rotator cuff issues, and all the injuries plaguing this Bucs team, Tampa Bay won’ have many problems with the Marcus Mariota-led Falcons. The Bucs are simply too talented on both sides of the ball to take an L at Raymond James Stadium.

Expect a Bucs defense that looked horrible last Sunday against Kansas City to return to form and dominate the way it did in the first three weeks.


Follow @ctbrantley12 on Twitter and listen to him on the RBLR Bucs podcast
The Falcons have a decent enough offense, but with tight end Kyle Pitts dealing with a hamstring injury and his role already undefined, plus running back Cordarrelle Patterson on injured reserve, the Bucs won’t have nearly as much to worry about this Sunday.

My prediction for a final score will be a Bucs 27-10 victory, with Brady having one of those game-manager afternoons and the defense forcing turnovers and flying all over the field. Of course, with the Falcons lacking any significant pass rush, Brady could also have a wonderful game due to him being able to sit there, call his divorce lawyer, read the defense, and find any one of his elite receivers over the middle for huge gains on a consistent basis.

Hopefully we’ll be firing lots and lots of cannons due to the first home victory of the season for the Bucs.