There's hope for us all, then, isn't there? 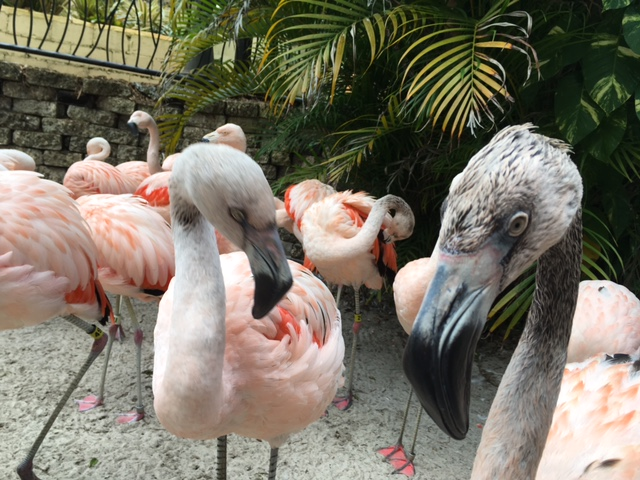 Arin Greenwood
A perk of being a journalist: up close encounters with flamingos.

At 60 years old, Lucy the flamingo is no spring chicken. But she's evidently feeling the blush of youth once again — and has gone and fallen in love.

Lucy is one of the original flock of 17 flamingos, brought to live in Sunken Gardens in 1957. As of a couple of years ago, she and another bird named George were the sole survivors.

That replenishing finally happened this past April, when 20 whippersnappers procured from the San Antonio Zoo arrived, to much fanfare.

Well, as it turns out, it's not just the public and the media who've been excited about these newcomers. They've also "seemed to get Lucy very excited," O'Grady said on a recent Wednesday, while giving Creative Loafing a behind-the-scenes tour. "She laid an egg. She's 60."

There is at least one record of a 53-year-old flamingo successfully breeding. And Saint Joseph's University professor Matthew J. Anderson, an experimental psychologist specializing in animal behavior, flamingos in particular, said in an email that "adding more/new flamingos to a captive flock often is associated with an increased likelihood of breeding behavior."

Indeed, O'Grady chalks Lucy's eggs up to what he perceives as her enthusiasm for being part of a flock again — and more specifically to her interest in the bird tagged as 02, who has, he says, "become the alpha."

02 usurped this role from George, who put up something of a struggle at first. Then, "they had a little discussion about it, and that's it," said O'Grady — before reassuring a reporter who may be a wee bit overly invested in flamingos' emotional well-being, that George is still doing "fine just being in a flock. He is still his usual self."

Back to Lucy, who's got a little competition — two other female birds have also laid eggs; hey, flamingo mating groups are a complicated thing. None — including Lucy's - has yet been fertilized. In fact, we don't even know if there's been any flamingo nooky yet — O'Grady said he's seen courting behavior amongst the Sunken Gardens flamingos, "but not actual mating. I suspect spring will be different."

When eggs are laid, Sunken Gardens checks for embryos by "candling" the eggs. Should there be babies growing, they will likely be dispatched to Busch Gardens, or another facility more equipped to manage the delicate task of incubating and raising newborn flamingos. And yeah, just take that in for a moment: newborn flamingos.

"As far as we know, Sunken Gardens flamingos have never produced any offspring," said O'Grady. "Yet..." Arin Greenwood is an animal writer who writes for American Pets Alive! and the Human Animal Support Services project, in an effort to change the future of animal services and keep pets and people together. Arin is author of the novel "Your Robot Dog Will Die," which won Creative Loafing's Best of the Bay Award...
More
Scroll to read more Local Arts articles
Join the Creative Loafing Tampa Bay Press Club