The former vigilante Hawk from DC’s Titans finally gets top billing in his own series, and he hopes to bring many more Jack Reacher adaptations to the small screen. 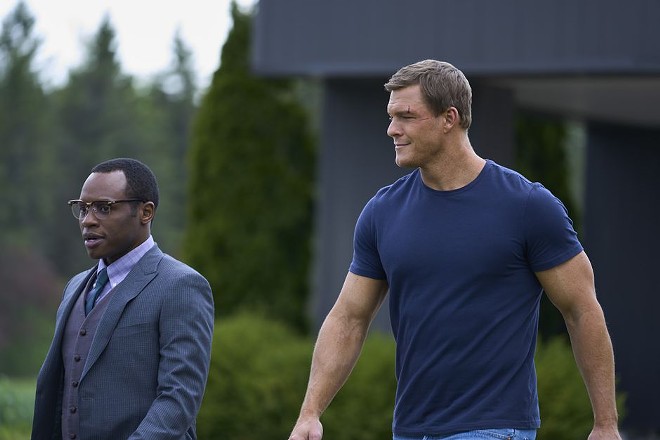 Photo via Shane Mahood/Amazon Studios
(L-R) Malcom Goodwin and Alan Ritchson, a Florida native and current Panhandle resident in 'Reacher.'
There aren’t a ton of literary characters who evoke a specific mental image whenever you hear their name, but of the ones who do, few strike as imposing a presence as Jack Reacher, the fictional hero at the heart of 26 novels authored by James Dover Grant, aka Lee Child.

Reacher, in the novels, is described as a beast of a man, 6-foot-5 with a 50-inch chest; the kind of person you notice as soon as he enters a room.

That didn’t stop 5-foot-7-inch Tom Cruise from stepping into the character’s shoes for two ill-fated and under-whelming films in 2012 and 2016. To say fan reaction was visceral would be an understatement.

Reacher
3.5 out of 5 stars
Now Streaming on Amazon Prime

Six years later, we can all rest a little easier knowing that the real Jack Reacher, the brutally-efficient ex-military officer with unrivaled intelligence and cunning, is finally, properly being represented—by Alan Ritchson, a Florida native and current Panhandle resident, no less.

Ritchson, an actor many might recognize from DC’s “Titans,” he played Hank Hall, aka Hawk, might be an inch or so shorter, but his massive frame and magnetic personality still filled a hotel room during a recent press stop in Tampa to promote the new Amazon Prime original series, “Reacher.”

Though he’s never spent a lot of time here, Ritchson said he had visited before, years ago, on school trips to Busch Gardens.

“My Dad was in the military. We moved around a lot. Eglin Air Force Base is the largest Air Force base in the world, and that’s where my Dad was stationed the longest, so I grew up in a little town called Niceville,” Ritchson said. “You know, I couldn’t wait to just get out of town and figure out what life had in store for me. (The) first place I moved was Miami, so I’ve been in Florida a long time.

I eventually found my way to L.A., and like most 18-year-old, 19-year-old’s do, ‘I’m leaving home and I’m never coming back!’ I’ve got three young boys, and when my first was born, my wife decided it’s best if we have a place near grandparents where they can grow up near them, see them and I can get help with the kids when you’re working…so yeah, we moved to Santa Rosa Beach and it’s been great. I love being there.”

For this new iteration of “Reacher,” showrunner Nick Santora (“Prison Break,” “Scorpion”) and the creative team tackle one novel for the show’s first season, which is Child’s first Reacher story, “Killing Floor.”

Ritchson said he had never read the source material prior to being considered for the role.

“The process to get the part was long, so I had about a year, and when I started to realize I think there’s a really good shot at this, obviously I need to do my homework. I picked up the books and I raced through all 24. I couldn’t put them down. So, I’m as big a fan as anybody, and I mean that, sincerely. In fact, I re-read them, just for fun. I’ve read a lot of them twice. I just love the books. I love them,” he said.

And while he’s never seen the two Cruise adaptations, Ritchson said he still felt the weight of meeting or exceeding expectations.

“There’s a unique kind of pressure that comes along with that because usually there’s this external, everybody’s got an expectation, whatever version of Reacher comes alive in their imagination, they want to see that come to life on the screen,” he explained. “But there was this internal pressure, oh my gosh, I have to get this right, I love this series so much. Usually, it’s about blocking out that external noise; for me, it was also about blocking that internal, better not screw this up.”

Thankfully, we can report that Ritchson and Co., including his co-stars Malcom Goodwin (“iZombie”) and Willa Fitzgerald (“Scream: The TV Series”), have forever expunged any lingering resentment about how the character was previously presented.

Both “Reacher,” as an eight-episode series, and Reacher, as a formidable, unstoppable blunt force, are calibrated perfectly. The hour-long episodes are well-paced and packed with some decidedly brutal hand-to-hand combat. And damn near every episode includes a supporting character commenting on Ritchson’s hulking frame, which never fails to elicit a smile.

The first episode, “Welcome to Margrave,” which has Reacher arriving in Georgia after getting on a Greyhound in Tampa, and promptly being arrested for murder, establishes its bare-knuckle brawling style early on after Reacher is sent to a state penitentiary to safeguard a key witness. He soon finds himself surrounded in a cramped bathroom, squaring off against multiple assailants with only his fists and found objects to defend himself.

“Buster Reeves is stunt coordinator, and designed those fights, and he’s one of the best in the world at that,” Ritchson said, his face beaming. “It took a couple of months to get that fight right. It’s a five-on-one fight in a prison where everything on his body and in his environment is a weapon. It’s fast and brutal and precise. He fights with this almost like a layer of telepathy involved. His Spidey senses are going off, what’s behind him, what’s around him, so to get all that timing right took a long time.

“Fighting is nothing new to me, but this particular style was new and it took us really breaking down my habits and reforming them. I had to reshape the way that I move. We kind of deconstructed my kind of fight style and rebuilt it from the ground up.”

While nothing is ever guaranteed, Ritchson certainly sounds like he wants to continue embodying Reacher for as long as he’s able. “I told them when we started shooting, I told the studio, guys we have to start shooting two seasons a year because I don’t want to age out,” he said, laughing. “I want to see as many of these books come to life as possible.”