The Tampa theater company is performing it on select nights and afternoons through Dec. 18. 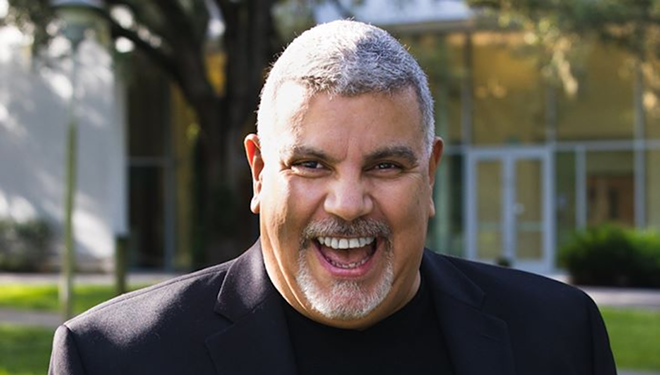 JL Rey headshot
In 'Christmas Contigo,' director Rey is also a comic warrior as the loud, hysterical uncle Pucho.
"It’s the most wonderful time of the year!”

So goes the ubiquitous carol first introduced by Andy Williams. But for many the holiday season is a two-edged sword. However, fear not, Christmas Contigo (literally “with you”) is Stageworks Theatre’s “holiday gift” for all, regardless of ethnicity—much like Fiddler on the Roof’s celebration of “Tradition” is as universal as it is Jewish.

"Christmas Contigo"—which runs at Stageworks in Tampa on select nights and afternoons through Dec. 18—celebrates a Noche Buena (Christmas Eve) family reunion with an unexpected twist seen through the prism of a Cuban family that sets us up laughing out loud and then punches us in the gut. If Carlos-Zenen Trujillo’s script is a bit of a sitcom, it really doesn’t matter because director JL Rey has his cast believing. They’re as excited, true, and enthusiastic as a youngster waiting in line to sit in Santa’s lap and spill their dreams for Christmas morning. Playwright Trujillo balances real life situations with a slapstick world bubbling over with the magic of family, apologies, and unalloyed joy. And Rey has his excellent cast functioning on all hilarious cylinders.

But this roller coaster of a comedy is also about secrets. Only child Iris (Gaby Alezard) is full of guilt; she lives in an anxious place as she returns to Hialeah from law school at Berkeley. She’s about to surprise her very blue collar Cuban family with something she picked up in law school—a Filipino fiancé named Brian (Chris Cordero) who has other secrets that are best discovered in the play.

On clear display is the generational conflict between Rosa (Jessica Moraton) who remembers the repression of living under Castro and her Americanized daughter who, though born in Cuba, has no taint of political repression. However, the show is a riotous comedy. Father Juan (Paul Castaneda) reminds his daughter that “we’ve been through so much—dictator, after dictator, then immigration, then being alone in a place where we didn’t speak the language and didn’t know anyone. If we didn’t laugh, what would we do.” And Rosa emphatically reminds her daughter, “We’re COO-BAHN; everything is dramatic.”

There is a cartoon atmosphere to certain elements—a flatulent dog, a whole hog butchered for the traditional “lechon” feast with plenty of garlic and oregano, but it’s easy to go with the flow and suspend your disbelief. Director Rey is also a comic warrior as the loud, hysterical uncle Pucho, who in his effort to speak perfect English gives playwright Trujillo a mouthpiece for a series of malapropisms. The extended family constellation is complicated by the LGBTQ cousin Maravilla (Diana Lopez) and aging Abuela Violeta (Lillian Almodovar) with Alzheimer’s. Trujillo explores the chaos before Christmas for this multi-generational family through mother-daughter relationships and remembrance of things past with universal echoes.

Producing Artistic Director and Sound Designer, Karla Hartley, keeps the design elements at Stageworks in the top tier by continuing her aural magic and hiring perennial award winners Frank Chavez (Sets & Costumes) and Joseph P. Oshrey (Lighting) whose artistry is a gift that keeps on giving. Chavez’s Hialeah residence is a wonder with nooks and beams, a balcony and an altar. It overflows with garlands and bows and multiple Santas. Rosa, you see, suffered under the regime and the lack of liberties which didn’t allow the effusive accouterments of American Xmas—Mr. Claus, an abundance of lights and garlands plus a Christmas tree which requires a Marx brothers routine to get it in the front door and attached to the wall where it soars two stories high. Oshrey’s lighting, as always, is by turns subtle, evocative, and dramatic. And Chavez’s contemporary costumes are appropriately stylish or gritty and, in the case of Abuela, surprisingly vivid.

Director Rey, who created his uncle role in the world premiere in Oregon, keeps the action humming and full of telling details as we explore dominos, dancing, Cuban coffee as rocket fuel and enough offstage rum to continue the Marx Brothers analogy. The script doesn’t require any knowledge of Spanish, but I must say the large Latino opening night crowd roared many times when I was just trying to recover.

What Christmas Contigo reminds us all is that we humans are more alike than we are different, that strong family ties breed happiness, and that true love means allowing others to be themselves to pursue their dreams. In a season swirling with so many religious traditions, it’s still unquestioned that an open heart brings pure joy. You can’t possibly leave Christmas Contigo without your soul overflowing with the holiday spirit.