On March 31, head to the Tampa Museum of Art for CL's fourth annual smorgasbord of performing and visual arts. 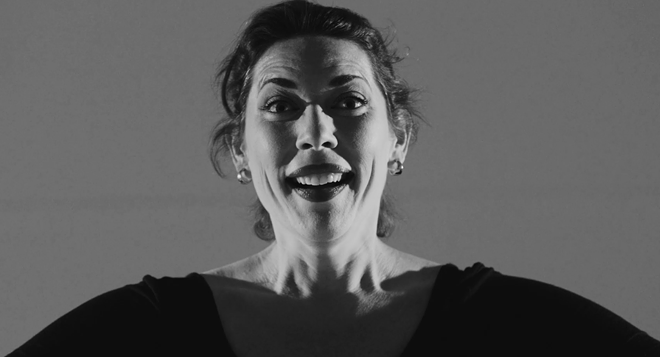 That’s a lot to promise, but I can offer proof in advance. Just go upstairs to the Tampa Museum of Art in the next few weeks and see the two shows currently on view. Alex Katz: Black and White, an overview of B&W portraits and landscapes by the world-famous, almost-nonagenarian Katz, makes an immediate, stunning impact. The same can be said for the many astonishments in Who Shot Sports: A Photographic History, 1843  to the Present.

During GASP!, taking place from 6-10 on Friday, March 31 at the museum, you’ll not only see those works in person, you’ll get the chance to see them interpreted by top artists in other media, from fiction to playwriting to musical theater to dance. Borrowing a page from Keep St. Pete Lit’s Fantastic Ekphrastic, we’ve invited writers, actors, dancers and more to respond to the Katz and Sports (Sportz?) shows in what we’re calling GASP!-Phrastic.

But that's only one of the attractions at GASP!, the only festival during Gasparilla Arts Month that focuses primarily on the performing arts. At any given moment during the evening, you could see a balloon-art recreation of a Magritte painting, a human skill-crane machine, a steampunk pole dance — it's a kaleidoscopic evening of theater, dance, music, spoken word and more. The complete schedule will be published in CL the week of the event, but here’s a taste of the talent roster.

Brian Feldman: “The Skill Crane Kid.” A truly original performer from Orlando, he’ll be doing residencies at the Morean Arts Center and in St. Pete kitchens later this spring, and for GASP! he’ll be crawling inside a Skill Crane machine for a sideshow performance like nothing else.

Mark Byrne the Balloon Guy: “Magritte & Me.” A mind-blowing homage to the surreal  art of Rene Magritte using sleight of hand, levitation and, of course, balloons.

The Real Clash.The mega-talented seven-piece band out of  St. Petersburg College’s Music Industry/Recording Arts (MIRA) program brings “the soul of hip-hop without all the additives and fillers.”

Sheryl Oring: “Greetings from Tampa Bay.” In this collaboration with the museum and Tampa International Airport, artist Sheryl Oring, in the guise of a ’50s stenographer, types the tales of GASP! fest-goers, which will eventually become part of an installation at TIA.

Helen Hansen French: “Fledgling No More.” The exquisite dancer from The Palladium’s BEACON series in a dance inspired by “The Pinnacle,” a painting by fellow Creative Pinellas grantee Steven Kenny.

Arielle Lane. The mistress of the musical saw.

Audrey Richter/Collective Soles: “Magdalena.” A tribute to the life, legacy, and artwork of Frida Kahlo, this dance solo experiments with color, texture, and display as an ode to the feminist artist’s iconic paintings.

Scott & Patti. The inimitable mother-son act embodied and sung hilariously by the team of Matthew McGee and Scott Daniel.

David Manson/Mobile Itinerant Funk Unit. A marching band that brings the funk, with brass, percussion and other joyful noises.

Impulse Pole Dance. A troupe known for athleticism, grace and a lot of pure “Wow!”

Susannah LeMarquand & UT Dancers: "Four-Fifths." The joyous culmination of a two-year study by the University of Tampa choregrapher and her students.

Noel Rochford. The lead singer of UNRB returns for a solo gig this year, what he describes as “a psychedelic electric ukulele hybrid experience.”

The Heard Em Say Youth Arts Collective GASP! Poetry Slam. Young poets with something to say and the chops to make themselves heard.