As in lines round the block, which is what all those shows are attracting in NYC 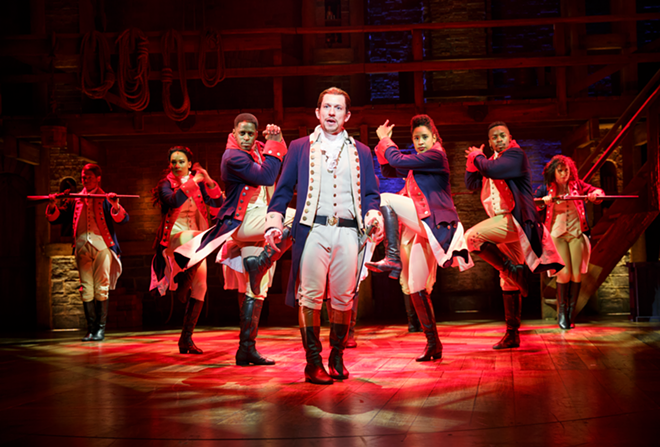 The word "blockbuster" gets thrown around a lot in arts promo circles, but the 2018-19 Broadway series at Tampa's Straz Center for the Performing Arts can legitimately be labeled a blockbuster season. Heck, it's positively blockbusting at the seams.

We already knew Hamilton would be coming to town; the center has been hyping its arrival since last spring, after all. But Sunday's season announcement also brought the news of two other Broadway hits that, like Hamilton, have been impossibly hot tickets: the Hello, Dolly! revival and Dear Evan Hansen.

While we don't yet know who will be playing the title characters, you can be assured they will not be Lin-Manuel Miranda, Bette Midler, or Ben Platt, whose performances helped create the shows' original buzz. (In the case of Evan Hansen,  a published report in the Tampa Bay Times stated incorrectly that Blake H. S. grad Taylor Trensch would be playing the title role; although he's currently starring in the Broadway production, the Straz tells me nothing's been decided yet about the touring cast.)

But you know what? I would wager all three of these shows will work no matter whom you see in the leads. I saw Hamilton on Broadway with Javier Muñoz in the title role; he's a better singer and actor than Miranda, and the whole damn show was every bit as good as everyone said it was. And yes, Bette as Dolly was big news when the show opened, just as Bernadette Peters as Dolly is the big news now, but the production (which I haven't seen yet) is purportedly so lavish that I suspect it'll be a must-see no matter who's playing the meddling matchmaker. And Evan Hansen, which is also as good as everyone says it is, will be thrilling no matter which up-and-comer gets to play the demanding title role of the lonely teen trapped by his own deception who in the process gets to sing passionate show-stoppers like "Waving Through a Window" and "You Will Be Found.”

Here's the full Broadway series schedule, which also includes Come From Away, about the airline passengers who were re-routed to Newfoundland on 9/11 (a musical some regarded as 2017's best, although Evan Hansen took home most of the Tonys); the intriguingly wacky-sounding The Play That Goes Wrong; the romantic epic Anastasia, from the Ragtime composer/lyricist team Stephen Flaherty and Lynn Ahrens, with book by Terrence McNally; A Bronx Tale, the musical based on the autobiographical yarns of actor/writer Chazz Palmenteri (which also spawned a Robert De Niro flick); and a "Broadway encore" of Les Miserables.

Current Bank of America Broadway at The Straz season ticket holders must renew by March 12 to guarantee their seats. Patrons also can sign up now to become new season ticket holders. New season ticket orders will be limited and will be handled in the order they are received. For more information, email the Straz Center at [email protected]strazcenter.org or call the StrazCenter Ticket Sales Office at 813.229.STAR (7827). Individual show tickets will go on sale at a later date(s), to be announced.