Along with turtles, dogs and cats — and a gecko.

Lisa Presnail
Sure, he had a good four years, but how will he pay off his student loan debt?

We live in confusing times. It can be hard to make sense of the current environment. On Tuesday evening, May 9, however, there was the sort of life-affirming event that gives you some faith in the world — or, at least, faith in St. Pete.

It was the fifth annual pet graduation, at Eckerd College, which is said to be this country's most pet-friendly college. In a truly moving ceremony, President Donald R. Eastman III — a President Donald with whom we have no beef — acknowledged and celebrated the pets of graduating seniors. This year, the pet graduation included nearly 30 dogs, cats, snakes, turtles, guinea pigs, and a hedgehog.

It all got underway right around 5:30 pm — the same time, you might recall, as the more troubling President Donald was, surprise!, firing FBI Director James Comey — in Eckerd's Fox Hall, where you found plates of cookies and boxes of Milk Bones put out for those who showed up a little early.

During this time, Eastman told Creative Loafing he sees the pet graduation as a perfect symbol of the college itself, with its eclecticism, and its love for animals.

The ceremony opened with a lovely invocation, delivered by associate chaplain Libby Shannon:

It was you who had the good sense to create the animals first, oh God.

It was you who declared the birds of the air, and the fish of the sea, and the beasts of the land, good from the beginning of time.

Eastman spoke on the topic of animal consciousness — which is a growing field that has major implications for how we coexist with Earth's nonhuman residents — before the pets' names were called out, so they could come onstage with their human companions.

Lisa Presnail
Together, each human/animal unit walked across the dais — many pets wearing tiny caps and gowns, their people dressed in sundresses and shorts — and shook hands/paws with Eastman. They received their certificates and a commemorative pet tag, amidst cheers. Commencement for the students isn't for another couple of weeks. Some friends and family had come a long way to be here for this celebration, as well.

While the dogs were wagging their tails and taking the hubbub in stride, some of the cats seemed less ready to face the day. We get it, guys; it's a remarkable achievement to graduate, but moving on isn't easy — especially into a world like this one, with the chaos and uncertainty confronting everyone, not just those who are at the beginning of their adult lives.

Effy, cat to psych major Samantha Bingham, glanced around the room through the whole event looking a bit bewildered.

"I think she's a little confused," Bingham said. "She's the embodiment of how everyone feels right now."

(It was harder to get a read on how the reptiles in the room were feeling. We need to learn more about animal consciousness...)

Graduating senior Claire Russell is going to be Eckerd's student commencement speaker this year, at the still-to-come ceremony for humans later this month.

She's had her dog Sierra since she was 10, and said there's something special about growing up with a dog, then completing college together as well.

"It feels like she did this, too," she said — then, to her big, fluffy, cap-and-gown-wearing dog: "You graduated before I did!" 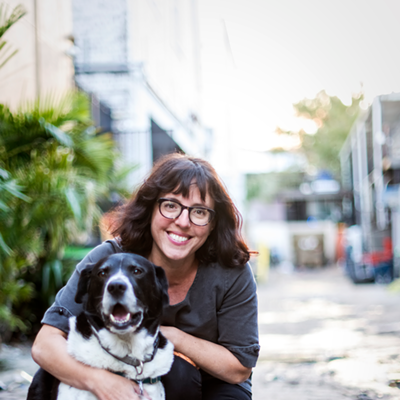 Arin Greenwood is an animal writer who writes for American Pets Alive! and the Human Animal Support Services project, in an effort to change the future of animal services and keep pets and people together. Arin is author of the novel "Your Robot Dog Will Die," which won Creative Loafing's Best of the Bay Award...
More
Scroll to read more Travel & Leisure articles
Join the Creative Loafing Tampa Bay Press Club