The Floridian fantasyland is in the Warehouse Arts District.

Photo by Bob Croslin/Design by Jack Spatafora
Fairgrounds St. Pete's 'Everglades Arena' which is home to a projection-mapped video wall that cycles through a day in the Everglades.

When I first visited Fairgrounds St. Pete in April 2021, scenic painter Chloe Castillo was painting an ocean on the floor. Nearby, Joshua Hall, aka Baghead, mapped out a post-apocalyptic Everglades in painter’s tape next to a gator’s gaping jaws. Co-founder and CEO Liz Dimmitt stood on a ladder surrounded by bins of Florida seashells, which she was sticking into ready-mixed grout on the wall before her like tiles in a mosaic.

“Usually I’m in there with my mother,” Dimmitt said in a phone interview. “My mom is an incredible artist. She had a shell room at her house that I worked on in college… and now, 20 years later, we're shelling a room at Fairgrounds together.”

Shelling a room with mom is just one of many Florida experiences that inspired Dimmitt’s Florida fantasyland.

Dimmitt grew up in Dunedin. Her parents, both native Floridians, introduced her to Florida’s natural attractions, arts and culture at an early age.

“I am from a family that is very arts-oriented but also very outdoorsy,” Dimmitt told Creative Loafing Tampa Bay. “When I was little, we did canoe trips, kayaking trips. I've been to almost all the state parks. I spent a lot of time exploring Florida and all of its wonderful places, from the kitschy Cypress Knee Museum-type things to epic trips down rivers…”

She remembers trying to sell shell earrings as a child, going on Florida road trips with her family, and contemplating a career as one of Weeki Wachee’s legendary mermaids.

Instead, she embarked on a career in finance. She spent 17 years living and working in New York City, but says, “you can never really escape the Florida.”

“Florida is in the news all the time,” Dimmitt told CL. “You travel to Europe or anyplace else in the world, and people seem to know about New York City, L.A. and Florida. That's what the whole world knows about the United States.”

For Dimmitt and others on the team, Fairgrounds is a coming home of sorts. As Dimmitt worked her way back into Tampa Bay’s art scene, she collaborated with the Vinik Family Foundation on large immersive art projects in Tampa, including “The Beach Tampa” in summer 2016 and “The Art of the Brick” in summer 2017. She also helped bring Yayoi Kusama’s Infinity Room “Love is Calling” to the Tampa Museum of Art in fall 2018.

As she transitioned back to living in the Tampa Bay area, Dimmitt says she knew she wanted to do some sort of arty project. “I wasn’t thinking as large-scale as Fairgrounds is now, but I was thinking that I could find a warehouse and do some cool stuff,” Dimmitt told CL. So she talked to family friends Kara and Jordan Behar.

"I knew of their architecture office in the Warehouse Arts District in St. Pete,” said Dimmitt, “and I knew that they had roots on the ground. So I asked them to keep an eye out for any warehouses or property coming up and available.

The Behar and Dimmitt families acquired the building together knowing that Fairgrounds could become the anchor tenant, but Dimmitt admits, “I had to start thinking bigger.”

"In early 2019, I was telling people in St. Pete what I was doing, and thinking about how I was going to do it,” Dimmitt told CL. “John Collins of the St. Pete Art Alliance said there was this artist I had to meet, and that was Mikhail.”

Mikhail Mansion started his career working on electronics, flight and weapons systems in the Air Force, but he’d always been a creative person.

“I was always interested in art and creative work as a kid,” Mansion told CL. “I didn’t recognize it as a practice, but I was constantly tinkering.”

Although Mansion values his Air Force experience, he was conflicted about weapons work. “I took away good things and came back from that experience with more of a determination to do art, but to use technology to make a career as well,” he added.

Art and technology finally came together for Mikhail within the University of Tampa’s Electronics Media degree program, where he met his wife—Fairgrounds Director of Communications Olivia Mansion—in an undergrad class called “Art and Technology.”

“Our whole life has now become about art and technology,” Olivia said.

In 2019, the two formed an arts and technology consulting firm called Trans Mission and started hosting arts and technology meetups at Duncan McClellan Gallery in St. Pete. Mikhail was already contemplating creating an arts & technology space in the Tampa Bay area when Dimmitt reached out.

“We started talking about our visions and art, and we just really aligned,” Dimmitt said. She became Trans Mission’s second client. But as Mikhail got “deeper and deeper into the Fairgrounds world,” he ended up joining the company and co-founding it with Dimmitt.

"Mikhail is such a talented artist and technologist,” Dimmitt comments on the partnership. “Having someone with that skill set amplifies. [He] makes all the ideas I have even bigger and better because of technology. I think we both really feed off each other and expand each other's visions.” 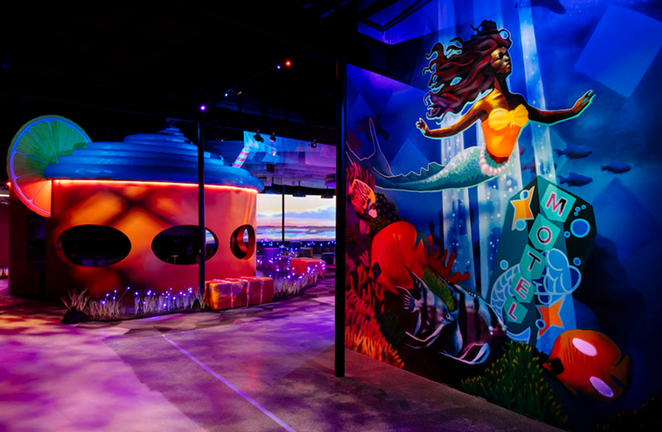 Bob Croslin
'Mermaid Motel' by Zulu Painter and CentCom which will house some of Fairgrounds St. Pete's most interactive tech elements.

Using Florida as their muse, Dimmitt and Mansion divided Fairgrounds into themed spaces like the Mermaid Star Motel which I’d come to see. A colorful mural by Zulu Painter greeted me as I entered the Mermaid Star Motel section of Fairgrounds. As I turned the corner, I saw the Motel’s South Beach-inspired art deco façade. The Fairgrounds team couldn’t find a retro motel sign that fit their vision, so they made their own from scratch.

“It’s the most iconic visual that tells the story of the whole roadside motel and the whole [Fairgrounds] environment,” Mikhail told CL. “We want people to be able to walk in and just get it.”

Mermaid Star Motel is one of Fairgrounds’ anchor spaces, each created by designers and commissioned artists to tell a different Florida story, from the beauty of the Everglades to the Twistee Treats of our youths.

“To put your imagination around Florida stories, you don’t have to stretch too far,” says Dimmitt, “because there are so many wonderful stories out there and incredible storytellers writing and producing things about Florida.”

The Motel combines the real story of people discovering Florida through tourism with a Weeki Wachee-sized dose of mermaid mythology. When Dimmit and Mansion saw the original warehouse space, they envisioned the old office spaces as motel rooms. Then they used art and technology to create stories around these spaces.

“Like, there’s motel owners and they’re kind of mysterious,” says Mikhail Mansion. “And then there’s guests who come to stay there you learn about as you go through the experience. And they’re up to things…”

“Every element becomes part of the story,” says Dimmitt. “There’s going to be a brochure rack in the motel lobby, and the brochures—we’ve made all of them. They’re really funny and fun. I laugh out loud every time I look at them.”

Even in the incomplete stage I saw it in, Fairgrounds was starting to look like something real. Already, I can imagine walking through their fantasized ‘glades and roadside motels like a teenager walks through a haunted house on Halloween.

Except Fairgrounds isn’t haunted at all. It’s more like a Florida dream, where mermaids are real and anything can happen. It’s a bold and beautiful celebration of the Florida magic and paradise mythology that have drawn people to Florida for years, and it’s poised to become one of this summer’s hottest art attractions.

“We’re in that final sprint where it’s all a bit crazy, but it’s also wonderful,” Dimmitt told CL. “The things that we’ve been imagining for two years are now coming to life, and it’s very rewarding.” Stephanie Adamo
Mermaid Motel’s South Beach-inspired art deco façade. The Fairgrounds team couldn’t find a retro motel sign that fit their vision, so they made their own from scratch.