The challenges facing every artist in New York can seem insurmountable: sky-high rents, a shortage of affordable studio space and an abundance of competition spilling in each year from all over the world. Perhaps the most precious commodity of all is time: time spent waiting for the A train to arrive or for the work day to end, time spent doing anything but making art.

It's a life that can make you wonder if you have it in you to keep going.

"This happens daily for me," admitted painter David Giansante with a laugh. "You just keep on pushing."

Giansante wakes up in the morning and leaves his Queens apartment to go to work as a scenic painter of holiday department-store windows. When he gets home in the evening, his studio time for personal painting has just begun; weekends are devoted to the same pursuit. Despite his hard work, he's struggling to find a gallery to represent him, to show and sell his paintings on a regular basis.

His friend Gerald Collings has it a little bit better. A few months ago, Collings walked into Envoy Gallery in Manhattan's Chelsea neighborhood and handed the gallery owner a portfolio of his work. He got a call back the next day. In the meantime, he still works as an art handler, wrapping and delivering other people's paintings to galleries in the city.

Daniel Hesidence, a longtime friend of both Giansante and Collings, has been still more fortunate. He found gallery representation with Feature, Inc. while still in graduate school in New York. After appearing in shows there for a few years, he was picked for an exhibit widely regarded as a bellwether in the city: the Greater New York 2005 show at P.S. 1, the contemporary art branch of the Museum of Modern Art.

Now his paintings have attracted the notice of British super-collector Charles Saatchi. Famous for championing the controversial Young British Artists of the '90s, Saatchi will debut an exhibit this fall at the Royal Academy of Arts in London called USA Today, of about 30 of his favorite emerging American artists. Hesidence will be in it.

You could say things are going pretty well for him, but Hesidence remains levelheaded and, like his friends, doesn't seem to get much sleep between commitments to a busy schedule.

For all three painters, it's been a long and arduous journey from their undergraduate alma mater — the University of Tampa — to where they are now. After graduating — Collings and Giansante in '97, Hesidence in '98 — each went on to a nationally recognized masters' degree program in painting. But talk to them and a theme emerges: Something about UT inspired or helped strengthen in each one the passion to be a professional artist. For a school largely off the map in terms of visual arts education, that's high praise.

The three return this week to open a group show of their paintings at the university's Scarfone/Hartley gallery. Talking to them, a picture emerges of the UT art department of the mid-'90s as a milieu that combined nurturing support from faculty with free rein to experiment.

For Giansante, that support came in the form of encouragement to pick up a paintbrush (despite plans to become an architect) from a faculty member who seemed to see something in him that even he couldn't quite see yet. For Collings, it was the freedom "to find your own path" — and the ability to find a teacher to bounce an idea off of at virtually all hours. When Hesidence came to check out the program prior to enrolling, he respected the fact that a certain professor gave him the straight scoop on the struggles of the artist's life and didn't sugarcoat it.

For each one, the faculty member who made a difference was Gilbert De Meza, a sculpture professor who took up the painting and drawing mantle when the art department faced cutbacks in those times. For years, De Meza even kept his studio at the university, which probably accounts for Collings' memory of him being around all the time. "I practically lived there," De Meza says with a laugh.

When he retires in 2007 after nearly 40 years of teaching at UT, his departure will mark, in some sense, the end of an era. De Meza plans to continue teaching during the summer but otherwise will spend his days working in a studio adjacent to the house he and his wife recently built in Riverside Heights. "I'm ready to find out if I'm an artist," he quipped during an interview.

De Meza sees the end of that era happening already at UT, where most art majors now concentrate on electronic media like graphic design rather than traditional fine arts. Still, students are required to take painting and drawing, which De Meza enjoys teaching at the introductory level where he can open minds to new experiences, much the same way he did with his three former students. "I've been so lucky to get as good a kid [at UT] as anyone in the country," he says of his students.

Through ongoing communication with the three painters and occasional studio visits in New York, where De Meza's son also lives, the idea of the group show emerged. Though the trio is close enough to constitute a surrogate family, each artist has developed his own unique voice, De Meza says.

That sense of kinship with difference permeates the show.

All three painters dig into the idea of corporeality but take distinct aesthetic channels. Giansante's giant abstract canvases — they're seriously huge at up to seven feet by eight feet — explore the interior of a vibrant candy-colored body or womb. Collings imbues with poignant beauty images that suggest figures, objects and landscapes overtaken by rot. And paintings by Hesidence exhibit a ghostly presence that owes a little something to Francis Bacon, and — as in the image shown here, in which a woman wears her gore like a fashion accessory — captures the ennui of the contemporary moment.

Beyond presenting some of the freshest painting Tampa's likely to see this year, the show offers the public an opportunity to sit in on a frank discussion between the three artists (in Friday's gallery talk) about surviving life as an emerging artist in New York.

Gil De Meza will be there — and he's bringing the impressionable young minds of his introductory painting class. Perhaps we'll be hearing their success stories someday soon. 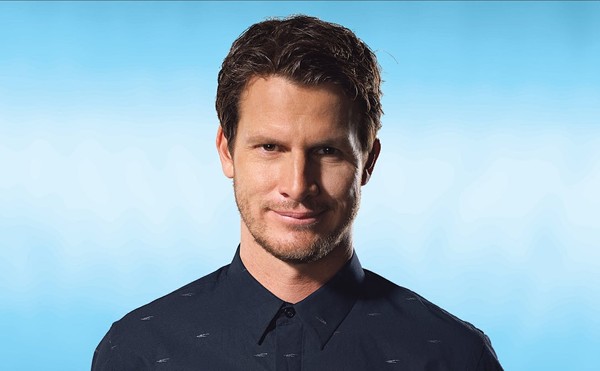