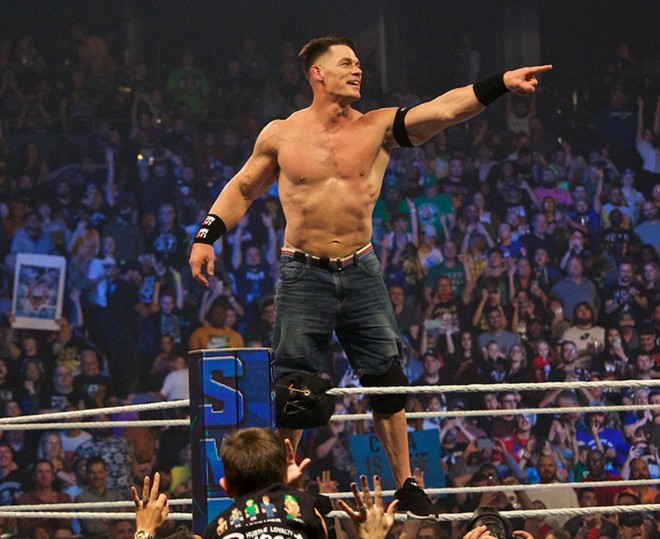 Max Steele
John Cena said Tampa's crowd was the reason why he returned to the WWE.
Tampa did, in fact, see him.

John Cena was greeted by a roaring Amalie Arena crowd as he entered the ring for the first time in over year, so it was only right that he gave his hometown fans what they came to see.

Cena and partner Kevin Owens conquered undisputed champion Roman Reigns and Sami Zayn in a tag team match to top off WWE's final "Friday Night Smackdown" of the year. The win marked Cena's first victory since leaving the stage after falling to Reigns in the main event of SummerSlam 2021.

Cena, who lives in Land O'Lakes, thanked the sold-out crowd for the love he's been shown over the years and admitted the support was the reason for his return.

"That's the type of noise I can feel in my heart," Cena said. "Thank you so much for giving me the greatest gift you ever could, and that is allowing me to step in this ring for 20 straight years. I've had one match, at least, every single year since I started in 2002. This year was the first year that that wasn't going to happen, until I found out that the last event of the year was right in my backyard here in Tampa Bay.

But before his big match, Cena met with a handful of young fans backstage, each who face battles of their own—including cerebral palsy, epilepsy, seizures and heart syndromes. The superstar holds the Guinness World Record for most Make-A-Wish wishes granted with over 650 since 2002. No other celebrity has fulfilled more than 400.

So while his motto deems "U Can't See Me," his desire to perform in front of the Tampa crowd and outreach within the community says otherwise.