Howl-O-Scream unveils 17 and up haunted house 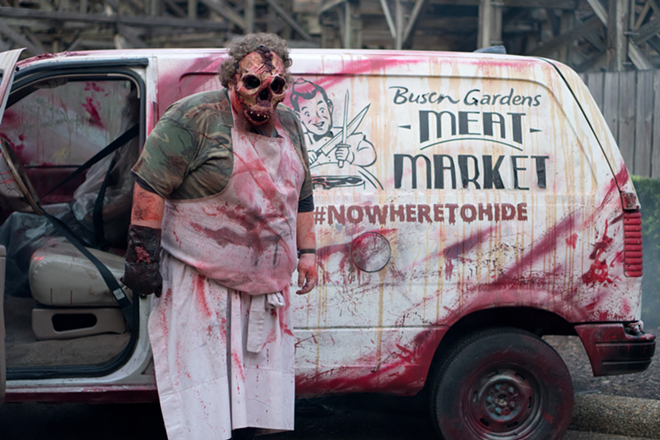 Ben DeWitt, Busch Gardens entertainment project manager and the mastermind behind Howl-O-Scream, the Tampa theme park’s long-running Halloween attraction, is not one to play it safe.

For the 18th annual iteration of Howl-O-Scream, DeWitt has doubled down on terror for attendees with two new haunted houses, Insomnia and Simon’s Slaughterhouse, which is the park’s first-ever attraction to be recommended only for guests aged 17 and up.

In addition, there are five new scare zones throughout the sprawling campus, including Maniac Midway, Camp DOA, Deadly Toys, Hell on Wheels and DÍa De Los Muertos, along with returning favorite, Meat Market, which also is now recommended for people 17 and older.

With Simon's Slaughterhouse, DeWitt said he and his creative team wanted to create what’s essentially a “Rated R zone,” although the park will not police thrill-seekers by checking IDs or try to keep out younger patrons.

“How do you keep up with what’s in movies and on TV? This is our solve for that,” DeWitt said. “We just want to make sure we’re doing it the right way [and still] push the envelope.”

Having braved Simon’s Slaughterhouse during Busch Gardens’ media night, I’m happy to report that the more mature-themed, gore-heavy attraction is a step in the right direction, even if it’s not a solid home run.

To get to Simon’s Slaughterhouse, you must first navigate the Meat Market scare zone, where audible instructions for curing a ham worm into your ears as you take in a brazen display of mutilation and kiosks overflowing with body parts. The main problem with Simon’s Slaughterhouse is twofold.

First, its central theme is overly complicated. Not only do you have a group of deranged hillbillies catching, cooking and eating people, but the titular Simon also is goading victims into playing a deadly variation of the popular children’s game, Simon Says. It’s a bit much, notwithstanding the fact that hillbilly cannibals have pretty much run their course in popular horror culture.

Second, the house itself is simply too dimly lit, with too much smoke pouring in, to properly see the gory details, which is why people go to haunted houses in the first place, or even follow the guided walkway from room to room.

I had more fun talking smack to the actors as they shouted things at me, like “You look good enough to eat!”

“Do you want to sop me up with a biscuit?” I asked in response.

The park’s first stab at a hard-R haunted attraction is an admirable effort that hopefully will continue to improve in future years.

According to DeWitt, the other new haunted house, Insomnia, was designed to be a “more cerebral” experience.

“Over in Simon’s, we want to right off the bat make your stomach churn,” he said, “whereas here we want to make your head turn.”

True to his word, Insomnia is probably the best new haunted house in many years at Howl-O-Scream, and ranks up there for me with Motel Hell, which also returns for 2018 along with past favorites The Black Spot, Death Water Bayou and Unearthed.

Insomnia gets under your skin immediately once you walk into the sparsely decorated, clinically cold lobby of a sleep institute. As you make your way through the house, characters repeatedly scream, “Stay awake!” and “No sleep!” while you pass nightmarish images culled from a litany of sleep terrors, including arachnophobia, nuclear Armageddon, monsters in the bed and under the bed, and more. Jennifer Ring
We've heard of pulling the wool over your eyes, but never the wool pulling out your insides.

Trust me when I say that “Don’t count the sheep” will forever be burned into your memory.

Insomnia features some very ambitious set designs, including one room where all the furniture has been flipped 90 degrees, making you feel light as air as you advance into a dark corridor punctuated by strobe effects toward a floating body.

For its scare zones, and to menace patrons across the park, Busch Gardens has doubled the number of actors on hand by adding 60 new people to roam the parking lot, the tram, the roller coasters and more. Jennifer Ring
As you wander through the Howl-O-Scream's scare zone, Deadly Toys, beware this Wascally Wabbit who you definitely don't want to mess with.

Several of the new scare zones are top-notch and guaranteed to elicit screams.

The best that we saw is Deadly Toys, which is basically Furries and Plushies Gone Mad, with actors in animal costumes, mostly bears and rabbits, chasing patrons with chainsaws, while young women dressed up as demented toy dolls lurk and wait. It’s silly yet unnerving, and definitely not for young children who still sleep with a stuffed animal to keep them company.

John W. Allman has spent more than 25 years as a professional journalist and writer, but he’s loved movies his entire life. Good movies, awful movies, movies that are so gloriously bad you can’t help but champion them. Since 2009, he has cultivated a review column and now a website dedicated to the genre films that often get overlooked and interviews with cult cinema favorites like George A. Romero, Bruce Campbell and Dee Wallace. Contact him at bloodviolenceandbabes.com, on Facebook or on Twitter

John W. Allman has spent more than 25 years as a professional journalist and writer, but he’s loved movies his entire life. Good movies, awful movies, movies that are so gloriously bad you can’t help but champion them. Since 2009, he has cultivated a review column and now a website dedicated to the genre films...
More
Scroll to read more Travel & Leisure articles
Join the Creative Loafing Tampa Bay Press Club