A headset that reads your brainwaves seems like something out of an episode of 'Black Mirror.' 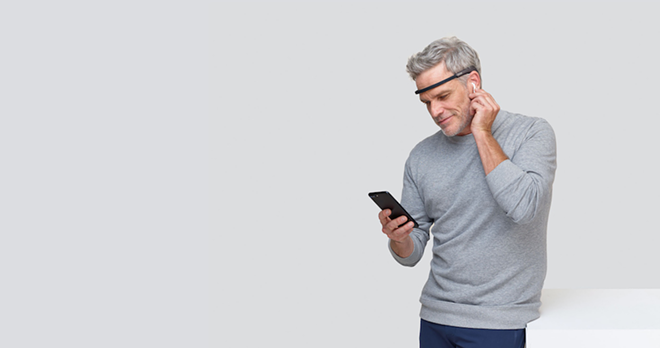 A headset that reads your brainwaves seems like something out of an episode of “Black Mirror.” Only this technology is real. And it has real implications.

The Muse headband came to my attention through an ad for a device that would supposedly answer the biggest meditation question of all time: “Am I doing this right?” Despite my general tendency to shy away from obsessive pursuits like competitive sports, hand sanitizers, and Fitbits, the idea of hacking my meditation practice was too tempting to resist.

The way these headsets work is simple. The band that slips across your forehead is fitted with electroencephalography (EEG) monitors. You wirelessly connect your headband to an app on your smartphone, which converts your sessions into data and creates a report that shows how active your brain was during meditation. But even during your sit, feedback is provided in the form or chirping bird sounds, indicating increases in brain activity. I couldn’t wait to get mine home and test it out. Thanks to the exact self-doubt that got me on a cushion in the first place, my skepticism soon grew.

Post-meditation reports were too positive; it didn’t matter that I’d been meditating for decades, the thing had to be rigged. So I tested my new gear, attempting a variety of activities while wearing it. To my surprise, the only suspicion it proved was that I’m better off doing crosswords before bed instead of reading, because reading kicked my brain into gear, whereas crossword puzzles did not. Apparently, it really was reading my brainwaves. But how exactly? The answer was a bit of a shocker.

The EEG technology behind the apparatus isn’t new. Back in 1780, Italian scientist Luigi Galvani manipulated a frog’s legs with electricity, showing that the brain controlled the nervous system with electrical impulses. It was reasoned that such impulses could be detected, but it took another 100 years before the British scientist Richard Canton recorded those signals in animals. And it wasn’t until 1924 that the German scientist Hans Berger created a machine that worked on humans, the electroencephalogram. From that day until now, with future fantastic predictions from the likes of Mark Zuckerberg, the field has had its skeptics.

Berger, the son of a doctor who ran a country asylum, set out to study astronomy. But he didn’t acclimate well to the big city, so he took a year off to serve in the military. During a routine training exercise, Berger’s horse threw him to the ground as the heavy artillery he’d been pulling moved toward him. At the last second the horse stopped; Berger suffered only the scare. The next day however, Berger got an urgent telegram from his family, asking after his health. He’d never received such a communication, in fact he hadn’t heard from his family in months. Later he learned the message was prompted by a premonition from his sister, sparking in Berger a deep belief in the power of the mind’s ability to transmit thoughts over distances — telepathy. Berger became obsessed with showing how measures of physical energy produced by the brain — heat and electricity — could be associated with feelings, emotions, and thoughts, especially telepathy. He switched into medicine and later joined the psychiatry department. For a time, he enjoyed academic and personal successes, publishing, marrying, and raising a family. But as the years wore on, no one expected a breakthrough from this brooding introvert.

In 1924, Berger was 51. The war was over, the Jazz Age was on, and scientific discovery was in its heyday, but Berger had little to show for his efforts. He was secretive and not well-liked by his peers. Though this was the year he recorded electrical activity in the human brain, he spent another five years testing the EEG before publishing his first paper demonstrating the technique. For any number of reasons — his tense relationship with the Nazi party (at times patsy, at other times a blockade), his personality, or his woo-woo beliefs — his finding were met with derision. It wasn’t until 1935 that his work was verified by other scientists. Since then, uses for EEG have mushroomed. EEG-enabled equipment is used to diagnose conditions ranging from headaches to dementia and epilepsy. It’s also been used to detect abnormal brain wave patterns after injury, tumor, or stroke. And now, with the way the technology has been developed, the field has come full circle to Berger’s original hypothesis.

In the 1970s, a group of researchers at UCLA hypothesized that the brain’s electrically-charged neural pathways could power external mechanisms. Their idea was first demonstrated in 1977, with a noninvasive EEG controlling a cursor-like object on a screen. This new application, known as brain-computer interface (BCI), developed rapidly. By the ‘80s, EEG feedback could control a robot arm. By the ‘90s, the first tests of neuroprosthetic devices (think eyeball tracking to type) were used on humans. Today, BCI has been applied across fields ranging from gaming to more independent functioning for people with disabilities. But the data collection is not without risk.

In 2012, a team of security researchers from Oxford, UC Berkeley, and the University of Geneva deduced personal security information using data collected from EEG readings. Of course, their experiments were designed specifically to evoke the information, and their findings haven’t been replicated in the real world. But that doesn’t mean it never will be.

“Everything is hackable,” according to Gary Ellison, a cybersecurity expert who’s worked with leading companies in Silicon Valley since the ‘90s. When asked if it might be possible to retroactively glean data from existing brainwaves, Ellison gives the same response. So I contacted Muse to find out what they were doing to prevent breaches.

“We’re a long way from being able to invade someone’s privacy,” says Graeme Moffat, who spoke to me as the lead scientist from Interaxon, the company that owns Muse. He’s since become a senior fellow at the University of Toronto’s school of public policy, perhaps reflecting our conversation about ethical standards. Because despite reassurances about security, he also explained, “We’re not at the level yet where people can even anticipate what to worry about.”

Moffat then went on to tell me how the Chinese railway system is currently experimenting with monitoring its workers using EEG data. What standards for productivity and paying attention might result from that? Pointing out that China has different standards for privacy, Moffat went on to say that, “EEG is just one step in a continuum of monitoring individuals. Where it starts to get concerning is in the ethical implications of continuously monitoring individuals.”

My concerns weren’t exactly assuaged. There is an International Neuroethics Society, but what power will they wield against the growing BCI market? In 2017, Stanford released a study demonstrating BCI’s potential for growth in the medical field, while at the same time headlines about the mind-reading team at Facebook have abounded; where researchers announced recently that they can translate brain activity into words. Not to be left behind, Elon Musk said that his startup, Neuralink, aims to “achieve a symbiosis between man and artificial intelligence,” though this neural netting implant doesn’t currently use EEG readings.

One thing is sure, as the field develops, so, too, will the consumer applications. It’s just a matter of time before malicious developers surface, and thought will be common among our cybersecurity concerns. Considering the level of invasion already possible through the average smartphone, it’s safe to say we’re unprepared.