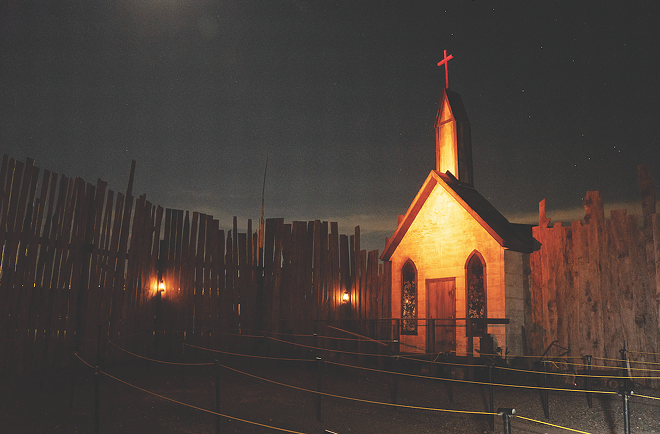 Photo by JENNIFER RING
One of the Bay area’s most convincing haunted attractions feels a little too real.

Diana, Mystic of the Dark, points the EMF meter into the pitch black as we walk slowly into the woods. “I feel a lady back here,” she says, “a lady being dragged.”

She’s sensed this woman for more than an hour, even before we arrived. What she sensed told her this woman was not from Dade City, but she knew the area where we now stand. Now, Diana says she can hear her crying and calling out.

Most people likely would avoid creating a situation that could easily turn into a real-life horror movie. Instead, I’m at Scream-A-Geddon, the five-year-old Pasco Halloween attraction, to talk to park employees who have experienced things they cannot explain; paranormal events including full-body shadow manifestations, both when the attraction was closed and while it was open. I’ve brought Diana, a Tampa-based intuitive-medium with more than 30 years of experience. I believe she’s the real deal, and if anybody can help me survive an angry spirit encounter, it’s her. After all, nothing ever truly dies. The energy that we leave behind remains and that energy feels particularly strong at Scream-A-Geddon. Diana stops suddenly, and asks: “Is anybody with us?”

The EMF meter in her hand flashes, a burst of bright lights. The message is clear: We are not alone. It makes sense that Scream-A-Geddon could be an actual ‘haunted’ haunted attraction. The expansive park’s property sits on St. Joe Road, less than two miles from The Bradley Massacre, a bloody footnote in Pasco history. A marker, erected in 1979, reads as follows: “Near this spot on May 14, 1856, a Seminole war party attacked the home of an early settler, Capt. Robert Duke Bradley of the Florida Foot Volunteers. Two of the Bradley children were killed before the Indians withdrew. This was the last such attack on a settler’s homestead east of the Mississippi.” (Editor’s note: We know today it’s probable that this “attack” was a result of ongoing attacks on the Seminole relocated to the area as part of the Trail of Tears, but that actually makes things even more horrible.)

No one knows exactly where the Bradley’s homestead was, but Geof Kledzik, Scream-A-Geddon’s General Manager, believes it sat close to the haunt’s midway, near a small lake in a clearing not open to patrons. Kledzik heard stories about the massacre, and about the Ku Klux Klan dumping bodies in that lake decades ago. While he hasn’t seen any evidence of paranormal activity himself, most employees report something creepy.

“There were some people who come here and get the heebie-jeebies and are just like, ‘Nope, can’t be a part of this anymore,’” he says. At least six people confirmed they experienced a possibly paranormal encounter after starting work at Scream-A-Geddon. Makeup manager Emily Couch says she’s seen shadow figures, a ghostly cowboy and little creatures she calls "boggarts," a sort of mischievous household spirit. The shadow figures hang out near the lake. The first time she saw them, they were “holding hands in a ring.” The next year, she says, “the ring of people went from three people to five people and multiple groups of these shadow figures holding hands in a circle.”

Another time she saw a figure on a wooded path that resembled a cowboy standing in a gunfighter’s stance, about to draw his weapon. She thought it was another employee, playing around.

“When I got closer, I realized that the figure was actually see-through. This thing starts rushing, running at me. As soon as the shadow hit the LED light, it vanished. I was like, what the hell did I just experience?” she says, “I actually left early that night.”

Amber Johnson, another four-year employee, also has seen shadow figures, including one night while carrying supplies.

“I was walking the path, I seen this shadow running at me,” she says. “I jumped in the bushes. I was shaking. I was terrified.”

Johnson also has heard about bodies dumped in the lake, one from a man who claimed he grew up on the land whose grandfather told him he’d struck a deal with local KKK members.

“That’s the shadow people you’ll be seeing,” he told her. The only problem?

“I never told him the story about the shadow people I saw,” she says.

Employees say the grounds have three epicenters for activity. The area near “Zombie Paintball Assault,” the forest surrounding “Dead Woods,” and “Demon’s Revenge,” the newest haunted house. Two actors at “Demon’s Revenge” in 2018 felt such a strong presence there that they asked if they could perform a cleansing ritual.

“We said maybe a cleansing with sage would help,” she continues. “It did for a little while. We know there’s a lot on that property that’s happened. We just felt there was an over-abundance at that time.”

Fenton believes the spirit still lurks inside “Revenge,” but it’s one of many on-site spirits he’s noticed.

Costume manager Heather Spivey, an employee since 2017, says the energy at the park grows stronger each year. She believes she’s seen the spirits of the slain Bradley children, a cowboy, several skull-faced creatures and even a few trolls.

“Some feel threatening and you feel really sick,” she says. “You also get ones that feel neutral, no particular feeling, good or bad.”

Our mystic believes the Scream-A-Geddon answer site is haunted by two types of ghosts: Shadow figures who lurk near the paintball trail, felt non-threatening, but over by Dead Woods, she felt “very oppressive and dark” energy, almost “like the shadows wanted to hold you there.”

Tempted to seek out answers for yourself? Diana has a warning for the curious: “If you are not sure if it’s a good or bad spirit/energy, don’t try to mess or engage it,” she said. “Remember, they were here first.”

John W. Allman has spent more than 25 years as a professional journalist and writer, but he’s loved movies his entire life. Good movies, awful movies, movies that are so gloriously bad you can’t help but champion them. Since 2009, he has cultivated a review column and now a website dedicated to the genre films...
More
Scroll to read more Travel & Leisure articles
Join the Creative Loafing Tampa Bay Press Club