Hyde Park began as a community with heart, grit and ambition.


As we mourn the loss of America’s middle class, we can look back to Tampa in the early 20th-century, when the now upscale Hyde Park was a model community of middle-income living.
Hyde Park is Tampa’s first west-of-the-River neighborhood, where public transit was a way of life and there was no need to cross the Lafayette Street Bridge (now the Kennedy Boulevard Bridge). Most professionals worked an easy streetcar commute away.

“Just think about life without the expense of a car and the problem of finding parking downtown,” says the eloquent and animated Maureen Patrick, former president and current board member of the Tampa Historical Society. “For that ease, Hyde Parkers had Peter O. Knight to thank, since he kept the streetcar system running until 1946 — with fares at just a nickel.”

The Historical Society owns and operates the Peter O. Knight House at 245 S. Hyde Park Ave. a house once inhabited by the lawyer, politician, financier and airport namesake who founded TECO and a handful of other companies still in operation today. The house serves as a mini-museum of early Hyde Park life, along with providing a glimpse of the day-to-day routine of one of Tampa’s most important magnates.

Patrick leads tours of historic Hyde Park homes, and one of her favorite stops is Bungalow Terrace at Swann and Rome avenues, where a sidewalk — not a road — divides a cluster of small houses. The quaint complex of 19 residences was inspired by small California homes and created to instill a sense of community.

“Hard to ignore your neighbors when they’re just a few feet away from you,” Patrick quipped, adding that a bougainvillea vine once grew over a central trellis, but became too heavy to maintain. Alfred Swann and Eugene Holtsinger developed Bungalow Terrace in 1913 on what was then Morrison Grove.

“Today, the necessity for an automobile makes Bungalow Terrace awkward,” Patrick said. “There’s hardly any parking, but [in the 1920s] the streetcar was only a few steps away.” 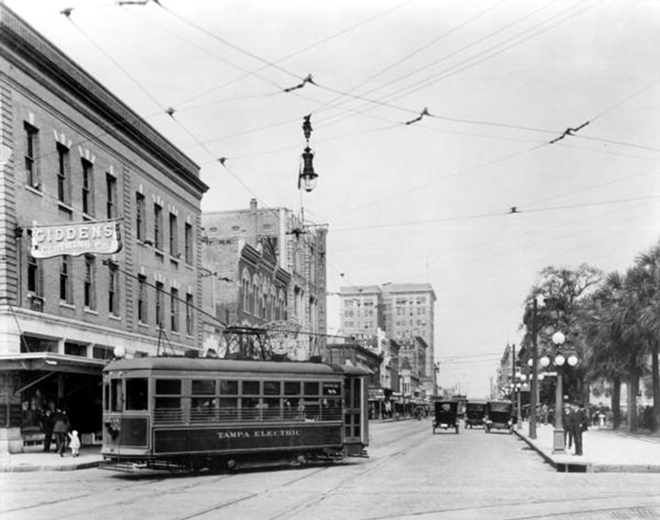 TAMPA PRESERVATION
Hyde Park's beginnings
It was the age of neighborhood stores — “and I don’t mean upmarket boutiques,” Patrick clarifies. “For decades,
Putney’s Pharmacy, at Watrous and Rome, for example, was the go-to place for medicines, a newspaper or a double-decker sundae. Burt’s Hardware, where my grandpa was a sales clerk, was up on Howard Avenue.”

Patrick tosses off interesting tidbits of Hyde Park trivia: “Most people don’t know it, but John Gorrie invented air conditioning,” she says of the namesake of the 1889 brick Hyde Park school still in operation today. “We in Central Florida bless his name every summer day.”

The Friday Morning Musicale is another of Patrick’s favorites. The theater at 809 Horatio St. is a beautifully restored Mediterranean Revival 1920s building, from an era when theaters — and their regular programs and events — were central to the social/cultural life of a community.

“Now, it’s one of the very few historic proscenium theaters left in Tampa or, for that matter, the nation. It housed concerts by many famous artistes in its heyday, and was used for bond-selling concerts in World War II.” Patrick leads the venue’s Summer Stars Theater Camps, and has been teaching the children’s performance program at the Musicale for 31 years — and it’s still going strong.

Of course, anyone who’s merited a street name has a story.“Most of the folks who had early Tampa thoroughfares named after them, including Hyde Park streets, had stories exemplifying the rough-and-ready-on-the-ox-team grit that we think of when we think ‘pioneers,’” Patrick said.

John Jackson (namesake of Jackson Street) survived the Seminole Wars, yellow fever and the Hurricane of ’48 in order to produce the first surveys of the area, and William Ashley (Ashley Street) was one of the tiny handful of educated men who made up the first City Council.

“Harry J. Watrous made money, and in the age when Hyde Park was built, making money was the most illustrious goal and adventure.”

She adds that Watrous, born in 1866 to a couple who were the prototypical “ox-team settlers” in rural Hillsborough County, was an early graduate of the East Florida Seminary, now University of Florida, an orange grower who was put out of business by the brutal freeze of 1895.

“Many people gave up on Florida after events like that — hurricanes, freezes, malaria outbreaks — but Watrous changed gears. He came to Tampa and joined the original team of Hendry & Knight Company [no relation to Peter O. Knight]. Watrous prospered, mostly in the insurance end of the business, and for years ran a subsidiary mortgage business, Pallardy-Watrous Mortgage Company. Watrous was married in 1892 to Tampan Nannie Givens. The couple had five children, all of whom did well in Tampa business and civic affairs. Watrous’ name is a perfect one to go on a Hyde Park street because he is a perfect exemplar of what Hyde Park was all about: upward mobility.”

From Ballast Point to the Moon: A Jules Verne Tea The Tampa Historical Society invites you to a costume party celebration at the Peter O. Knight House. Verne is connected to Tampa history — the Ballast Point Park in Tampa was originally named Jules Verne Park in recognition of the author’s references to "Tampa Town" in his novel From the Earth to the Moon. Sat., May 18, 5 p.m. 245 S. Hyde Park Ave., Tampa. 813-259-1111.

Open House and Victorian Tea at the Peter O. Knight House Kick off Tampa’s Archives Awareness Week with a visit to the honeymoon home of one of Tampa’s most historic figures. On display are photographs, furniture and artifacts from the Tampa Historical Society collection. July 13, 4-6 p.m. 245 S. Hyde Park Ave., Tampa. 813- 259-1111.