I Do! I Do!: Wholly matrimony

Some of it is pure cornball, but Tampa Rep’s latest production is well worth the commitment. 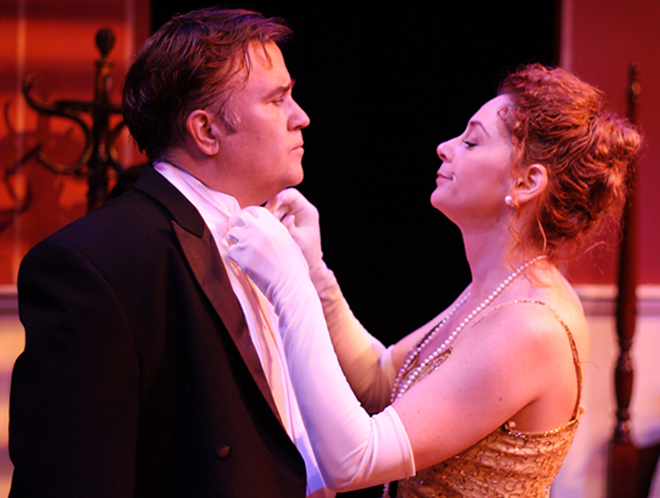 Desiree Fantal
MARRIED TO IT: Ned Averill-Snell and Emilia Sargent are simply lovable in I Do! I Do!

If you can get past its musty opening scenes, you’ll find that I Do! I Do! isn’t as old-fashioned as all that, and may even make marriage seem an attractive institution. Anyway, how can you not be pleased by Emilia Sargent and Ned Averill-Snell, she of the stunning voice and flaming red hair, he of the charming good looks and always palpable good intentions. Dancing and singing their way across an HCC-Ybor stage in a Tampa Repertory Theatre production, these two are so appealing, they could make Ted Cruz break down and beg for Obamacare, and Mitch McConnell, in tears, speak out against income inequality. Is there something Norman Rockwellish in the story I Do! tells? Yes, but with the divorce rate at 50 percent, a vote for marriage is rather refreshing, and even a little inspirational. Sure, I Do! is sentimental, and pre-Gloria, pre-Hillary. But not every look at wedlock can be The Dance of Death. And isn’t it time someone spoke up for love that goes the distance?

About those first scenes: the year is 1900 or so, and Michael and Agnes are sharing their first night together. He’s hot to trot; but she makes it known that she’s never seen a man naked before, and isn’t terribly interested in starting now. (This is so pre-Miley Cyrus.) Somehow they get past it, and next thing you know she’s pregnant, and declaring that “All at once, instead of one, I am two.” But he’s got the labor pains (why miss a cliché?), and she has to nurse him before giving birth to a little boy. Who’s followed by a girl. Who’s followed by the observation that “Love is what keeps you hummin’/While all the bills keep comin’.” And bills are indeed the issue when he finds that all the money he’s making as a successful novelist is being exhausted by a spendthrift wife who never saw a dress she didn’t like — or a blouse or a hat. Now tempers begin to fray. He “chews in his sleep,” she says, and she finds it irritating. She serves him Russian dressing, he says, which he “happens to detest.” Can these terribly outdated, embarrassing stereotypes be saved? Or are they headed for a break?

And then, strange to relate, the play begins to work. It starts when he gets so pleased with his literary success, he becomes pompous and arrogant — and her overspending becomes a protest against his narcissism. Then he admits to an adultery — and there’s nothing hackneyed at all about the complicated emotions he and she feel as they try to work through it. If Sargent and Averill-Snell were endearing even at first, now they’re much more ingratiating as their problems hit home. Raising children with minds and bad habits of their own, trying to find time for themselves when the kids are so demanding, despising the man their daughter is marrying, finding themselves facing an empty nest — all these situations are as potentially relevant to the theatergoers watching them as the first scenes were trite and archaic. Now the museum piece is forgotten and we’re in the presence of live theater. And now Sargent and Averill-Snell can show their considerable stuff.

Which they do. Sargent, we see, doesn’t just have a terrific singing voice; she’s also remarkably talented at showing a wide range of emotions, some dominant, some recessive, some visible just for a moment on her changing, expressive face. Averill-Snell, it becomes apparent, isn’t just suave and charismatic: he also has a wonderful ability to parade his flaws as if they were virtues, to find all the humor in his character’s vanity, and to exude love like the merest puppy. On Keith Arsenault’s fine bedroom set, and as directed by Connie LaMarca-Frankel, the two performers present themselves with the utmost professionalism, not missing a a grimace or a grin. They’re winningly choreographed by Crystal Solana Bryan, and their many costumes, by Cody K. Lorich, could hardly be better. The dozen-and-a-half songs are successful too; Tom Jones’ lyrics and Harvey Schmidt’s music are catchy and inventive. And there are several lovely duets.

So what can you do? The way to the good stuff is through the bad stuff, and it just won’t do to arrive late. Buy a ticket and wait out the first antique moments. Hold your breath. Do multiplication tables.

I promise things’ll get better. And when they do, you’ll be glad you stayed.