In exceptional Company with mad Theatre

Despite being set in the 1970s, Stephen Sondheim's Company is still relevant today.

M.A.D. Theatre at the Shimberg

If you’ve ever been in a relationship, you will see yourself in mad Theatre of Tampa’s season-ender, Company . Unlike other musicals, Stephen Sondheim shatters the conventions of a plot-driven musical. Showcasing the book by George Furth, Sondheim's songs aren’t used to move the story forward; rather, they masterfully give us vignettes of married life in no particular order, a proverbial peek behind the curtain, circa 1970.
click to enlarge 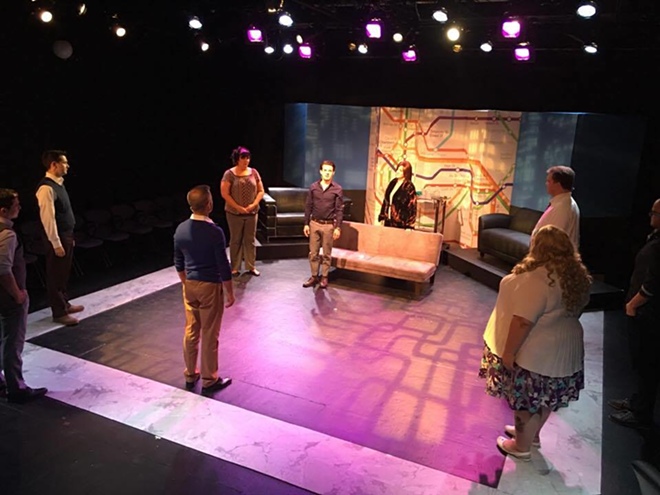 mad Theatre of Tampa
Married friends are worried about their single friend Bobby on the eve of his 35th birthday.

At the center of the story is a single birthday boy named Bobby attempting to blow out candles on his cake and make a wish (or not). His married friends are worried about his bachelorhood on his 35th birthday.

Through the talents of directors Donald B. Holt and Anthony Paul Gilkinson, we are presented with a series of non-linear vignettes revealing the lives of five couples and Robert's three girlfriends through a year in New York. His well-meaning friends want him to be married, yet when together, reveal the difficulties that marriage entails. Do as I say, not as I do falls into play many times in the performance.

With patrons sitting on all three sides of the stage in Shimberg Playhouse, a minimalist set of a fold-out screen that features the New York subway line and skyline, couches on all sides of the stage and a main futon that the cast changes seamlessly for each scene, Dwayne A. Cline’s set and Anthony Vito’s lighting is perfect.

From the overture that will be forever stuck in your head, "Bobby, Bobby, Bobby baby, Robby, Robert darling . . ." to Bobby’s awakening “Being Alive,” the show zig and zags through time, each actor bringing something special to the stage that is interesting to watch.

Ricky Marenda’s doted-upon, fretted-about Bobby is in the simplest terms, incredible. The man looks like he came out of a GQ Magazine and has the pipes and acting chops to match. He manages to be both distant and still likeable, the third wheel watching his friends stage a karate competition, smoke pot, get divorced, get married and embarrass a spouse with bad dancing in a nightclub.

Despite a mic glitch, I enjoyed the show in its entirety and I was amused at the audience’ reaction to certain performances. Girlfriends and wives were jabbing their partners during scenes and mouthing “my God, that’s so us.”

A couple in a troubled marriage — Bill Rolon as Harry, a recovering alcoholic who pours Bobby a drink and DeAnna McMahan as Sarah, an overeater who made Bobby a plate of brownies, henpeck each other and then worry about Bobby being alone. Harry tells his wife to shows Bobby some karate moves she’s been learning. When the married couple challenge each other to a karate demonstration and neither refuse to let go, the stubbornness mirrors their relationship. Yet at the scene’s end, Sarah’s “I love you” to her husband with her mouth filled with chocolate brownie was completely relatable. Rolon’s “Sorry Grateful” joined by other male cast members was exceptional.

Jen Martin and Justin Batten were perfect as the happily-divorced couple Peter and Susan who still live together to raise their family.

I adored the actress Lisa Prieto as the neurotic bride Amy who is sure she shouldn’t get married. Complimented by and contrasted against Martin’s beautiful soprano, Lisa’s show-stopper, machine-gun, tongue-twisting, not-take-a-breath delivery of “Not Getting Married Today” was hilarious, her break-up with Paul (Peter A. Belk) heart-breaking. I think many in the audience wanted to comfort Paul when Amy said she didn’t love him enough. His eyes said it all.

A standing ovation is due for Jenny and David, played by Heather Lynn Mendoza and R. James Faurote. David lying wasted, halfway on, halfway off the couch, Jenny’s introduction to marijuana and her denial that she’s even getting high until she is was the funniest vignette in the entire production. I laughed out loud when Bobby and David egged on Jenny — who never does — to curse.

As Bobby’s girlfriends, Lindsay Yarbrough beautifully plays the daft yet delightful April who leaves Bobby’s bed singing about indecision and regret in “Barcelona” and Jessica Moraton gives a touching, standout performance as Marta. She's the young, artsy newcomer to New York and her ode to the busy nonstop city, "Another Hundred People," is a highlight. You feel for Kathy, Bobby’s true love, played by Kelsey Ehrensberger when she reveals that she’s getting married to someone else. The trio’s zombie scene was funny and sad at the same time.

mad Theatre of Tampa
Married friends dote on and fret over their single friend Bobby on his 35th birthday.

With outstanding choreography by Gilkinson, in this production, including a tug of war with Bobby in the middle, every actor gets an opportunity to shine. Despite the musical being set 40 years ago, Company reveals the loneliness of modern urban life, where everyone is talking, but no one truly communicates.