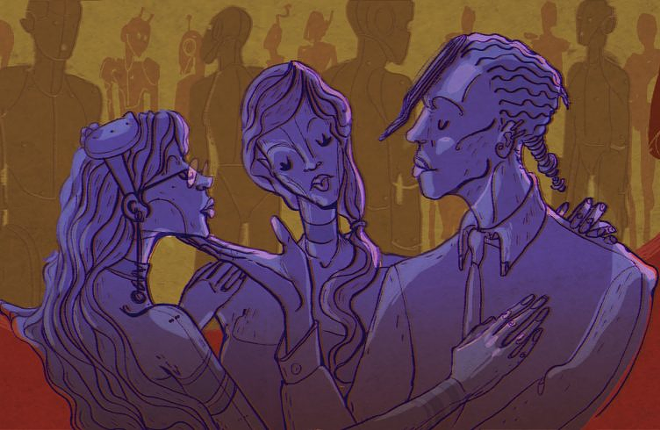 Whether they're telling one long-form tale or tackling an issue from many sides, the podcasts listed here serve up the best in storytelling today. Mercifully, there are no lessons to be learned, just narratives that take listeners to other worlds. And let's face it — when I can lose myself in somebody else's story, I get relief from my own drama. Notably, this list doesn't include The Moth or This American Life, both excellent programs, yet not substantially different from their radio offerings. But enough about what didn't make the grade. On to what did. This is a flat-out tribute, because it's a parenting podcast. I'm not even a parent and I love this show.

I first heard about this podcast through a series of episodes called "The Accidental Gay Parents." I was looking for background on what it's like to be transgender, and came across mention of this show. I listened, and was hooked. It's more about familial relationships in the modern era than simply parenting. I only wish they'd get rid of the annoying toddler squeaking in response to "Can you say advertising?" (Though it's a great cue to fast-forward.)

I didn't like Serial. There. I said it. It's relevant here, because this show comes from the same producers, so I was skeptical and it took me a long while to listen, despite many raves. Turns out, they were well-deserved. Better than its predecessor, S-Town builds the story around characters without losing the narrative thread. Also, unlike the previous show, I don't have frustratingly unanswered questions after each show. But I do finish each one eager to see where the hell the saga is going.

S-Town is one long-form tale, told over seven episodes. The action gets underway when the flawed hero in this tale decides to call the producer and make wild accusations about others in his own "Shittown" of Woodstock, AL. You won't believe what these folks get up to.

Dan Savage's new podcast made the list despite being only three episodes in; it's that good. This show tackles a different topic within the broad "sex and relationships" spectrum. Based on his column, I was expecting a lot more Savage. What he does is something much better, which is to take existing threads in the ether, and weave them around a particular topic. Alongside full-length stories told at storytelling shows (so far he's also recorded one just for the show), he adds musicians, comics and a small dose of his own opinion. In this way you get a well-produced time capsule of the day's hottest topics. And since it's only a half-hour long, it's easier to take the whole thing down at once.

Courtesy of Memory Motel
Clint Buffington (right) examines a message found in a bottle for episode 14. On his left is Craig, who sent the message 18 years earlier, but didn't want his last name used.

Full disclosure: I worked with Terence Mickey at The Moth. If anything, that means this show had to be that much better to make this list. It was.

The overarching theme of this podcast is memory. But all stories are remembered, no? The way this works is that the stories told are not from a single teller; rather, they're revealed through interviews and reporting. To conform to the theme while recounting wildly different stories — the show has covered everything from a man who finds messages in bottles, to the first woman diagnosed with Stockholm syndrome, to exonerated convicts — Mickey taps sources ranging from neuroscientists to his own mom.

If that sounds convoluted, then here's what you need to know about this show: Mickey's a storytelling pro who's an expert at presenting a narrative, all the while taking listeners on an emotional journey. All. The. Feels. In about a half hour.

For the sheer richness of stories, L+R is the best out there. This show has been bringing emotionally complex tales and making them digestible over headphones for years. The episode "A Girl of Ivory" is the perfect example of what I'm describing. For the first half of the show you think it's a story about an unusual polyamorous situation, then you learn there's much more to the story. Nothing is presented as questionable, the show merely gives the teller a platform for sharing. And they do it without asking for the listener’s approval. The end result is true connection, a new understanding of diverse ways of being free of judgment, a much-needed balm in these times.

If you find these shows make you want to get more storytelling in your life, check out True Stories the second Wednesday of every month, run by Kirchner and sponsored by Keep St. Pete Lit. Lisa L. Kirchner is the author of the critically acclaimed Hello American Lady Creature: What I Learned as a Woman in Qatar. Her work has appeared in book anthologies, magazines & newspapers including The Washington Post and Salon.com. Celebrity interviews include: Amy Sedaris, Xavier Dolan and John Sayles. At one time she was simultaneously the dating columnist for an alternative newsweekly, bridal editor for a society rag and the religion reporter for a gay and lesbian newspaper. More at lisalkirchner.com.