'Joker' is a brilliant depiction of madness, and a dangerous call to arms

How do you champion a movie that represents the pinnacle of comic book cinema when its very existence feels like a genuine cause for concern? To say the critic’s screening of Joker was extraordinary would be a gross understatement.

But this is the world we now live in, especially following the 2012 attack in Aurora, Colorado during the premiere of The Dark Knight Rises that left 12 people dead.

Joker is a harrowing, wholly bonkers new take on Gotham’s clown prince of crime. It’s also an unexpectedly thought-provoking rumination on mental illness and the erosion of civility in a society that continues to grow in favor of the haves while shitting all over the have-nots.

Joaquin Phoenix very well might be the second actor to take home Oscar gold for portraying the Joker. Make no mistake, Phoenix’s bravado performance is astounding. The actor, his skin stretched parchment-thin over his boney frame, is utterly hypnotic in this role. And his odd, unnerving, staccato cackle, which bursts forth from his gaunt visage, whenever his Arthur Fleck is anxious, uncomfortable or euphoric, is downright chilling.

Joker is the best film yet to be produced by since DC Entertainment since it and Marvel Studios entered the movie business more than 10 years ago. Seriously, this is comic book cinema at its most effective and thrilling.

But it’s also damned difficult to champion Joker, and not because of its sporadic, brutal violence.

Joker is the first film in my lifetime that I’ve watched and felt queasy about enjoying (and I’ve watched a lot of deeply disturbed movies from A Serbian Film to the entire Human Centipede franchise).

It plays like a call to arms for an underground network of sleeper agents to rise up and wreak havoc on our already fragile democracy. And it exhibits zero remorse in doing so.

Throughout its two-hour runtime, Joker presents the fictional Gotham as a mirror image of our imploding society today.

The film depicts Fleck’s mandatory therapy as a lone thread keeping his volatile personality disorder and unstated mental illness in check. And it shows Fleck’s accelerated downward spiral once funding for that government program is taken away, and he no longer can afford his seven different psychotropic medications.

It introduces Thomas Wayne (Brett Cullen), father of young Bruce (aka Batman), in a light that hues much closer to today’s billionaire oligarchs than the benevolent shepherd of DC Comics’ canon.

In a chilling speech teasing a possible bid to be Gotham’s mayor, Wayne denounces a recent subway attack by a clown on three six-figure accountants, and makes a pointed statement about the uneven scales of power and influence.

“Those with money who have made it will always look at those with nothing as clowns,” he says.

The problem is, Wayne presents himself as part of the former, which immediately makes him an unsympathetic target once Gotham dissolves into chaos as a result of Fleck’s criminal ascension. 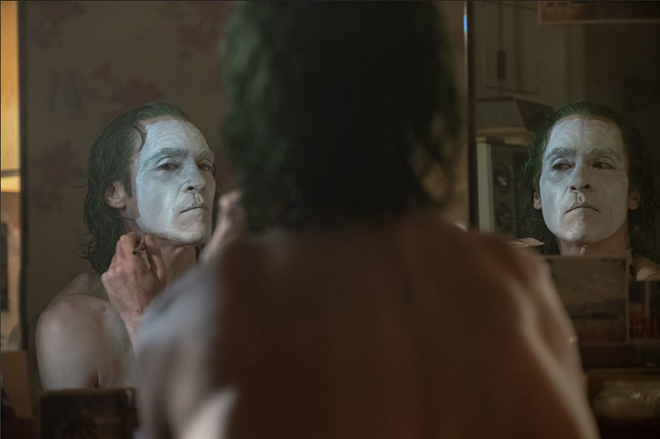 Joker instead portrays Fleck as a disturbed, yet sympathetic, schlub through a series of sly fantasy sequences that are damn near impossible to detect as being a false narrative shown through the prism of a distorted reality.

Fleck endures a heap of abuse, both physical and psychological, for the film’s first 90 minutes. He’s beaten senseless on several occasions. He discovers that his mother, Penny (Frances Conroy, American Horror Story), lied to him about the cause of his mental illness and about his birthright. He gets fired from his job as a clown and mocked by a local television celebrity (Robert De Niro) for attempting to transition into a standup comedian.

Joker is a brutal indictment of the ways that society castigates and isolates the people who are most susceptible to violence, backing them into a corner from which there is no choice but to attack.

And when Fleck finally flips that switch, the stunning explosion of aggression that he unleashes gives way to a groundswell. A small army takes to the street in protest, each dissenter adorned with a leering clown’s mask, shouting, “Kill the rich.” It’s an eerie reminder of how quickly organized protests can devolve into anarchy, whether as a spectacle of hate in Charlottesville or an urgent bid for democracy in Hong Kong.

In that light, how do you champion a movie like Joker? How do you analyze its merits as a crowning cinematic achievement when it is so clearly steeped in the blood and agitation of our current cultural crisis?

As unsettling as it felt to walk through a battalion of armed security just to watch a movie, I felt even more of a chill when the credits rolled and the audience broke into sustained applause.

Joker is more than just a comic book movie.

It’s a coiled, venomous serpent set to strike America across thousands of theaters where millions of people will revel in its nihilistic zeal.

It’s not the movie-going masses that worry me. It’s the handful of real-life Arthur Flecks watching and feeling emboldened that should be cause for concern.