Jr. dropped 30 on Orlando the other night. 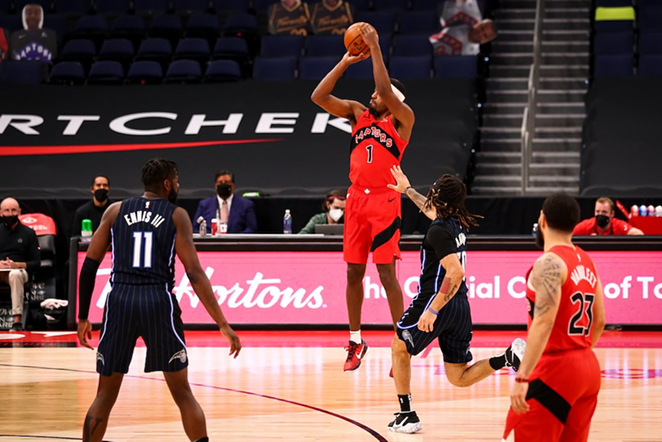 Paul Watson, Jr. made his presence on the Raptors known last Friday by dropping 30 points in a win against the struggling Orlando Magic.

Despite sharing a name with an environmental activist who is currently wanted by the Costa Rican government for “intervening to stop a Costa Rican shipping vessel,” the Raptors’ shooting guard is trying to make a name for himself as a sharpshooter at the NBA level, with 24 of the 30 points scored against the Magic coming from behind the arc.

The 26-year-old out of Fresno State went undrafted in the 2017 draft, following a four-year college career that was filled with ups and downs. He won Mountain West Conference Freshman of the Year in 2014, but ended up suffering an ankle injury his junior year that limited his ability to participate in Fresno State’s run to the NCAA Tournament, the first time the team had made it to the Big Dance since 2001.

Watson Jr. went overseas following his unsuccessful attempt at making an NBA team, playing in Germany for BG Göttingen in 2017. He eventually made his way back to America, playing in the G-League for the Westchester Knicks and Raptors 905 before earning a 10-day contract for the Atlanta Hawks. After being released by Atlanta following the expiration of the 10-day contract, he latched on with the Raptors with a two-way deal.

After dropping 22 points and six rebounds in the bubble this past August during a game against the Nuggets, the Raptors gave Watson Jr. a full NBA deal that allowed him to develop with the NBA team in that famous Raptors way.

Watson, Jr. is yet another example of the Raptors scouting and development department doing its job, which is something that the team will need to continue to see with the Raptors’ struggles this season. While Watson may not be a core part of the Raptors’ future plans, he could be dangled as a trade piece at some point if he continues to show that he has that much-coveted ability to stretch the floor, or he could continue to provide the Raptors some solid minutes off the bench.