He goes back to the well and finds it empty with his latest haunted house thriller.

Universal Pictures
Kevin Bacon learns the hard way to never, ever rent a house where the only art inside is a creepy portrait of the house.

Every so often a movie gets released with a title that’s tailor-made for pun-y ridicule.

You Should Have Left
1 out of 5 stars
Run Time: 93 minutes
Now available on DVD and streaming

But what’s more interesting about this project isn’t how bad it is, but the missed opportunity it represents for Bacon and his writer/director David Koepp.

Longtime horror fans should know this pairing well. They collaborated 21 years ago on the far superior haunted house thriller, “Stir of Echoes.”

But whereas “Echoes” was a box office disappointment (It was released exactly a month after “The Sixth Sense”), the film found considerable love as a cult classic because of how genuinely creepy and memorable it is.

How nice would it have been for Koepp and Bacon to reunite more than two decades later and deliver a proper bookend flick, one that played with expectations and understood overused horror tropes and did something surprising at a time when fans are stuck at home and starved for quality entertainment.

“You Should Have Left” starts off strong with young Ella (Avery Essex) roused from slumber by a strange noise. She leans forward in bed, but can’t see anything. “Goddamn it,” she whispers, and slides out to go investigate.

When she crawls back under the covers, a man appears next to her. “Don’t speak, don’t breathe and don’t curse, young lady,” he whispers. “Curse and be cursed.”

Then she wakes up, but not really, because she’s trapped in a dream within a dream that turns out to be her father Theo’s nightmare.

Theo (Bacon), it turns out, is stupid wealthy and married to a much, much younger star named Susanna (Amanda Seyfried, woefully miscast).

You know she’s younger because Theo grouses about how much time she spends on her cell phone, and when he tries to visit her on location at a film set, a security guard asks if Theo is her father.

Theo also has a secret, which Koepp teases for far too long to the point that when it’s finally revealed, it’s like opening the biggest present on Christmas morning only to find a gift card hidden inside. To a chain restaurant. That you’ve grown really tired of eating at. 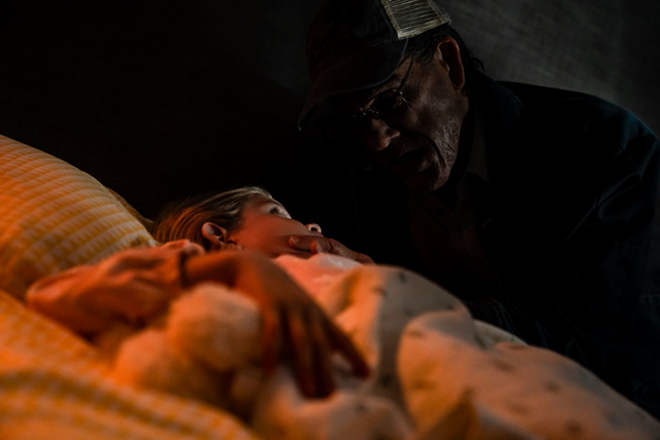 Well before Theo’s secret comes out, he tries to make amends with Susanna for being a jealous asshole by booking them a short vacation to a luxurious rental property in Wales.

The house, it turns out, is unclean. Not dirty, but spiritually empty.

As in, there’s some creepy fucker named Stetler who looks suspiciously like Kevin Bacon in bad old-age makeup, who built the property over cursed land as a way to use the house like a beacon to capture the souls of bad people.

None of that is explained sufficiently, succinctly or even surreptitiously.

Koepp’s script, which is based on a book, pretty much leaves out any exposition about the house’s history or Stetler’s origins until late in the third act when you no longer care why nothing interesting is happening.

Which really sucks because “You Should Have Left” shows promise, especially whenever the house itself is allowed to take center stage. The detailed set design and the sprawling enormity of the mansion are quite impressive, particularly whenever Theo takes a dream walk deeper into madness through its corridors.

As a big fan of both artists, it wasn’t easy to suffer through “You Should Have Left,” but the truth is they have both made far worse creative choices (cough, “Mortdecai,” cough, “R.I.P.D.”) in their respective careers.

Still, you never want to watch a film with a beloved actor like Bacon and wonder why they even bothered to show up on set.

Here’s a thought: Maybe he should have left.