The viral video star talks about what the South gets wrong — and right. 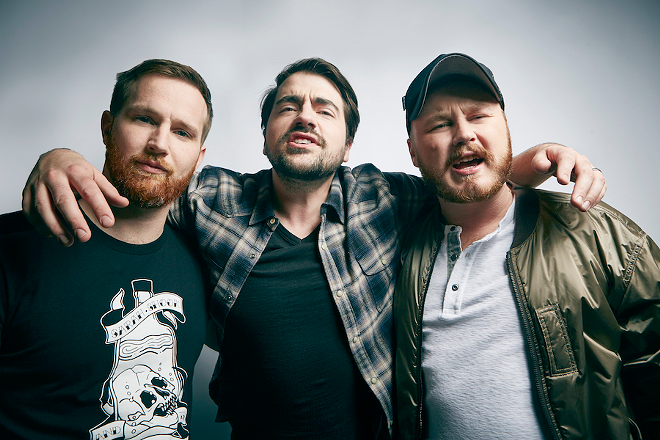 Trae Crowder’s pretty great. I’m not just saying that because I agree about 150 percent with what he and his buddies say in their book, The Liberal Redneck Manifesto: Draggin’ Dixie Out of the Dark; I say that because he’s a pleasure to interview and a straight shooter. Here’s what he told us about Donald Trump, the Deep South and living in Southern California.

I first saw you perform in September 2016, before our most recent presidential election. What’s the biggest change you’ve seen inside the Deep South since the election of Trump?

The thing that blows my mind the most about all of it — and this has been true since the very beginning of the Trump phenomenon in the Deep South ­— is that I mean I still can’t believe that they got on board with this dude in particular, because I grew up in the very rural Deep South. My whole childhood — and I know for a fact — if you would have polled people around there about what they thought about Donald Trump prior to whenever it was he first went after Barack Obama, any year before that, you asked them what they thought about him, it would have been pretty much universally negative. So many people I grew up around ... just couldn’t stand a loudmouth, blue-blood, silver-spoon, Yankee huckster, charlatan guy who thinks he’s better than everybody else. He would’ve been reviled. And the thing that’s always been crazy to me about it was the first thing that ever was crazy to me about it, which was I still can’t believe that it’s this dude in particular that has become their champion.

Do you feel like you’re making any inroads in the Deep South with advice you give in the book, or do you feel like you’re in an echo chamber?
A lot of people don’t like this answer but it is an honest answer in terms of reaching people on the opposite end of the political spectrum where I’m from, like stereotypical far-right redneck types? No. I don’t think I’ve done very much of that at all. I don’t know how possible that really even is in my opinion, especially for a comedian.

Having said that, one thing I have gotten a lot of and still do is people not from the South, who have never been, who tell me that we — Drew and Corey and I — have changed the way they look at the South in general, or southern accents, or white men from the South; i.e., that they literally didn’t know that people like me even existed until they saw one of my videos or what have you. And that also was very important to me. I mean, I wish that I could change people’s lives politically and I wish for a lot of things to change politically in this country, but I don’t know how much of that is really feasible, but if I can maybe change some people’s perceptions about where I grew up, that’s also super important to me, and I do feel like some of that actually happens.

What do you miss the most about Tennessee?

Well, as of late, it’s been barbecue. I haven’t really found a good barbecue. I’ve heard that it exists...

But also in football, going to away games and the actual season of “autumn” doesn’t exist in Southern California. They don’t have that; they don’t have any seasons. There’s just one long season. I mean, if you’ve got to have just one, it’s the best one to have. I miss the fall and I miss being around other people like me. I don’t exactly fit in here. I’m still enjoying it; politically, I’m surrounded by a lot of like-minded people.

In  your book, you write that “screaming about your right as an American while rocking the Confederate flag is like arguing against gay marriage with a dick in your mouth.” Can you try to explain to people outside the Deep South why people insist that it’s “heritage, not hate?”

Because of Lynyrd Skynyrd, it hasn’t always had the same level of irredeemable vitriol around this Confederate flag as it does now. My dad, he’s the reason I am the way that I am. He’s got a gay brother. And he was the farthest thing from racist; he raised me to be open-minded. And he had shirts and stuff that had the rebel flag, although most of that had to do with Skynyrd at the time. My dad passed away a few years ago, and I am very confident that if he was still with us, [with] everything going on revolving around the Confederate flag now, he’d put it behind. But it is cut and dried now. At this point there’s no redeeming it. It means exactly what most people say it means: that you’re intolerant at best and downright hateful and dangerous at worst. To shove that flag in people’s faces at this point after everything that’s happened in Charleston and in Charlottesville and everything ...The people that are still dusting off those old arguments as you said a bit ago. Now? Present day? I’m not going to defend that mindset. It’s been a complicated thing for me, but it’s not anymore. It hasn’t been for a while now.

You wrote in the book that y’all want to change the South “for the better.” How do you see that happening other than old people dying and new people learning better?

Well now you’ve stumped me, because honestly you gave the answer that I was going to. That’s not the only way but I do believe that’s the main thing that’s going to happen. The South has changed in my lifetime; we’ve still got a long way to go. But we’ve also come a very long way. Things have gotten way better. There’s a whole lot of work to be done, but it’s moving in the right direction. And I think that will continue,  especially as [laughs] the older people die off and people keep learning and having new experiences.

You'd laugh if you knew how many events you'd know were happening in Tampa Bay — so why not subscribe to Creative Loafing's weekly Do This newsletter?