Man on a Mission: Fabien Cousteau

The grandson of the world's most famous oceanographer will be in St. Pete for the BLUE Ocean Film Festival.

Surprisingly enough, Fabien Cousteau doesn’t drip with brine, nor does he have gills.

But Cousteau, who recently completed his landmark Mission 31 oceanic expedition, might be as much fish as man.

As a child, Fabien joined his grandfather on exploratory missions around the world. He learned to dive when he was 4 years old, knew ocean spray as well as he knew rain, and is admittedly more comfortable underwater than on land. Forty years later, salt water still flows through his veins.

Mission 31 took Cousteau — and a small team — 63 feet below sea level just off the Florida Keys, to Aquarius, the world’s only self-sustaining sea lab. Over the course of 31 days, they explored — more so than ever before — the limits of human physiology and the quality of ocean life. The mission trumped his grandfather’s previous efforts to research marine life from a sea lab — the Conshelf II mission 50 years ago — by one day and double the depth, thus offering far more insight into the ocean life that still remains so largely a mystery to us.

“We’ve explored less than 5 percent of our oceans to date,” Cousteau says. When most think of exploration, they look up; Cousteau looks down, toward inner space rather than outer space. “We spend 100 times more on outer than inner exploration.”

Our planet is the only known oasis in the universe. We treat our oceans as if they were an endless resource, Cousteau says, but our resources are running out.

“For the first time in the history of this planet we are experiencing a mass extinction caused by one species: us,” he says. “Without a healthy ocean there is no such thing as a healthy life.”

Cousteau believes that the ultimate solution is education, the essential building block to improving our planet. Mission 31 sent a live feed from the sea lab directly to the expedition’s website. It also broadcast live to classrooms around the world, allowing real-time interaction in experiments and expeditions for students. Cousteau used that opportunity to reach as many people as he could around the world, empowering them to cherish the oceans in a way that hasn’t been seen since his grandfather’s era, he said.

His goals sync nicely with those of the BLUE Ocean Film Festival & Conservation Summit, which begins next week in downtown St. Petersburg. He’ll be at the festival to premiere his documentary, Mission 31, on Tuesday, Nov. 4, at the Mahaffey.

“He’s beating the drum and keeping the dream alive,” says Wit Ostrenko, director of Tampa’s Museum of Science and Industry. “The name Cousteau has just always been the family that’s been the biggest marketing group for the health of the ocean.” 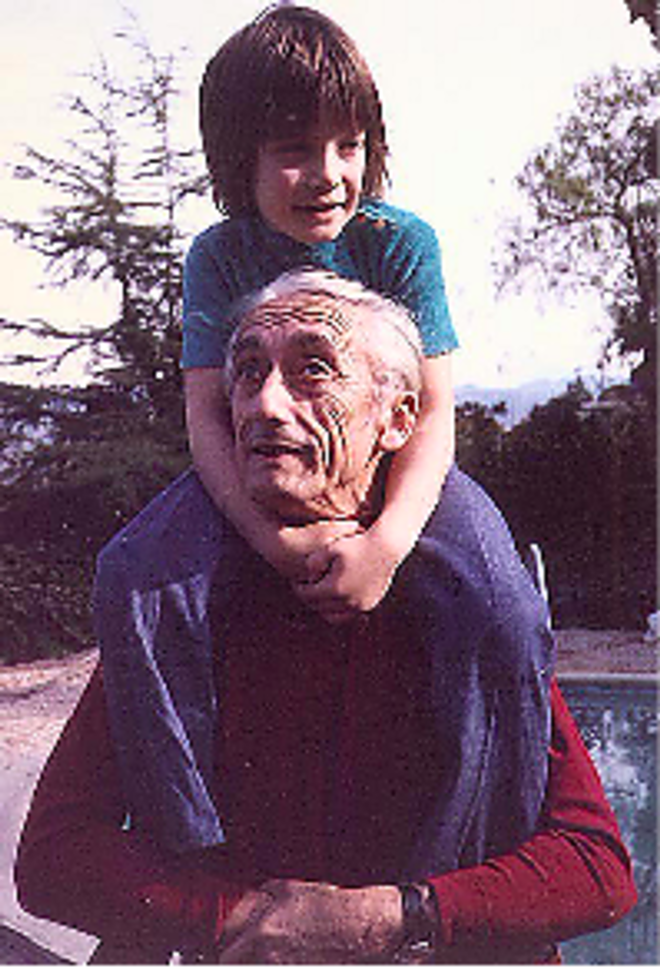 ANN-MARIE COUSTEAU
FAMILY TIES: A childhood photo of Fabien with his grandfather, Jacques-Yves Cousteau.
Ostrenko and many others in the science community echo Cousteau’s concerns about the condition of the world’s oceans. Ostrenko has attempted to foster more ocean research at MOSI, especially with regard to the Gulf of Mexico, but has met with resistance due to a lack of public interest.

He believes that Cousteau’s reach, and the excitement he projects, can bridge the gap between awareness and research as well as spark a desire for education.

Schooled as an environmental economist, Cousteau himself hopes to be able to teach our budget-conscious society the value of conserving fish populations.

“We stopped hunter-gathering on land some 30,000 years ago. Why is it that we’re still hunter-gatherers in the ocean?” Cousteau wonders.

Cousteau doesn’t think we have to remove fish from our diets. We just need to be mindful of what we consume and how we do so. A large predatory fish, like tuna, is a major delicacy, but its population has decreased drastically over the last 60 years. Instead, we should focus on herbivore fish that can be easily farmed.

“That way we can still provide for those fishermen who rely on that industry and maintain some sort of sustainability, while providing for those who rely on the food source.”

Whether lecturing or speaking one-on-one, Cousteau has an infectious passion in his voice. His love for the ocean is only matched by his desire to spread his knowledge, a trait he credits to his grandfather.

“It’s a powerful force to listen to what he has to say,” Ostrenko observes. “He’s producing a virus that we need to all catch.”