On it, Gabrielle Calise brought in some of the state's best writers. Photo by Kathryn Varn
Calise was just nine years old when she moved to Florida, and remembers being excited but also somewhat grossed out and confused by her new home.
It was feet and retirees that brought Gabrielle Calise to Florida.

“My parents were podiatrists,” she told Creative Loafing Tampa Bay. Mom needed a new job, which meant the family had to move out of Cleveland. “There’s a lot of old people with some messed up feet in Florida, so that was kind of where the opportunity was.”

Calise was just nine years old and remembers being excited but also somewhat grossed out and confused by her new home. “It was so hot. The lizards are running everywhere. You have flying roaches. I was like, ‘Where are we? What is this?,’” she added.

Eighteen years later, Calise is a bonafide guide to all the offbeat, quirky and quintessentially Floridian corners of this crazy peninsula we call home.

Her tour comes in the form of “Florida! A Hyper-Local Guide to the Flora, Fauna, and Fantasy of the Most Far-out State in America,” a nearly 600-page bible with a puffy, pale-almost-pastel-pink cover that’s more or less soft enough to sleep on after the second bottle of wine you had because you didn’t want to stop reading the damn thing.
The book—published by A24, which immortalized our state in films like “The Florida Project,” “Zola” and “Spring Breakers”—can be used as a road trip planner, but is a trip in itself.

Each chapter has its own gatefold map and is named for a region of the state: Panhandle, North Florida, Gulf Coast, Central Florida, Space Coast, South Florida, and The Keys. The pages are plastered with new and vintage photos, often laid out full bleed. Designers Jordi Ng and Elana Schlenker tie it all together with strikingly playful illustrations from Gabe Alcala, who also fronts revered Miami garage-rock band Jacuzzi Boys.

Calise, 27, said hers was never much of a Disney family; similarly, the book she edited and wrote a big chunk of eschews tropes and avoids the Mousetrap. Instead, readers are transported to small towns, natural wonders, and brick-and-mortars that define life in so many places that don’t appear on most maps. Boca Chita Key gets some ink, as do ghost towns like Pinecrest, the caves in Marianna, and “The Psychic Capital of Florida” Cassadaga. There are recipes (honeydripper, anyone?), essays, how-tos, and even an ode to Publix from “Wait Five Minutes” podcaster Nick D’Alessandro.

While some snot-nosed, know-it-all locals will feel a familiarity in certain sections of the book, the collection of work packs surprises on seemingly every other page.

“I think the Panhandle probably had the most ‘What the fuck?’ moments. There are so many weird traditions they have up there. It just feels very, very different,” Calise said before immediately explaining worm grunting, which is basically the practice of turning worms out of the ground like a snake charmer.

The WTF-ness trickles down to Marion County thanks to herpes monkeys, but Calise and the Floridians she tapped to help write the book—including D’Allesandro, Tyler Gillespie, Jason Katz, Ashira Morris and Kathryn Varn—also don’t dance around truly fucked up aspects of life south of South. Paradise Park, a segregation-era recreation area for Black Ocalaians not allowed at Silver Springs, is documented along with the dystopian new urbanism of Seaside where “The Truman Show” was filmed.

“I think the biggest thing that people didn’t understand was just how much we put in there. There’s so much reporting. It’s not just a bunch of pictures or diagrams or things like that,” Calise added. 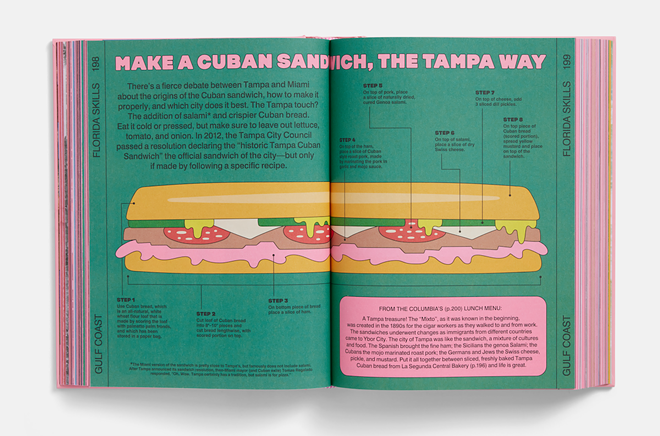 One of the many two-page spreads is an essential guide to making a Cuban sandwich the Tampeño way (step five: salami, thank you very much). Elsewhere in the Gulf Coast section, multiple Best Of the Bay-winning author Gloria Muñoz pens a tribute to the Weeki Wachee mermaids while Randy Constan (Ybor City’s real life Peter Pan) takes readers to a historic district dance mecca The Castle.

Calise even oversaw a different kind of spread featuring the dangling dongs and bare naked bosoms of Pasco County nudists—something that she might not have been able to pull off in her day job.

“There’s a lot of things that they have let me do,” Calise said about the Tampa Bay Times where she started as an intern in 2018 before eventually carving out a culture and nostalgia beat for herself two years later. “But for this I kind of got to let my hair down even more, which I really appreciated because it’s a different type of audience, and you can be a little more free.”

And free is what A24 really let Calise be for the project. Initially, the company even said she could write the entire book herself.

“But I didn’t want that. I wanted there to be people who had ownership of their part of Florida, if that makes sense. I know the Gulf Coast really well, I know other parts of Florida really well, but I don’t know everything, right?,” she added. “I wanted to bring other people along and kind of pass them the mic.”

So local voices, from the bylines to the sources, are exactly what you get. It’s a good thing, too.

A theme that continually came up in the year it took to take “Florida!” from inception to the final product was the rest of the country’s exponentially-growing fascination with, and migration to, our neck of the woods.

“It’s hard to fall in love with a place, and to be raised by a place, and then you look around and you see it changing. But I think that’s why people were so excited about this project,” Calise said. “It’s this huge platform to really document things that we love the most, are just confused by, or lovingly poke fun at, about our home state. No matter what happens, there’s always going to be this great big pink book that’s sitting on someone’s shelf somewhere in the world.”

Calise is happy being a twentysomething in Florida for now, but admitted that the rising cost of living and “climate stuff” means she, too, could end up elsewhere on the globe. But if she does leave, it won’t be feet that do the job.

“I don’t know what’s gonna happen, or if I’m going to stay my whole life here, but right now it’s perfect,” she said. “When it’s underwater, maybe I’ll get a boat and paddle away.”