Riki Lindhome and Kate Micucci bring their jokes and tunes to the Straz's Ferguson Hall this Friday. 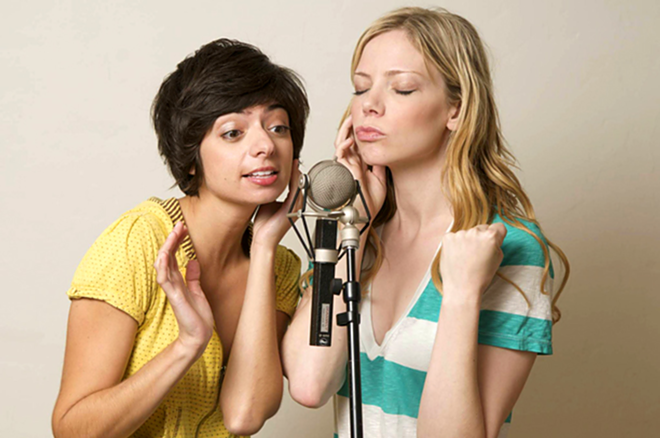 
What happens when a small-town band-geek grows up into beautiful songbird? She heads to L.A., joins the Upright Citizens Brigade, co-stars in some TV shows and forms an act with a like-minded and equally talented and fun band geek grown into a supercool woman, brought together by a comedian famous for being stoned all the time.


Garfunkel and Oates —  aka Riki Lindhome, 35, and Kate Micucci, 30 — star in their own IFC show and live comedy-music act. Both are originally from Pennsylvania (they joined forces for G&O in L.A.).

Lindhome and Micucci are often inspired by real-life situations for their tunes and bits (and TV show). Though they are attractive women, they keep their looks low-key most of the time (they work it occasionally but without taking themselves too seriously). Guest stars on their show have included Chris Hardwick, Weird Al and even Sir Ben Kingsley.

When playing live, both sing; Lindhome usually plays guitar; Micucci plays the ukulele. The duo's two albums, Slippery When Moist and All Over Your Face, hit No. 1 on the iTunes comedy charts. Song topics range from accidental pleasures  ("Go Kart Racing") to post-breakup independence "My Apartment's Very Clean Without You" to how easy it is to get medical marijuana in California ("Weed Card").

IFC
RIGHT OUTTA THE '70S: A frame from G&O's opening credits.
Garfunkel & Oates are as lovableas they are raunchy and clever. They're two women who have the moxie to name themselves after two of rock's "second bananas" and have the talent to back up their cheeky shtick.

CL caught up with them by email before their Friday appearance at the Straz Center.

Doug Benson is in town the same weekend! You're friends — he introduced you two, right? ... Any chance you're going to team up while you're here? Would you have any plans any chance to go on his podcast screening in Tampa Saturday at 4:20?

Lindhome: We love Doug! But we aren’t collaborating in Tampa.

Why do you think you two have such great chemistry onstage and on your TV show?

Lindhome: We started out as friends before we worked together and being in this band has only brought us closer. Going into a creative partnership is an intimate endeavor that involves a lot of trust and compatibility. We feel like it’s helped us learn how to be in a relationship.

"Pat Robertson once said
'It's a long downward slide
That'll lead to legalizing sex with ducks
If two men can stand side by side'
God, I hope he's right
'Cause if gay marriage becomes lawful
Gonna find myself a duck
And legally do
Something awful"
—"Sex With Ducks"


You both grew up in Pennsylvania, right? Were your childhoods at all similar?

Micucci: Yes. We had very similar childhoods. We both grew up in small towns and spent most of time playing music. In fact, we first met at music camp in fifth grade.

Can you share a recent run-in, situation, observation that have inspired a tune or bit in your act?

Lindhome: We went to a baby shower last year that inspired the baby shower scene in our IFC show. We took dialogue verbatim from the actual day.

What was it like meeting and working with Fred Savage [he directs their show on IFC]. Did you grow up watching The Wonder Years?

Micucci: We love Fred! He felt like the third member of Garfunkel and Oates during our shoot. It was a bit surreal at first because we did grow up watching Wonder Years but he quickly went from child star Fred to just our director. He is a great collaborator and friend.

As a writer, I admire the quick-wittedness and clever references in your song lyrics. You go from Balzac to ball sack, Descartes to Marcia Gay Hard-on. Do you two trade off on writing lyrics or do you compose together?

Lindhome: I am more of a lyric person and Kate is more of a melody person. But after we each do our first pass, we form the rest of the song together.

I hear you are friends with John Oates. What kind of feedback does he give you about your act? Have you heard from Art?

Micucci: We’ve never heard from Art but would love to. John is a great guy. He’s never given us feedback on our act, other than that he likes it, but we have played with him on stage and that was an amazing experience.

Any updates on whether the IFC show is being renewed or Riki's new Comedy Central show, Another Period?

Lindhome: We just wrapped the Comedy Central show last week and have begun editing. It was really fun and Kate was in a lot of the episodes. We haven’t heard if our IFC show has been renewed yet but we are crossing our fingers!