Noelle Mason’s show at HCC-Ybor takes the viewer on a psychologically armed and loaded trip to the U.S.-Mexican border. 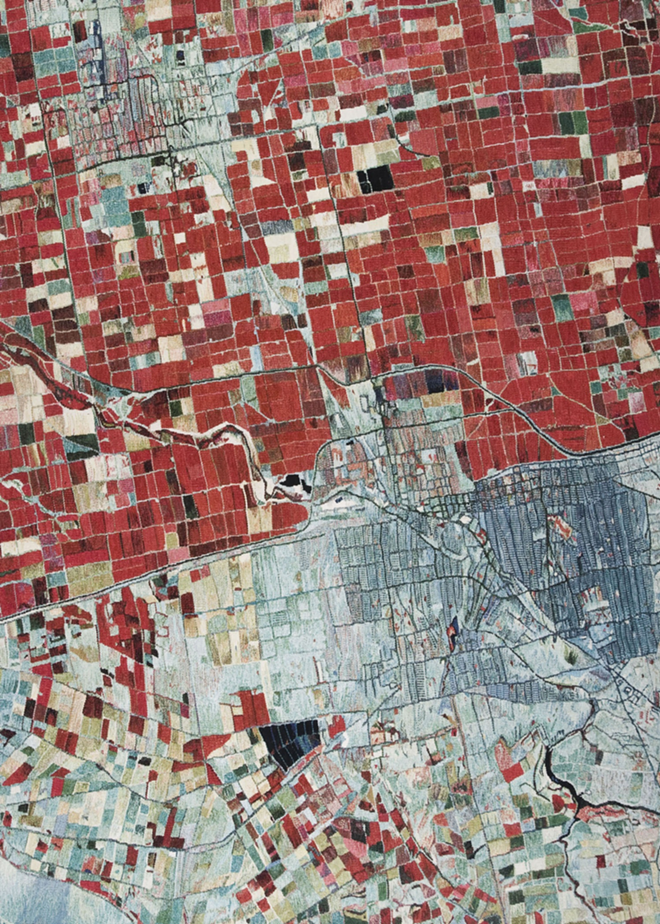 Thirty years after the fact, Noelle Mason jokes that her childhood might have been a little odd. For starters, her father was a SWAT team sniper while she was growing up in San Diego, Calif. One of her early memories involves watching television coverage of the San Ysidro McDonald’s massacre, a 1984 killing spree just north of the Mexico-California border that left 22 people dead, while her dad was on duty there. (A SWAT sniper who wasn’t Mason’s father ended the hour-long horror by shooting killer James Oliver Huberty, who had announced earlier in the day to his wife that he was going “human hunting” before targeting the McDonald’s.)
Mason remembers the event as strangely exciting—she was 7-years-old at the time, around the age when most children are still in the process of apprehending death as a real and permanent end to life—and how later her mother warned her that if she was ever caught in a public shooting, she should roll around in blood on the ground and play dead.

“If you want to psychoanalyze it, that’s probably where my interest in surveillance and the politics of the U.S.-Mexico border come from,” Mason says.

On Monday, the HCC Ybor School of Visual and Performing Arts Gallery opens Transliminal, a solo exhibition of Mason’s work about the border and the role of visual imaging technologies in policing and revealing conflicts over human lives and natural resources. It’s not the only subject Mason makes work about. Other recent projects have driven the artist to skydive with a low-tech, pinhole camera strapped to her head, and to grow psychotropic mushrooms planted in paperback copies of banned books—some, like William S. Burroughs’ Naked Lunch, particularly apropos. Fusing her background in performance and sculpture, Mason’s work almost always explores an intriguing boundary or some experiential limit that she finds tempting to cross.


In April when I visited her studio—in actuality, a classroom at the University of South Florida, where Mason teaches, set up as a temporary studio for our visit—she was mulling over whether viewers would perceive the Transliminal exhibition as sparse because it consists primarily of three large rugs, which she plans to display on the floor. Only a set of ten small cross-stitch embroideries will go up on the gallery walls.

Placing the rugs on the floor, though, and letting viewers walk on them, accomplishes one of Mason’s key conceptual moves. Woven into the rugs are satellite images of contested border zones taken by NASA’s ASTER electromagnetic radiation imaging system, a joint project between the U.S. and Japan. The images fascinated Mason when they began to circulate publicly in the 2000s because of their estrangement from everyday human reality. Vibrant with surreal pseudo-color (the artificial hues assigned to information outside the spectrum of visible light) and etched detail, the pictures turned messy, sometimes violent, sectors of human conflict into highly aestheticized landscapes.

In the rugs, the omniscient, God’s-eye view of the satellite images is weirdly and wittily translated back into humble embodied experience. To create them over a period of several years, Mason sent choice ASTER images (readily available via Google) to a two-man team of rug weavers in northwestern Mexico specializing in the hand-knotted Gobelin technique, which dates back to the 15th century in France. With the weavers, Mason negotiated a size for the rugs based on the then-current going rate for a human trafficker—a “coyote”—to transport a family of four across the border from Mexico into the U.S.

In 2006, around $8,000 bought her a nine-foot by six-foot rug impeccably woven to resemble a satellite image of the border city dyad of Calexico, California, and Mexicali, Mexico. Strikingly, the rug shows the disparity between lush agricultural land surrounding Calexico, where an offshoot of the Colorado River is sapped for irrigation, and the desert surrounding Mexicali, where water is in shorter supply and severely polluted. (The rug adopts the color-coding of the original image, in which the desert is pale blue and the farmlands red.)

Several years later, Mason had nubby, hand-knotted versions made of the border between El Paso and Ciudad Juarez, still regarded as one of the most dangerous cities in the world for its homicides and drug trafficking, and a depleted Colorado River Delta for about $11,000 and $13,000 each. Mason’s complementary cross-stitching project is, if anything, more disturbing. With ten smaller works, she creates hand-stitched renditions of X-ray photographs taken at the U.S.-Mexico border of immigrants tightly packed into trucks, and night vision images of figures in transit across the desert. (Half were hand sewn by Mason and half by an embroiderer based in Mexico, employed for the price of smuggling a single person into the U.S.) Culled by Mason from American militia and patriot websites, where the pictures are posted as a kind of human hunting porn, and re-contextualized in the gentle, domestic art of cross-stich, the images take on a delirious mixture of meanings. Are they cruel or kind? Exploitation or advocacy?

Like the real-world border, that indeterminate zone of meaning—right where Mason seems to want you to be—can be an uncomfortable place.