American Stage takes audiences on a fun if lightly packed trip back to Oz. 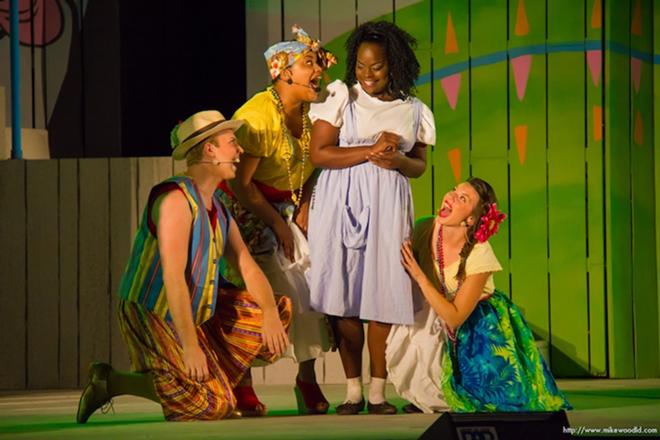 Mike Wood
NOT IN KANSAS ANYMORE: From left, Scott Daniel,Tia Jemison, Whitney Drake and Georgia Mallory Guy in The Wiz.

The 75th anniversary of The Wizard of Oz has movie fans skipping down the Yellow Brick Road of nostalgia, but for some of us, that path is a tad too well worn.
American Stage at least deserves some credit for zazzing things up with The Wiz, the 1970s soul spin on Frank Baum’s classic. The original New York production of the play opened at the Majestic Theater on Jan. 5, 1975, starring Stephanie Mills, whose sweet voice you may recall in the disco hit “Never Knew Love Like This Before.” A few years later the story made it to the big screen starring Diana Ross and Michael Jackson.

Directed by Karla Hartley, the production recalls the type of performance you’d see in theme parks or cruise ships (where, incidentally, several of the show’s cast members have headlined). The show’s high points are the soul-stirring belt-outs of “Ease On Down the Road” and other choice numbers backed by Michael Raabe and his funktastic band, but there’s no sweeping story, nor are there richly drawn characters to give it added dimension. This is an ADD-friendly trip to Oz.

Which means it works just fine for those (maybe most of the audience?) who go to American Stage in the Park to  enjoy a picnic in the fresh air and don’t need to get too absorbed in complexities.

The show’s pleasant humor and exceptional talent sustains it. It’s a touch burlesque with a few amusing PG moments — such as a police bust and opium den allusion after the Cowardly Lion — played brilliantly with a fun twist by female actor Sara DelBeato — frolics in the poppy field, or the Wicked Witch of the West’s darkly comic slavery operation. A slo-mo interlude in the second act is one of the play’s most ingenious scenes.

Whitney Drake as Dorothy brings nuance and an assured charisma to her ingenue role. The large and in charge Sharon E. Scott, as expected, delivers a powerhouse performance. She portrays Auntie Em, a pointy-bearded Wicked Witch of the West and Glinda the Good Witch with equal ease. Chris Walker makes a notable American Stage debut as the Tin Man, and 2012 Blake High grad Torrey Thomas turns in a memorable Scarecrow too. Darryl Reuben Hall as Uncle Henry and The Wizard is a force to be reckoned with.

Also, big props to the sassy and spunky ensemble players — Scott Daniel, Georgia Mallory Guy, Tia Jemison, Jesse Rodriguez, Rodner Salgado and Allyson Tolbert — who play munchkins and a host of other sideline characters. They offer comic relief that speeds things along. Choroegrapher Domenic Bisesti keeps them all deftly moving. Saidah Ben-Judah’s costumes give the play the proper dreamlike and fanciful flair with nods to Cajun and African cultures.

Scott Cooper’s abstract urban graffiti-painted set is somewhat creative if a little confusing; we like better his giant sunglass-wearing Oz contraption. Note to both the sound engineer and attendees: The high frequencies caused some discomfort for folks in the seated section by the speakers.

Beer 101 fun. Jobsite Theater presented Wish Experience’s first Tampa performance of A Brief History of Beer at New World Brewery on Easter Sunday, but holiday obligations didn’t seem to diminish support. An audience of around 75 filled tables and chairs set up cabaret-style on New World Brewery’s outdoor patio, spilling out into the open-air courtyard. CL couldn't make it to the show but got some feedback from TheatreUSF Professor Dr. Patrick Finelli about University of South Florida alumni Will Glenn and Trish Parry. “Trish and Will are actors who know their audiences well and the response of the crowd was tremendous,” Dr. Finelli said. “Having honed their performance at festivals and venues across the globe, the show has the feel of an international beer-themed attraction complete with original quasi-historical films and a Star Trek journey through the ages of beer.” There is one more Tampa performance of A Brief History of Beer (after this they’ll be heading to Fringe Festivals in Orlando and Cincinatti), this Sunday at 8 p.m. Tickets are $7 at the door. New World is at 1313 E. Eighth Ave., Ybor City. More info at JobsiteTheater.org/Beer.